The best jugs in town! 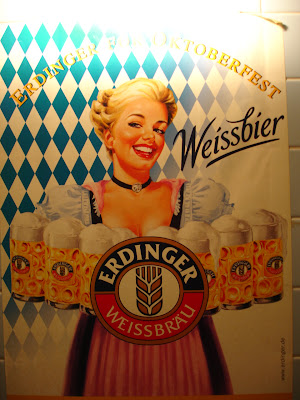 Recently (about an hour ago) I was inside the Great German Cook. Perhaps a misleading sentence to start my entry with, I suppose. This Great German Cook is actually a German beer bar/restaurant, in Tsurumi.
The webiste for the GREAT GERMAN COOK. 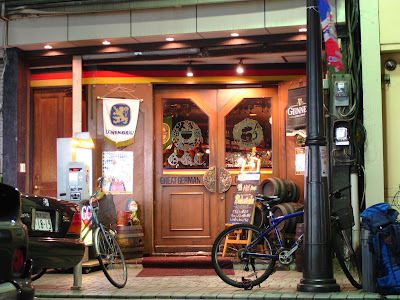 Once you find it, you will find it a very accommodating place.
A really nice, relaxed atmosphere, although slightly smoker friendly. Temperature-wise it's cool at the front but a lot warmer at the back, near the kitchen. Seated tabled benches for around 50 and bar stools for around a dozen at a squeeze. The beer is well popured by a very attractive and skillfull barmaid and served by an equally eyepleasing server (can I say that without sounding like putting the women down in any way? If not, then I apologise). 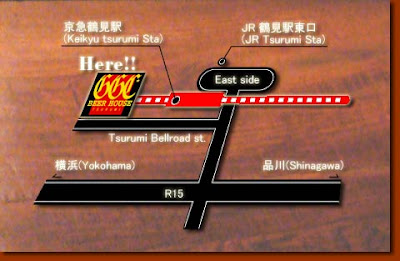 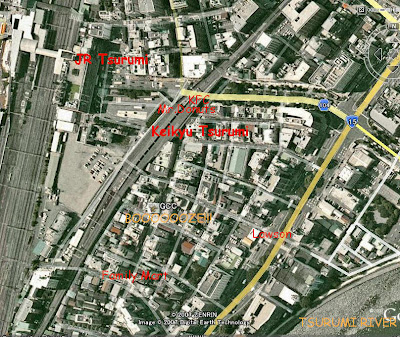 So, I take it you can find this place.

Once you're in, you'll see a few bench tables 'seating around 20 or so and then a semi-circle bar on the left hand side (past the Dutch heap), with stool specimens for around a dozen. 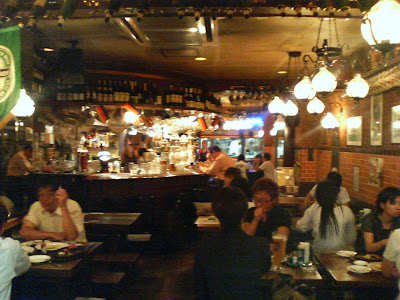 (apologies for poor quality keitai shots)
Past that are two or three tables for around another 20 and the glass partitioned kitchen on the right, with toilets on the left. 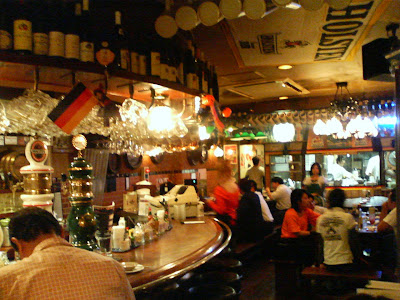 The place has been open for around 10years.
The menu, like the bar is quite impressive: 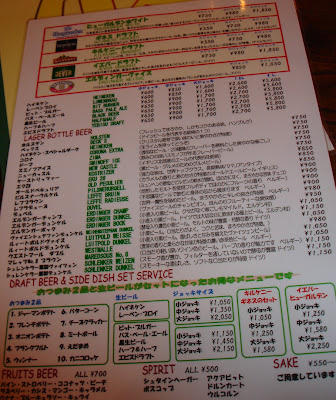 An awesome beer menu featuring at least 11 quality draught beers. Of which I can recommend the Weihenstephaner, Jever and Lowenbrau (if you let it defrost) wholeheartedly. Their house beer, Erdinger, is somewhat unusual in taste. All the 'locals ' were ordering it, however. By far the best weissen on tap was the Weihenstephaner. I regard Erdinger as the 'bud' of weissbiers, seeing as you can find it anywhere and it's totally mass produced and overhyped. I think it doesn't compare to a Schneider or other comparable beers (bit of a strange sentence, there).
They also have a nice selection of bottled beer including a few Belgians.
One point to mention is the interesting offer they have as a beer set (bottom of the menu). The price depends on the particular beer and size you choose and you can have two side orders of food for a minimum charge. Seems like good value. Unfortunately, I rushed my order and missed out on this, as, by the time I noticed it, I'd already ordered the German Potatoes.
Scheisse!!

First up was a Weihenstephaner Weiss bier: 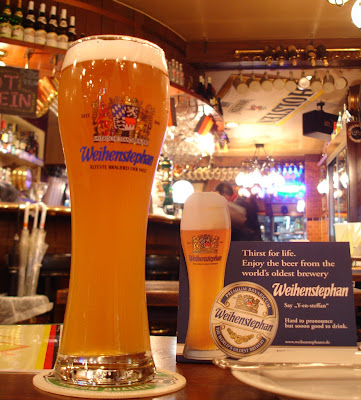 Next up, I ordered another weisse bier, an Erdinger Weissbier: 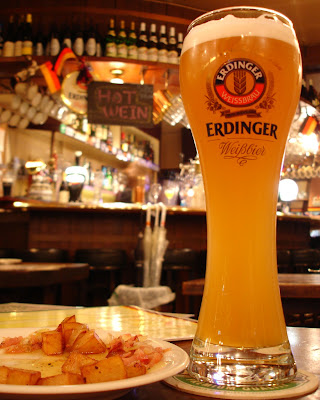 This was a slight dissapointment. Especially as I had been watching all the 'locals' ordering this beer. It seemed to be the house speciality. Pity. The Weihenstephaner was far better.
It was okay, but something was wrong. Tasted like a cross between a wheat beer and a lager. Not quite right. Not bad, though. I often think of this as the 'Bud' of weiss beers. Available almost anywhere and mass produced till the ass falls off.
1,050yen.
5.5/10

Next, I ordered German potatoes: 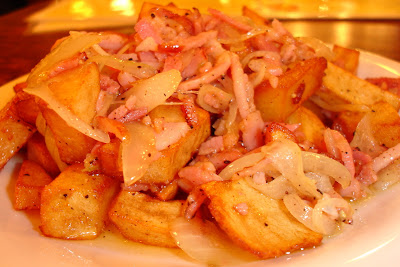 Again, not what I expected. The German potatoes I have previoulsy ordered in Japan have always been some combination of fried mashed potatoes with ham and some other 'stuff'.
These were already fried potateos, refried with some other 'stuff'.
Still, they weren't bad. just the right thing with beer, as they were very oily and salty although the garlic wasn't that evident, despite labelling them as the 'garlic flavoured' version in the extensive menu.
6/10.
(p.s. the menu is good - around 6 pages of choice ranging from Eisbein to pizza ot Japanese curry to... ...stuff.)

Then I had a Jever pilsner: 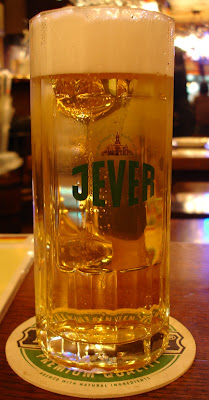 Jever is a dry German pilsner. Dry and hoppy.
This one was no dissapointment.
I had confidence in my order, due to the quality of the beer at this establishment. Other places, even Popeyes included, vary in quality from time to time. I can honestly say that this is the best Jever I have ever had. Full of aroma, flavor, hoppiness and drier than my Grandmothers' crack after a weekends unsheltered sun basking in the Mojabe desert. It was that dry - but in a good way.
But it better bloody well had be, for 980yen for a medium sized glass.
8/10.

After that, I needed some moisture. The ladies were unresponsive and now I'm a horrible sexist pig and oink oink I decided on giving the garlic toast a try. 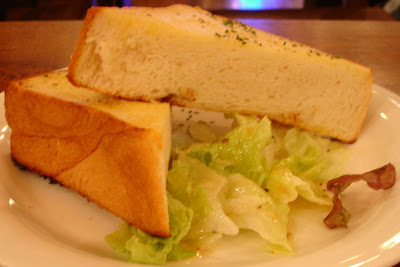 Not bad. but 'toast with just a tiny smidging of garlic' would have been a more accurate label.
It was mostly toast. there was some garlic flavor. Mostly toast, though.
480yen.
4.5/10.

Helping me to process this culinary orgasmic platelet of delights was a steiner of Lowenbrau: 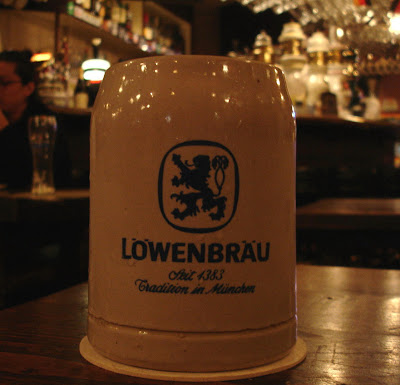 One word of advice here is to let it sit a while. Better still, ask for an unchilled steiner beforehand. Once again, Jaspanese style out trumps common sense. This lager needs to be cool but not frozen. To test my theory, order this frozen, take a few sips, then leave it to warm in your cupped hands for a few minutes, then sample it again. I guarantee the flavors and aromas will have matured and developed to a far more satisfactory degree. The beer's flavour will slowly blossom with the warmth, just as the frigid morning's etheral mist rises with the warmth of the life giving sun. Far be it from me to demand that a whole country change it's misgiven style of drinking a product that is as alien to it's ancient culture as the ABC.
Still, once defrosted the Lowenbrau was 5.5/10
Ooh! Who da beeyatch?!!!!

This place is lovely.
If it wasn't so smoker friendly, this place could be one of my favourite bars. Not far from me but also not so easy to get to, unless you have a bike or don't mind walking (although the journey, along the Tsurumi river, is quite nice).
Needless to say I do not recommend driving to this place but in a country where the trains run on time and there are stations everywhere, hopefully that shouldn't need to be an issue. Unfortunately, we don't live in a perfect world and some idiots drink before driving.
Marks up for decor and beer quality and food prices. Marks down for being smoker friendly and location (however it's close to the station but the train lines aren't that convenient).
7/10 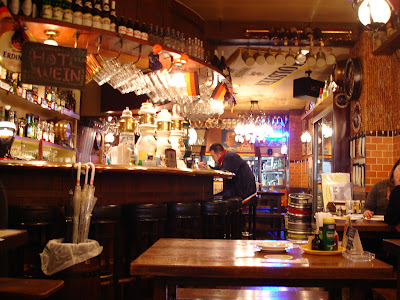