This is a great place to discover full bodied, strong, fruity Belgians, if, like me, you are a nervous virgin.
I've never understood why everyone is so enraptured by fruity beer (a common lager and ale swiller's way of summing up Belgian beer).
After almost killing myself at the Sugaya belgian beer tasting party, I decided to give this place a go.

It's situated at Kasumigaseki (on the Hibiya line).
Actually, a closer station is Toranomon (Ginza line, 160yen and 11 mins from Shibuya).
Here's a map: 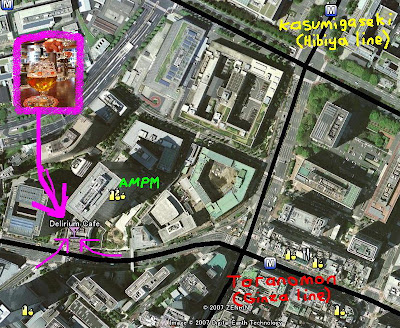 It wasn't that easy to find (at least it wasn't for me).
I went to the towering high rise building complex and everything seemed to be closed or undergoing construction.
I found some signs for Delirium Cafe and I followed them, only to find a closed building with the lights off. I didn't give up and 20 minutes of exploring finally found me on the other side of the complex and a collection of restaurants and stores that were indeed very open.

This is an estimate of my route that evening (it was in the dark): 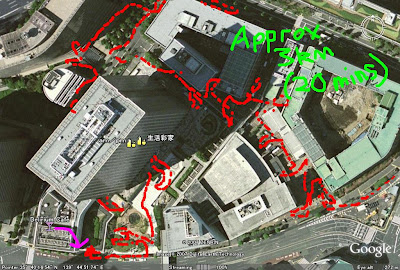 Here's a photo of the entrance to the Delirium Cafe: 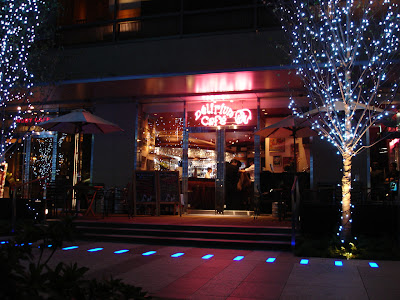 Going in, the staff were very friendly and very proffesional.
The interior is laid out very well.
First thing you see is the main bar. It forms about a 90 degree arc of a circle with high stools around it, seating around 10. The stools have convenient baskets built into the bottom, where you can store your briefcase (Kasumigaseki being a salaryman stronghold) and the stool being tall enough to hang your Jacket on. The barstaff are very well informed about Belgian beer - as they love the stuff themselves. What better person could you want as a bar steward?
I used to be a bar steward in several places (or at least that's what I thought people were calling me).

My beer tutor for this evening was Arisa. I'd met her before at the Sugaya beer tasting party (this was when I was still conscious and had some functioning brain power to give me memories).
She impressed me with her knowledge of Belgian beer and he ability to hold a conversation with me (not many people can - I tend to, what can you say, oh, it's like that time I decided to suddenly dive into the tiny river outside the place where I used to live when I was younger. Instead of just floating and having fun wading in the waist deep water like everyone else, I decided to dive straight in. I had my arms stretched out either side of my head and when I dived in, body straight, I hit a jagged rock with the point sticking out. I struck that rock and hit it with my whole bodyweight behind me. I struck it straight on my forehead and was floating around in the water unconcious for a while when something told me it wasnt right and I stood up to see the astonished looks on my friends' faces. I had this enormous bulge swelling out of my forehead on the right side and still have the bump today and now I'm reminded of the time when my little brother was about 8years old and he was for some reason, rubbing his bottom up and down the newly laid wooden bed of my father's truck. I had no idea why someone would do such a strange thing but then it was my brother and he is over 96% chimpanzee (whereas I am clearly more bonobo - far higher intelligence). He was just laughing and rubbing his arse up and down the fresh, unsmoothed wood and then suddenly he stopped and his eyes were staring straight out and his mouth was open in a silent scream. Later, my mother removed a 4 inch splinter from his ass cheek. Idiot. Anyway, where was I? Oh, yes - tangents.).
I sometimes go off on tangents. That reminds me of 2 days ago, as I tried to help a student with his mathematics. I's forgotten that a straight line leaving the centre of a circle, intersects the circumference of the circle at a tangent. I felt like such an idiot. Again.

Well, Arisa told me of this new bar and I decided to check it out.
After studying the draught beer menu: 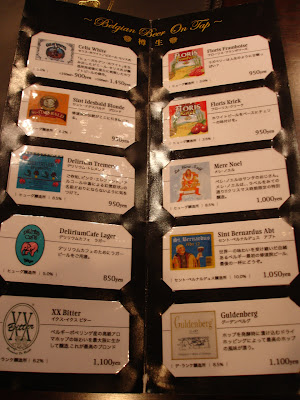 I decided (on advise) to try the Guldenberg beer, by De rank. Normall, 'rank' is not a very good name for a beer brewer or any product that is meant to be consumed. Still, this was Belgium and we all know Europeans and their smelly cheeses. I gave it a shot: 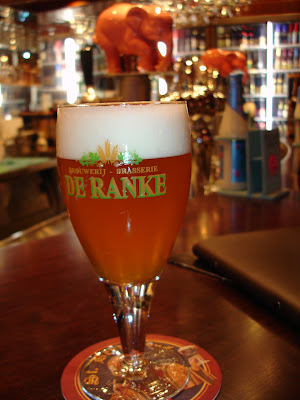 It wasn't bad. It certainly wasn't rank.
Although it was a little sour. It quite dry and hoppy. I think a friend of mine would apppreciate this beer more than I.
Still, I give it a 5.5 to6/10.
Not bad, seeing as I don't especially like Belgian beers.

The beer here was expertly poured by Arisa. There was no fake 'back push' of the tap producing artificial head, to go with the image of draught beer for the Japanese customer.
No, this process involved normally poured beer then the skimming off of the top of the foam (apparently, it improves the quality of the rest) with a silver...'skimmer'(?) and the careful dipping into fresh water of the glass, to remove the overflowing suds (a certain amount of beer goes down the drain every time - wince!) then a gentle wipe around the outside of the glass, but not and I repeat NOT with a dirty slimy coth and not around the top of the glass, where one's mouth was soon to venture.
I hate it when some bars use a cloth to wipe the top of the glass.
It's disgusting. This time, it was nice just to watch the whole process (for which I was undoubtedly paying for).
The beer was very good and served in the correct glass, too.
They have a great variety of glasses, to match their variety of 10 draught and many more bottled Belgian beers.

I decided to try the menu and also to have another beer.
I went with the Belgian fritters with the original Delirium cafe mayonnnaise.
Chips, basically. 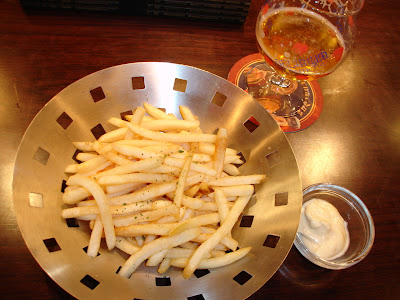 They were among the cheapest option there (yes, I am a cheap b*st*rd) and also were warm and I figured I would use the fried potato as a taste test standard for the rest of the menu.
My logic being, if the fries were crap, the chances were the rest of the food wasn't that amazing.
The fries were good.
Strange presentation but they stayed warm for a reasonable length of time.
They went well with my beer.
The mayonnaise was not bad. I'm no fan of mayonnaise but this stuff wasn't so nasty. It seemed to suit the fries.
Belgain fritters: 6/10. Not as good as Kua'aina fries. Those are (excuse me for this ridiculous and now very unPC phrase) the bomb!

My second beer was the recommended one and the one for which the cafe is famous. The pink elephant beer! 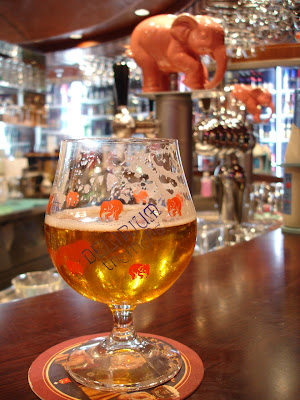 Quite a nice brew. 8.5% alcohol so take care with this particular pink elephant.
You can pet her, stroke her, but once she sits in your lap, you're screwed (she only wants you for your nuts).

Fresh from a new keg. The picture kind of suggsts that the pink elephant discretely added a special extra ingredient.
Even so, this was very nice.
I reccomend trying this,, if you visit the bar. After all, it's their trademark beer.
After all, when in Rome, do as the Romans do (ride around on scooters all day, shouting obcenities and gesticulating widly with your arms, then drinking your sorrows away with some buono vino rosso - still on the scooter).
When in Sparta, walk around naked and have sex with little boys. Woof!

(click on pic to open the gif in another window) 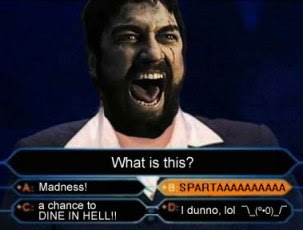 Oh, yes, I was in Sparta.
No I wasn't.
I was talking about trying the bar's reccomended beer.
These guys import their beer direct from the brewers. No middlemen.

The whole bar can probably accomodate around 50 or so customers or perhaps a whole tribe of over 200 pygmies (but they'll have to check their blowdarts at the entrance).
There is some nice tabled seating further in from the main bar. Nice and dark so a great place to take a special someone or just one of your sad male friends who also have no one of the opposite sex to drink with.
They also have outdoor seating. Great for the summer months or perhaps for any Eskimos who happen to pass thru (sorry, it's Inuit {innit?}).

If you do visit this place and you don't feel like going to the toilet, make an excuse and just go.
It's quite an experience in itself.
The whole place is lined with mirrors, so be careful where you 'let go of the day's tensions'. double check your target area, just in case.
Another warning is that I believe the toilets may be haunted.
Every time I use them and open the door, I believe a ghost has just been interrupted from 'spookus relievus', as the toilet seat magically seems to move, as if a certain 'casper' is just about to be at peace. After suppressing a girlish scream, I entered and, after I finally found which reflection was the actual toilet (not through a system of trail and error, I may add), I tried my best to perform the intended function.
It wasn't easy.
I had a little bronze boy trying to piss all over me (I bet that's not the first time you've heard that).

It's not so easy when there is a tiny little boy who is peeing without stopping, right next to you.
It's very intimidating. It's also tempting to take up his challenge and pee right back in his face. In which case you better bring along a big box of towelletes and a nice excuse for the management (I recommend blaming the mirrors).

Overcoming the mirrors and the unrelenting pissing boy, you then have to contend with the spaceship controls.
There seems to be a button for everything. 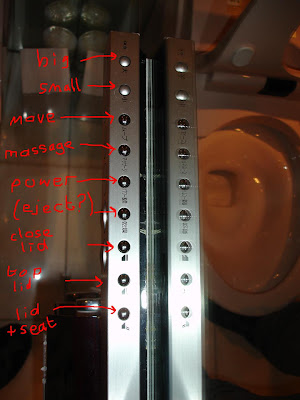 Awesome! Also, scary.
I may go back and try out all the buttons, just to see.
(Boys and their toys.)
Overall this is an impresssive, classy addition to the numerous Belgian bars around Tokyo (Frigo, Belgo, etc).

A nice addition. Classy. Not cheap but also not overly expensive and an impressive selection of 10 beers on tap. Nicely poured beers, I might add. A place to attend to remind yourself that yes, you are indeed in Tokyo. Posh with a rich Japanese clientelle.
This evening, I was drinking next to the new chef. Nice guy. I reckon the food looks very good indeed. It should be changing soon. Interesting.

Sadly, a combination of bank balance, time and the fact that I had work in the morning necessitated my departure. 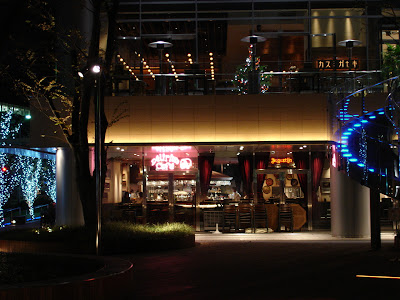 I'll be back.
To get back to Toranonomon station or the further Kasumigaseki station, walk in the opposite dorection to the Micheal Jackson glowing steps: 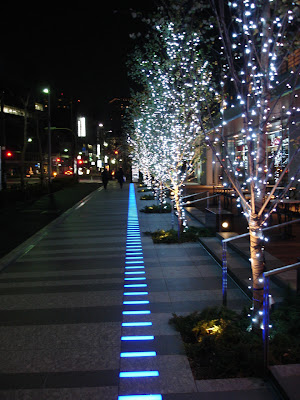 Or, if you are really extravegant, perhaps you could take a helicopter home. 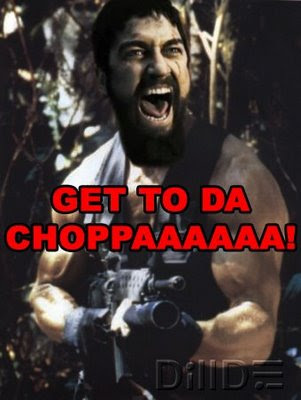