Last night, around 7:30, I got on my bike and rode. I rode all the way from Yokohama to Gambrinus.

Gambrinus is a great little bar, out in Kokubunji, way out in the West of Tokyo (about 20min from Shinjuku, on the Chuo line).

View Gambrinus in a larger map
They have about 10 rotating taps. All of good quality.
Gambrinus has been around a couple of years now. Because it's not easy to get to, I've only been there 3 or 4 times. However, they often have some special beers that don't appear in other places. The prices are normal for Tokyo (usually around 1,000yen for 420ml) & the atmosphere is relaxed and friendly.
To find it, take the South exit of Kokubunji station. 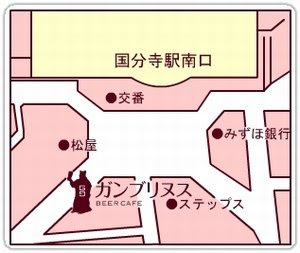 You'll see 5 streets, leading off from a main square.
Take the 2nd street from the right and walk on the left side, just behind Mos Burger.
Go about 40m and you should see this view, on the left: 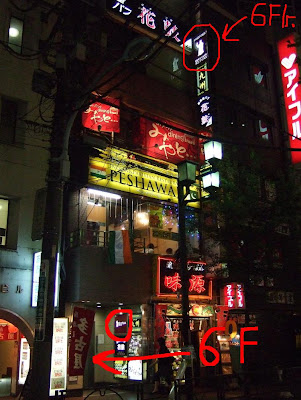 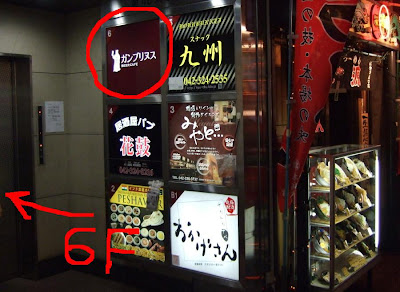 When you exit the lift, you will get to the small bar, which has seating for around 16 at small tables and 4 or 5 at the bar, on stools which I feel are too close together (nice if you are next to an attractive person of the opposite sex but not so nice when a hot, sweaty, stinky, middle aged man perches himself down inches from you and breathes continuously in your face - forced me to quietly leave, instead of ordering another pint. Bad business choice there, Gambrinus - you lost money there), plus space for around 10 standing, around 2 high tables. 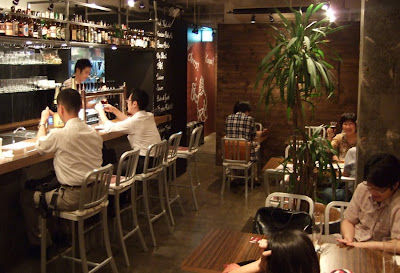 The taps seem to be a similar system to Popeyes, Aldgate, Ushi Tora, KuraKura, etc. I didn't ask Shin san if he used the Popeye's Aoki san's system of taps, as the other bars have.
He has around 9 or 10 CO2 assisted taps plus one Yona Yona handpump.
The beer quality is always very good. Prices are normal to moderately expensive (Gambrinus was 1000yen for 420ml but 1600yen for 570ml!). The head size can be a little on the large size, so don't be shy about asking for a small head, as he starts to pour or just before. The guy knows his beer pretty well so he can adjust for you.

Here's the Gambrinus premium I came all that way for:

Gambrinus is my favourite Czech beer. I like it because it's good and malty but also a little dry, as Czech pislners can be.

This one, whilst not being as good as I remember was nice and dry tasting. Not too much malts in the flavour, though, so a tad dissapointing. I would have much preferred to have it in a wider glass, so I could get my face in there and savor the aromas. A big steiner would have been nice. I feel the glass design looked pretty but did little for the beer style. Pilsner glasses have often been tall and straight, but for this beer, I really want to get my face into it and savor the maltiness. Still, it was nice and went down easy.
Gambrinus premium - 6.5-7/10 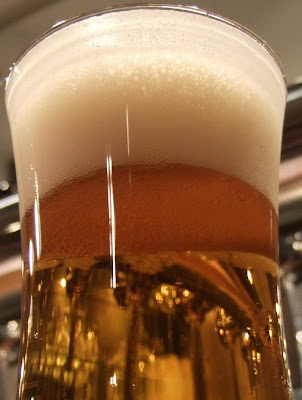 Nice creamy head on this beer. Well poured (if not a little too much head for my tastes).

As the slightly smelly, heavy breathing guy sat right tight next to me, I decided not to have an Ozenoyukidoke IPA next, and just left.
Pity, I really wanted another beer, but those stools are just too close together for me to enjoy anything without worrying that the guy next to me would drop some nasal hairs into my beer.
Negative popints for Gambrinus to try and squeeze in too many people. One less stool would allow more space for a much more relaxed atmosphere and better business.

The food here is also good, as I can attest to.
I enjoyed the smiley potatoes once: 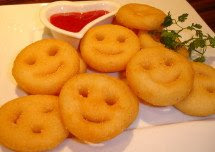 (they are not French fries but just deep fried, processed potatoes but look and taste good)
From what I saw on a previous visit, the fish and chips look good.

All in all, Gambrinus is a nice little bar with a friendly, knowledgeable owner, Shin san, who often has on tap a very good selection of 10 or more craft beers.
A recommended visit.
Gambrinus beer cafe - 7/10
p.s. to get there and back, I had to cycle almost 70km and got lost twice.