The other week, I happened across a new bar called The Thrash Zone.
Idf you check out their WEBSITE, you will see they have a propensity for slayer and other heavy metal.
They also serve some quality Japanese craft beer.
Both of these points were good reasons for me to make my way out there!
It wasn't so easy to find, but once you located the yakiniku restaurant, it was easy.
In case you can't find it on the website, you can open the map in a new window by clicking HERE.

Also, on the webiste, it shows a big, bright, airy room. The first thing I noticed upon entering was that the picture in the website wasn't of The Thrash Zone. Weird.
Here is a photo from inside, on the side opposite the entrance way (seen at the end of the room): 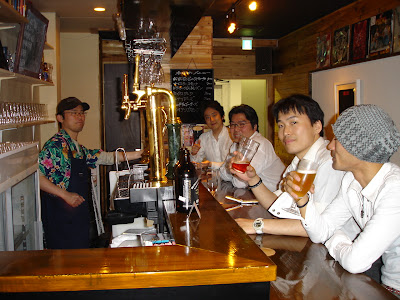 You can see the barman/owner and a few of the regular customers, who come from as far away as Ryogoku! Some of you who know about beer may realise that Ryogoku is actually the station where you can find Popeyes (perhaps the biggest range of craft beer in Japan and of Japanese craft beer in the world). So it says something for this bar that this gentleman journeys all the way down to have a drink or five at this place.
These guys were great and welcomed me into their fold, instantly. Everyone was so friendly.

I happened to venture in on Van Halen night. The manager was showing his DVD of Van Halen's greatest hits.

When I saw this, I jumped for joy. I told the barman "Right now, I feel unchained! You really got me with this great music. This is what dreams are made of! I mean being here, just us humans being together, drinking, relaxing... ...why can't this be love? Now, I have to go to the toilet, because I've got a fire in the hole and I need to go before there's an eruption. There's a poundcake or two, breaking through the seventh seal. No sir, I won't get fooled again. I can dance the night away with beautiful girls later. Dancing in the street. I'll be like a man on a mission and when the dream is over and Jamie's cryin, I'll be up for breakfast. Don't tell me I can't drink more. I say to this beer 'you're the one I want, because without you, I'm black and blue. So, is this love? I know I can't stop loving you. Once is not enough.
You're the one I want. Why don't you finish what you started and make me totally cabo wabo! Wow, this place is better than smoking in Panama... ...or Amsterdam!' Oh, this beer is gooooood! You can't get this stuff no more. I feel on top of the world!"

Well, I didn't actually say this to the barman, but if I did, it would have been really cool.
Another example of how my reality doesn't quite match up to the fantasy. Such is my life.

Okay, so they had loads of heavy metal records on display, high up on the wall and they had about 6 or so craft beers, including one real ale on pump (Minoh Stout), plus a few bottled beers.
Here's the beer list: 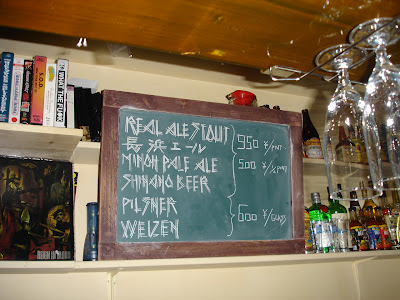 Here's another photo of the bar: 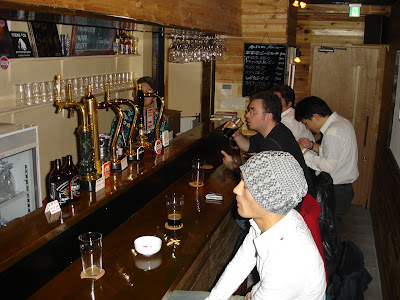 It really is a nice, cosy, freindly place.
I can see why most of the people I met that night were regular customers.
A good, knowledgable barman and a nice, smokefree atmosphere makes a recommended place to stop by, if you're ever in the Yokohama area.

In the above photo, you can see a 'gaijin' - a foreigner.
It's my friend, David. He also popped by to check out the bar.

Okay, time to talk about the beers.
I think they change them every month or so, but they have one or two constants, such as the Minoh Stout (not bad) and the Nagahama ale (very, very bitter and yeasty - and popular with the locals, suprisingly).

This time, the beers on tap were:
(click on the beer name to go to their website)
First up for me was the weissen: 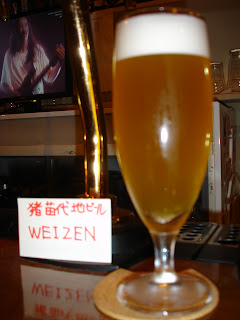 I didn't want to mix this flavor up with the ales and the stout, so I ordered it first.

It was not quite what I hoped for.

Taste had a hint of grapefruit (but not as strong as the Hidatakayama weissen, which I do not really care for).
Tasted a little off and not so flavorsome.

Aroma was not bad. Tasted a little watery. But had a reasonable creamy head. Retained the head for a while. 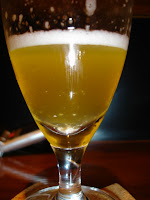 In the 2nd photo you can see the yeast at the bottom of the glass.

Next up was the regular beer, the Nagahama ale: 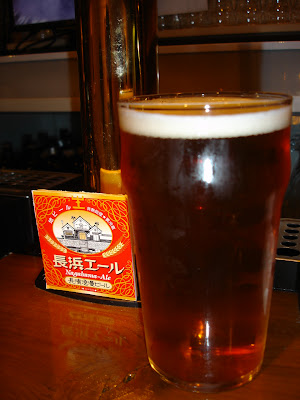 Boy, did this baby taste bitter!!! Also very yeasty.
If I had poured it from a bottle at home, I would have thought it had gone bad and thrown it away, such was the 'distinctive' taste.
However, I stuck with it and about 3/4 of the way through it, it began to be drinkable. 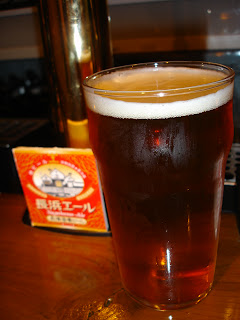 Still, I can't say I like it that much.

For me, I'd have to pass on this one.

My next and final beer was the Minoh Stout: 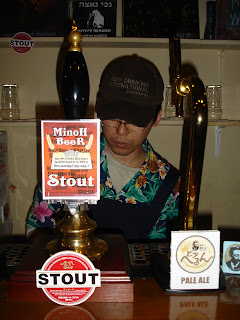 This baby was hand pumped by the barman.


This guy can pour a good pint (as could the guy who used to pour at Cheers - but sadly, I haven't seen him aorund for a while and I must say, the standard has fallen there because of that. Note: since writing this, there are new barstaff at Cheers and the standard of the pint has gone back up again. Cheers!).


Still, I was happy to wait for what I hoped would be a nice, creamy stout. 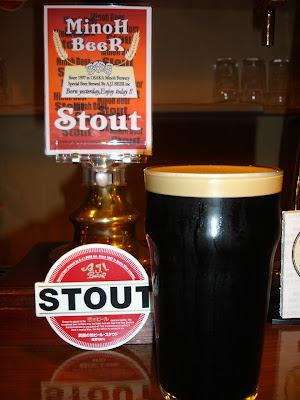 A nice pint.
The best of the night, for me.
Creamy and smooth and nicely rich so it needed slow drinking. Just the thing to end the evenig with.


All in all, a nice evening.

Here are a few more pics of the evening and some drunken rantings from yours truly (what, more?): 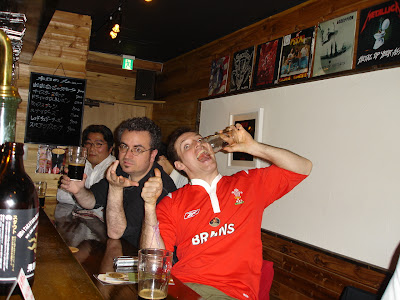 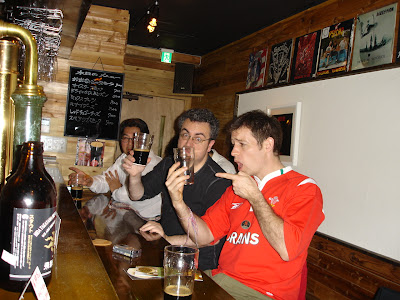 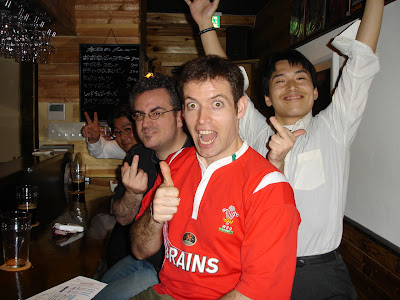