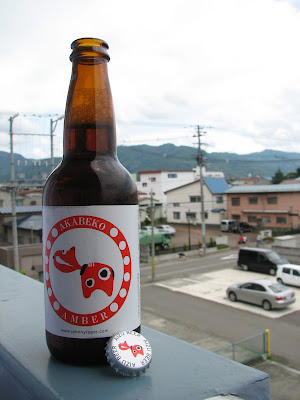 I was up there visiting some newish friends I made. They were all ALTs in Fukushima and one of them (Padraic) was having a bit of a birthday bash.
After a nice gentle night of 10 or so beers and terrible karaoke, we were to head to Aizu beer for about 3 hours of all you can drink. Not bad. Before that, we had a nice barbecue near a river somehwere in the middle of nowhere and no, I really don't think anyone heard me scream. Keeping one eye open for my beer and one eye for any amouruos bears and one eye on the hurly wurly thing that was flying around (Irish game - very dangerous hence very popular), I managed to survive and eventually found my way at Aizu beer restaurant (the more perceptive of you may have realised that I mentioned three eyes. The still more perceptive would know not to enquire further and could easily guess which 'eye' was watching out for the bears - if the 'twitchometer' was pointing due North, then I would know temptation was close at hand - grr). 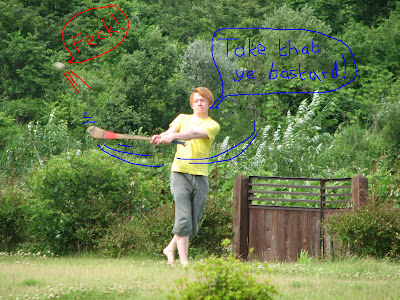 So, despite being slightly plastered from the BBQ, I managed to follow everyone and found myself here: 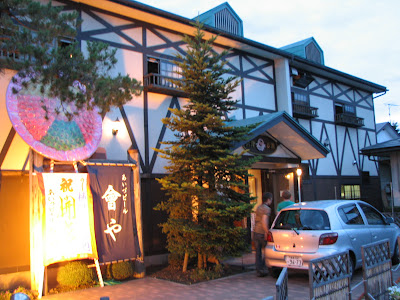 This is the Aizu Beer place. It's in Wakamatsu.
For the map, click here (in Japanese).

The inside of this place is quite nice. The actual bar/restaurant area is on the 2nd floor. 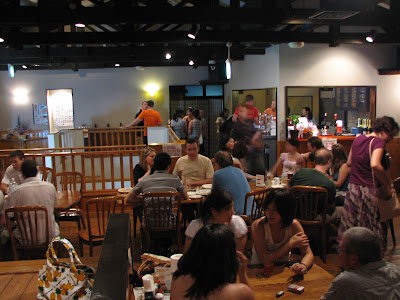 However, I don't understand the need for the huge central stairway. Seems to take up half the area of the whole 2nd floor.
But there is still plenty of space of 40 or so revellers (including a piano onstage).

Right.
Frist up, I decided to try the amber ale. This was poured for me by the owner, Mr.Johnny Lager.
You can see Mr.Lager in this shot. 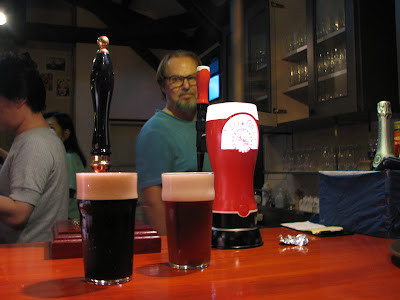 He just poured an AkaBeko amber ale and a stout. Nice guy. Happy to talk to you and also sat down and drank with us (didn't buy us a drink though). 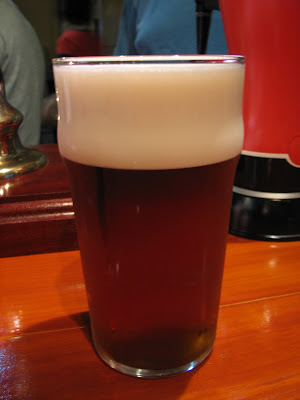 The amber ale was not an amber ale for me. But I was 79%paraletic by that time, so I could've been wrong.
Tasted like a normal-ish lager. All their beers had the similar (weird water/distinct strange hopping) flavor to them. Hard to describe.
Almost like with eyes closed you can taste a Baird beer or a Tama no Megumi.
These are like that. Also, like those beers, only a few are best suited to that particular 'taste'. These are similar in background taste to Tama no Megumi in that a pe ale or stout best fits the style.
The amber ale was ok but I wouldn't order another, unless there was nothing else to drink. 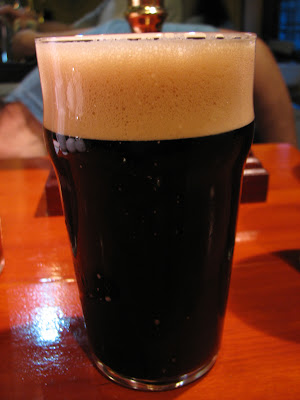 Mmm... very nice.
Suits the background taste and consistency just right.
Not a bad pint at all.
I could drink more of this and indeed I did.
Slight creaminess both in taste and body texture. A reasonable pint.

After that I decided to chance their experimental beer which was the kurogome, brewed using rice.
Im not a fan of rice in beer, but I decided to give it a shot: 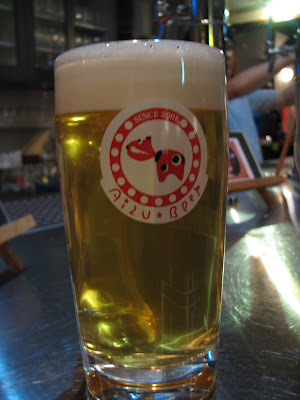 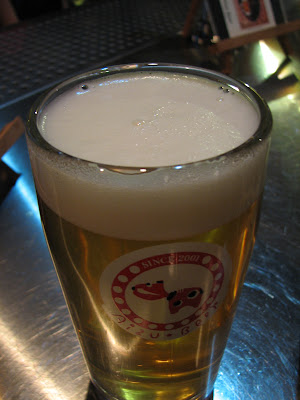 Very, very weird.
Wouldn't describe it as beer, as we know it, Jim. I tried but I just couldn't get used to it.
Think only certain peple will take to this. As for me, I had trouble finishing it.

As for me, nasty stuff. Sorry, Mr.Lager.
Your stout was much better.

Next I decided that I would try the other beers using smaller glassses, just in case I had a repeat of the kurogome to contend with.
The guys at the bar were very kind and allowed me to try a taste selection: 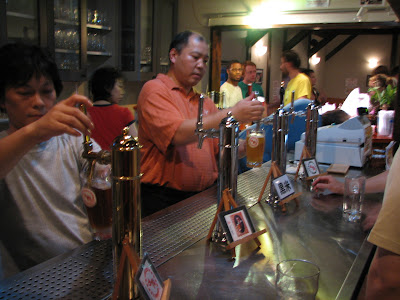 Here's a shot of the bar and some of the taps.
They had two hand pumps for the amber ale and the stout at the end, just past the register and to the left. 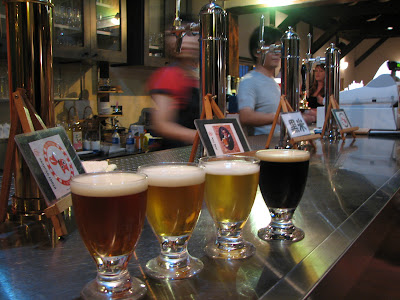 I had the amber ale, the beethoven, the kurogome(whoops) and the stout. 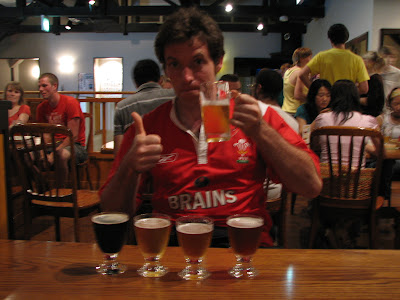 The amber ale was drinkable.
The beethoven was suprisingly drinkable (especially when compared to the other lagers - almost like the ugliest man or woman in the room actually seems quite attractive when on a trekking holiday with them in the mountains of Thailand, with only a bunch of retarded mongoloid (but still very nice in their own way) kids or some really 'big smack in the face with the whole ugly tree, not just the stick' ugly people - but when you come back to normality, you wonder what the f**k you were thinking at the time) . When surrounded by morons, even the village idiot would win the nobel prize (it's all relative).
Well, this beer, whilst not being a vilage idiot by any case, was still more or less surrounded by members of a disfunctional family.
There was younger brother kurogome, who after incessant bouts of self masturbation has gone half blind, lost functioning of his genitalia and can't be quite sure of who or what he is, only to semi resemble a member of his own species.
Then there is the older brother akabeko amber ale, who, because he's been to the big city, thinks he can imitate some viennese sophistication, but doesn't quite pull it off. Still, no one else back home knows that and he gains confidence from it, whilst a tthe same time knowing he can never leave home again.
Beethoven is the sister who has suprised everyone by blossoming suddenly into quite the 'members' of the family. Both of them. Looking quite plain and unassuming on first glance, once you get under the surface, you discover there are quite a few suprises. Tastes promising and soon you reliase there is more to this lady than you bargained for. Too late, the powerful inner strength of the 5.5% kicks you, right between the testicles of taste. There's no escape. you become the next in a long line of victims.

Then, there is the stout. The intelligent, smooth, charasmatic, well travelled uncle who can calm any situation. Can communicate in any language and any culture. The answer to all the families problems, he can stroll in and save the day, leaving nothing but comfortable satisfaction in his wake.

Here's a quick video of some drunken monkey, trying to sound sober and talk about beer. Not making much sense.


After talking to Mr.Lager, I realised there was yet another beer available for tasting!!!
He mentioned the doppelbock and warned me that it was deceptive in that the alcohol was quite high (about 8%).


I decided to give it a whirl and she was a beauty!!! 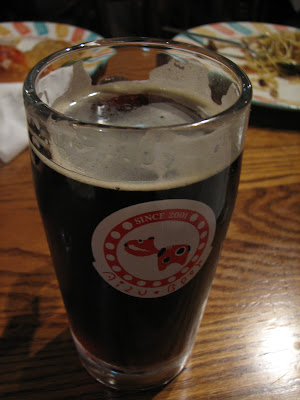 Yes, indeed she was a deceptive lady in a glass.
She's the kind of lady you would rush to hold the door open for, as she approched in her evening gown, only to then realise that she was on her way to her advanced kickboxing class, 15 flights of stairs further up.
She packs a punch, but you are so distracted by the taste, that you don't quite realise it until it's too late and you have lost control of your vital organs and are laying tits up in a ditch somewhere in Aizu Wakamatsu.
p.s. that didn't happen to me. I manged to get myself wedged, in a presumably tits up position, on my friends minature sofa. What little sleep I had was interrupted by 'hmm hmmm!' - other things.

Dopple bock : 6/10
_______________________
Overall verdict for Aizu beer: 6/10.
I liked the place.
Don't mean to be overly critical of the beers.
I really appreciate the stout and the doppelbock. Lovely.
Also the beethoven wasnt bad. But therer's still that similar aftertaste that really nags at me.
Baird has it but that's kinda due to the hopping (some people either like it or hate it). Tama no megumi has it and I think it ruins some of thier beers (but a the smae time compliments their ale and stout). Aizu kinda has it too.
Brought a couple of beethovens and stouts back and my friends said the same thing. Weird taste to the beethoven, like something was amiss. Stout was liked by all.
Nice atmosphere (partly supplied by the great Fukushima ALTs - thanks, guys!). 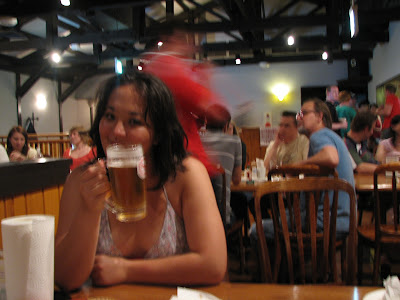 Nice food and reasonably priced.
Nice location.
Good interior (but why that huge staircase?).
Nice owner who is happy to sit down and talk with you over a pint. Good selection. Even though I don't like some of the beers, I still appreciate a selection of more than just an ale, stout and weissen.
Not worth a special trip out there from say, Tokyo, but if your in the area, why not pop by?

Im glad I did.

Note: Unfortunately, Aizu Beer is no more and Jonny Lager has finally quit the business. I think it's a pity. I liked what he was doing and liked some of his beers and respected the ones that I didn't as a brave attempt at making original and interesting booze. His location in the mountains of Fukusnima's Super Dry country wasn't the best place for a thriving business but I think he did a good job with his pub. It will be missed.
Aizu Beer is dead. Long live Aizu beer.
you can still drink some of that is left at the Aldgate, in Shibuya. Just ask if they still have it (renamed) on tap. Could be the last to have a little bit of beer history.