Yesterday (Wednesday), I popped out to Tokyo to check out some interesting bars.

But first, some hats: 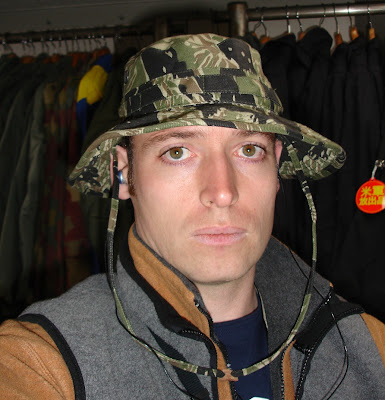 I found this awesome army surplus store and couldn't resist trying some hats on! 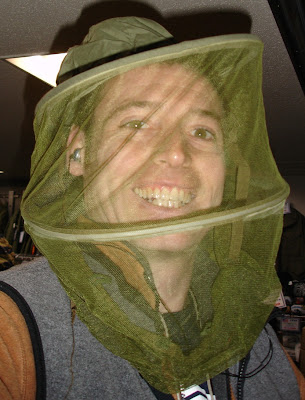 First on my list was The Warrior Celt, in Ueno.

(click on their logo to go to their site)
The pub is up on the 3rd floor. Can you see the sign? 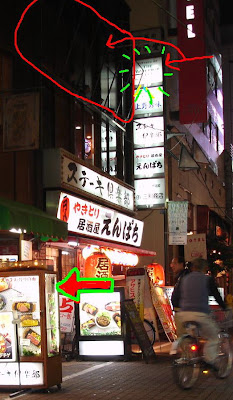 Wasn't so easy to find. Here's the map from their website:

They have a great happy hour offer:

What's on offer?
When I was there, it included Spitfire, 1698, Guinness, Heineken and Old Rosie (cider).
I only had one hour of happy hour left so I decided to make the most of it.
Unfortunately, as I was concentrating on drinking, I forgot to take a photo of the bar.
Here's one taken from the Warrior Celt fan blog: 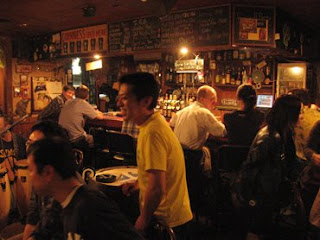 Click on their picture to go to the site.

I started with a Shepherd Neame 1698.
For more info on this beer, click here.

I thought this beer was the best of the bunch. 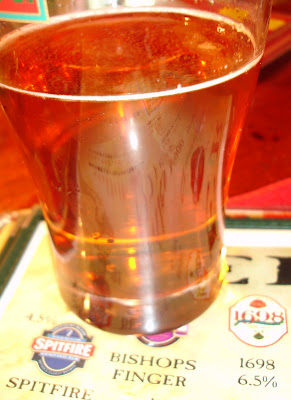 Next up was a Bishop's Finger. A suitable ambiguosly saucy title for a spicy, saucy pint.
I had this from the bottle: 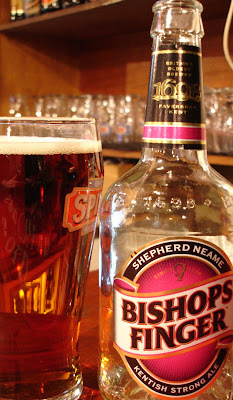 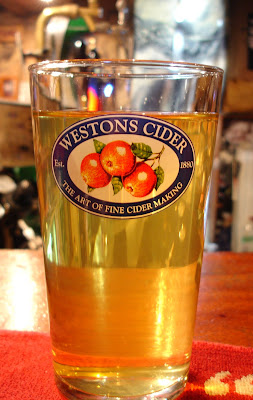 Hmm... ...try saying 'golden delicious', without saying 'golden' and 'delicious'!
lovely.
This brought back memories. Senior high school, first year. We sneaked in a 6 pack of scrumpy cider during English class. Drunk them under the desk. That was a good lesson, as I recall.
This stuff was kept in the refridgereator, as the bar was too warm for the cider to keep. It was served at a nice cool temperature and tasted crisp, clear and cool. Not so strong tasting. Just the right amount of sweetness and tartness. Very nice. A little flat though. However, the real old ciders were more ro less gasless. I've been drinking too much of the 'artificial' stuff. Strongbow and Woodpecker etc have CO2 added to them. Thanks for that reminder, Andy!

After that, I ordered some food: 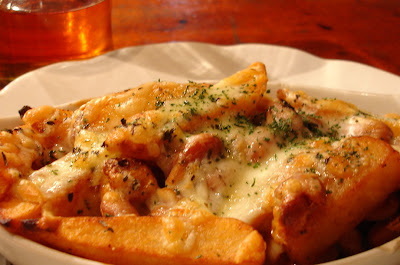 Chips & Chili Beans. At 600yen, this price matched the drinks.
It wasn't so bad, but how this took over 20 minutes to cook, I have no idea. I think some work has gone into preparing this, but it didn't taste all that fantastic. Not really spicy at all. but it had chips, chilli beans and cheese. So it went down easy and was appreciated (even though perhaps it doesn't sound like it).

I had jsut enough time for one more pint, so I risked a flat 1698.
As i mentioned previous, my logic was that at least if it was flat, then it would seem an authentic beer from 1698.
If so, then I'm glad I'm in the 21st Century.

p.s. a small warning: You can order snakebite here! This stuff is more or less illegal back home, as people get very, very drunk on it and very very fast.

Another drink which was lethal was the snakebite and black. This used blackcurrant cordial and was even sweeter tasting. Danger!
So, if you're with that extra hot date or you want to persuade your boss to give you that well deserved raise, then get them on this stuff!

I liked the Warrior Clet and every time I go there, it's a little different.
Warrior Celt 6/10
p.s. their happy hour now doesn't include bottles but it's still pretty good if that includes beers like 1698 and old Rosie.
Well worth a visit if you're in the Ueno area. May even be worht swining by from somewhere else, especially if you go during happy hour.
p.p.s their live music is pretty good, too.
_____________________

Next up was a huge burger from Mosburger 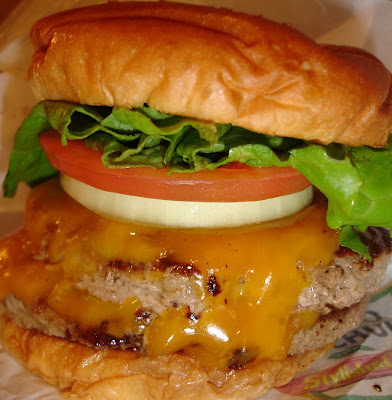 ...and then a stroll thorough Ueno park to see the cherry blossoms and all the salarymen and women partying away under the lamplit blossoms. 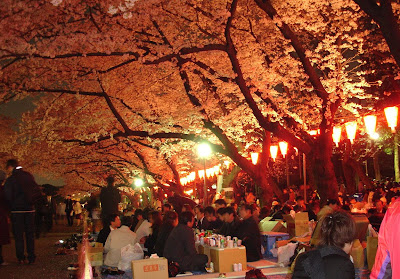 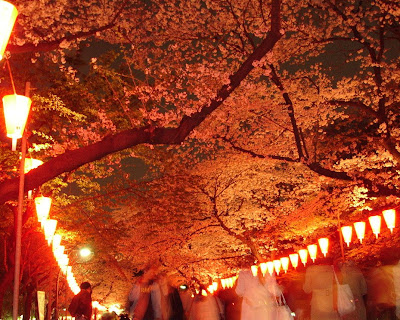 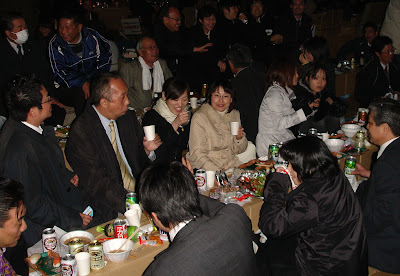 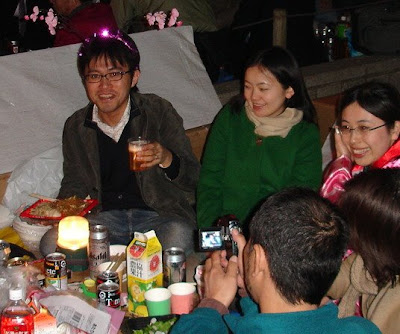 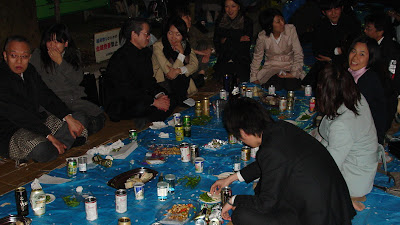 Toilets were busy. At least they were using them. 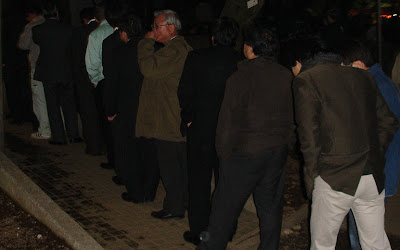 Seemed like some people had been here all day. 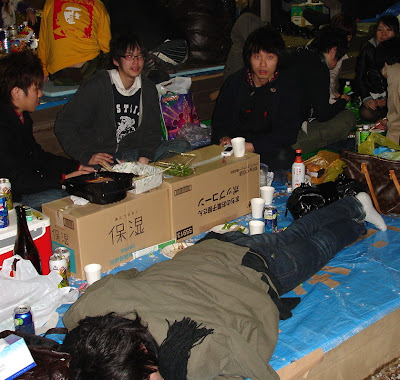 This guy was on his own in the centre of a big blue plastic area. But some other people were trying to fold up the plastic. It was funny watching it. 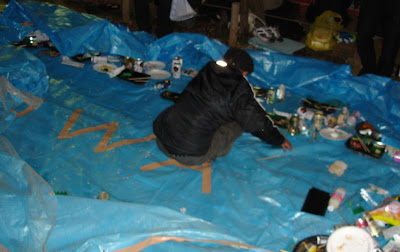 Perhaps he's still in there... 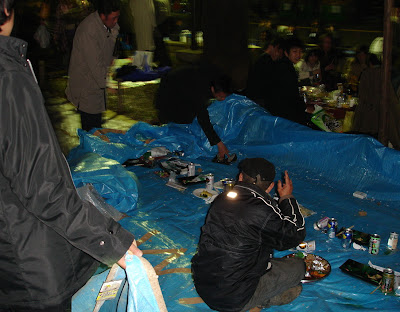 Off I went to Tokyo station, in search of BarBar. 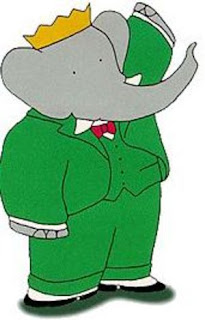 No, not a big talking Elephant.
A beer bar, deep in the bowels of Tokyo Station. 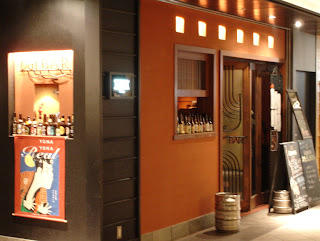 Again, it took me a while to find it (I'm useless with directions - perhasp it's the beer).
Once inside, I find it's small wiht a crazy 's' shaped table dominating the cetnre. If you don't mind a stinky breathed smoking salaryman inches from your beer and your face, then I guess this is the place for you. I got a glass of the hous Augus(t) pilsner, from Fukushima. 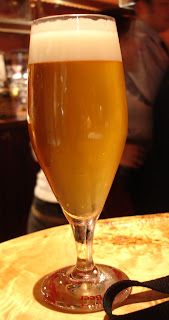 This tasted more like a helles? Malty, creamy and not so good. Couldn't get much info on this beer from the staff.
Augus pils -4/10

After some salarymen started blowing smoke over me and my drink, I drank up and left. Now I know why I didn't drink in there the last time I checked the place out, a long time ago.
On a side note, the nearby ShoChu Authority alchohol shop now only sells shochu and awamori. They used to have a small but really interesting selection of Japanese craft beers. Not any more.
BarBar - 4/10.
________________________
Next up was the Beer Bar Bachus.
Just a few blocks away, to the North East of Tokyo station, it must have taken me over a bloody hour to find the place! 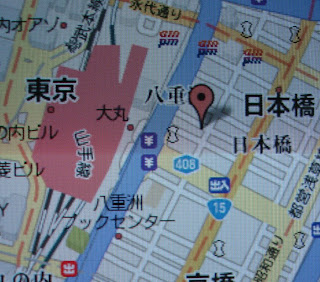 Even the Asian "massaji? massaaaaji!" ladies didn't kow where teh bar was (and this was when I was barely 20m away from the place!).
I almost ran past it: 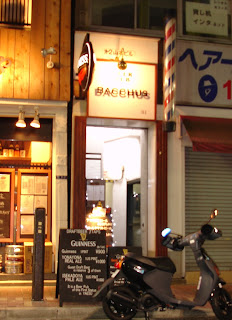 Easy to walk past. It's only been open about 5 months. The owner used to work in an 'Irish' bar out near Nippori, if I've got my info correct.

The bar is in the basement. When you go down you'll find a nice cosy bar with space for around 15 or so. The main bar is at the end of the square shaped room. A nice bar it is too. Comfy stools and half a dozen or so taps. 2 hand pumps. I like this place. 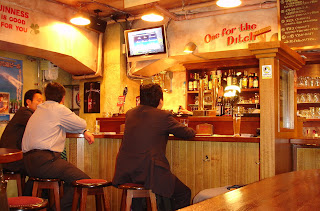 The menu for the day: 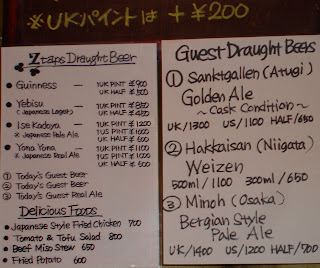 I ordered a half pint of Hakkeisan weissen.

I've drank this before from the bottle and it wasn't too bad. Hakkeisan is also a sake brewer from Niigata. I used to drink their sake a bit when I first came to Japan. Liked it.
The weissen is a little weak and watery tasting. But not too bad.
Hakkeisan weissen - 5.5/10.

Next up was the cask ale. This was a Sangkt Gallen Golden Ale. Did I spell that right? 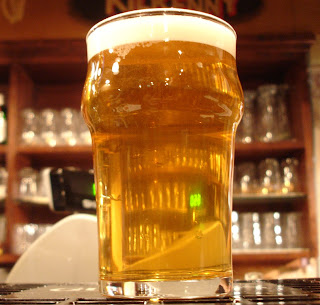 Not bad. bit weird tasting. Kinda changed as I drank it, rather like the golden ale I had at Aldgate (Was it Miyabi ale?). Little bitter and tinge of apples? Never been a big fan of Sankt Gallen. This isnt too bad. Still, not my favourite but I was glad I tried it.
Sankt Gallen Golden Ale- 5/10.

Bachus is a nice littel place. If you're in Tokyo and even if you're at the enarby Towers, I reccoment paying this place a visit.
Something I really like about this place is the fact that the owner displays the price for a US pint or a UK pint glass. Most people don't bother to do that. It DOES make a difference.
Beer Bar Bachus - 6.5/10.
____________________

Next up, with simple, easy to follow directions from the Bachus owner, I made my way (sprinted, more like it, as it was 10 mins to closing time!) to Towers.

A very nice, small standing bar. The owner used to be a teacher and now runs this bar. Great guy. Loves his beer and only serves the good stuff. He was also kind enough to allow me to enter after he put up the closed sign. I only had 10minutes to closing time, so I concentrated on drinking, rather than taking photos.
I should've taken one or two from outside, but I'll do that another time. For a nice shot of the outside, why not check out the excellent Brews News page. They cover almost all bars in Tokyo and the surrounding areas and include reviews and directions, etc. A handy, great website.

Here's a photo I did take of the inside: 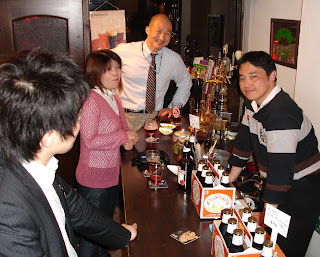 Everyone was really friendly. A great little bar.
Right, the booze.
First up was half an Ozenoyukidoke barley wine. 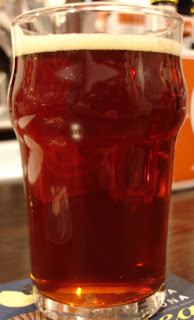 And very nice she was, too.
Ozenoyukidoke barleywine -6/10.

Next was a Baird red rose amber ale (I think?): 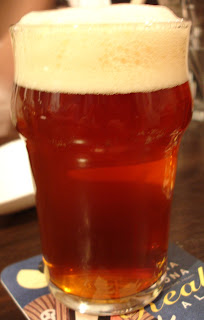 Then, I rushed to the station and just made my last train home!
Can't type much more now. My knuckle is hurting so much (broke the thing, punching a bar stool, 2 weeks ago when Wales won the rugby grand slam).