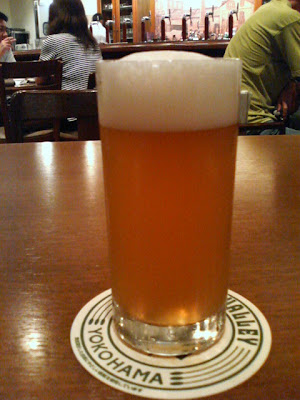 Looks good. Great head. Nice smell, but metallic taste.
The service was terrible.
They had at least 4 people working there.
I ordered my beer within 2 seconds of seeing the choice and waited more than 5 minutes for the waiter to bring me my beer.The barman was not busy. Ridiculous. Plus, I'm pretty sure he started pouring my drink then stopped and maybe changed a barrel then a long time later just topped the glass up. That's not the way to pour a beer. I had to order a second beer to take away the nasty tinny taste from the first one.
I watched the barman. He did the same again! WTF?
I tried to tell the waiter but he had no idea what I was on about.
I thought I used Japanese and English simple enough for a 2 year old but I forget that 2 year olds have open minds whereas adults do not. I gave up and sent him back to the smiling barman and manager. Idiots. I couldn't finish my weissen, because it was so metallic. They are lucky my Japanese is atrocious, o rI would have given them a piece of my mind and explained to them how to pour a beer. Idiots. Plus its always too damn cold. Rant,rant, rant.
It took me an hour to eventually find the place so I expected nice beer. Phooey! So there.