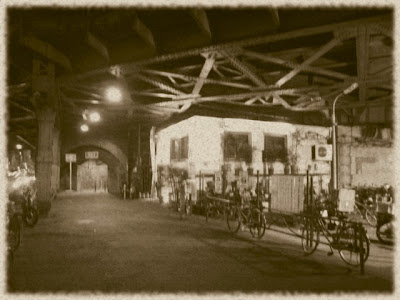 Getting wet, down at the Dry Dock.

I heard that there was a bar in Shinbashi, Tokyo, where I could have three Asahi Super Dry beers and each one would taste different.
How?
Would each one be worse than the previous?
Not liking this beer very much, I could see how that would be possible, simply through enduring the bloody stuff and also with the knowledge that I am actually paying for each beer as it arrives.
Another friend has a theory that the barman goes out the back and spits in one beer, urinates in the other and serves the other beer normal.
I wouldn't be suprised, that if that was indeed the case, then in a blind test, the unaltered beer would come out bottom.
So, you see, I am prejudiced against Super Dry and other such skimpy beer wannabees. I don't really want corn or rice products in my beer. I am a snob. Of this class of beer wannabees, I regard Kirin Ichibanshibori as the most drinkable.
I have met many, many Japanese men (no, not in that sense) and sometimes women (why do you seem suprised?) who claim to be a 'super dry' or 'Kirin lager' person. I'm sure there are even one or two out there who are ardent 'Magnum Dry' officionados, but I have yet to find one. Until then, they shall secretly keep on getting the wife to buy the stuff by the case from the discount supermarkets and drink it at home, in their underwear, whilst watching the baseball and playing with their nuts.
It's not what I do myself, of course. I don't like Japanese baseball that much.

Anyhoo, I really wanted to give this claim a go, in the name of science, you understand. Testing out the theory, as it were.
However, it simple wasn't to be. Not this time, anyway. I had very little time before my last train home, so I could only have the one drink.

I will go into that soon.
Firstly. let me just throw it this out there:

Have you tried the three super dry challenge?
What did you think?
So, the Dry dock is a small bar set under the train tracks, near Shinbashi Station, in Tokyo.
It's not all that easy to find. The map is pretty good, but the bar itself is a little out of the way. It's in a part of the station that doesn't really see that many people.
Here's the map (I took this from their website and do not claim it as my own): 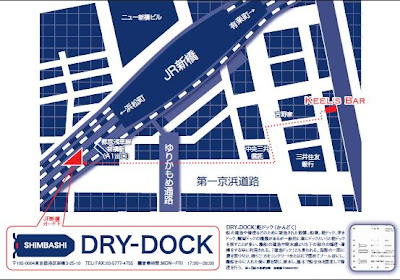 Opening times
Weekdays: 5pm - 12:30am
Fridays and National Holidays: 5pm - 2am
Saturdays: 5pm - 10pm
As you come to it, you will see a small, white 2 story building, seemingly standing alone, under the tracks. 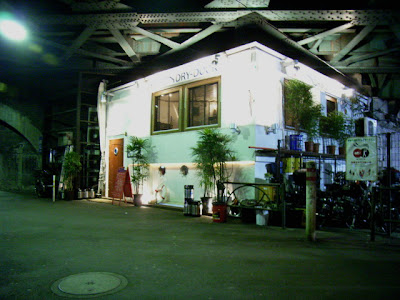 When you look again, you may notice that the first floor is 'half submerged', adding to the whole 'dry dock' image, perhaps. The solid looking main door is constructed out of wood and has a nautical circular hatch set into it. Very nautical. Although not as nautical as Nautical Nancy, renowned for her insatiable desire to consume seamen. Not to say that there's a ship in every port, but her port's seen more ships than Yokosuka Naval Base. Yes, I just went there - not to Nautical Nancy, but I shamedly just lowered the standards (another nautical pun). If there is a 'Nautical Nancy' out there, I apologise (and my home number is 01234567).
As I descend the steps into the main bar, I can see a small staircase leading up to the right. This leads to an even smaller second floor with seated tables for about half a dozen or so. The main bar area features a long standing bar with space also for around half a dozen. 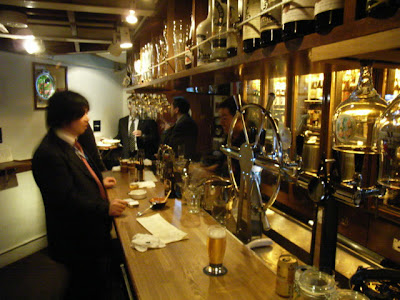 Resisiting the urge to hoist my jolly roger, I checked out the menu:

I noticed that they had a new beer, as yet unreleased by Asahi. The kind and very knowledgable Sato san informed me that this beer was due for release in March. I decided that if I didn't have time for the '3 super dry challenge', then I could at least try a new beer. 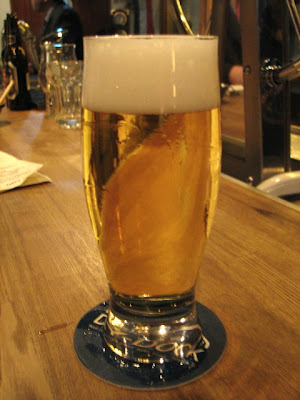 Asahi Premium: 5.5/10.
It wasn't at all bad, though it didn't exactly rouse the seamen into action. Malty taste. not very bitter. Slightly, slightly sharp. Just a normal Japanese lager, I felt. The big 4 companies have been churning out a lot of 'premium' all malt beers the past year or two. Maybe in an effort to encourage the premium beer (and premium prices) market. The Japanese public don't seem to have swallowed that bait, as it were. It's a bit silly, really, by the beer companies, as it was they who got the public hooked on the cheap booze to begin with. Now they seem suprised that average Joe or Taro doesn't really want to pay all that extra for a beer that doesn't quite taste as astringent and acidic as the stuff that he's grown accustomed to and has begun to love. Not to mention he feels loyal to his brand and has begun to identify himsefl with it. I'm waffling on again, aren't I?

Anyway, this beer isn't bad, but it's nowhere near my favourite. I like a malty tasting beer or a good, heavy bodied porter. Not aversed to a fruity American style pale ale, either.

Right now, I'm relaxing with a nice, big, strong, full bodied black porter.
His name is Alan and he's a scorpio.
I also have a couple of bold and fruity Americans in my home, just waiting to be swallowed. I think we're gonna have a party tonight.

As for the Dry Dock, the atmosphere is very good. Very friendly and I have the feeling that the owner really knows his beer and for some reason, really likes Asahi Super Dry. I can accept that. I want to return to this nice haven for stray ships soon and take the time to truly dock here and take up the '3 super dry challenge'.
The Dry Dock - 6/10
(A friendly and interesting place. Don't forget to try 3 Super Drys
- and don't blame me if they all taste the same)
___________________