The Grafton- Irish bar(?) in Gotanda

After getting lost many times in Kawasaki, I came home at about 11pm. Had a shower and got changed and I headed back out to check out an Irish bar called The Grafton, in Gotanda. 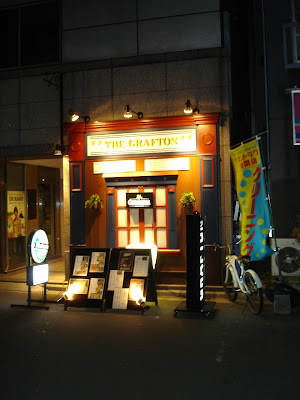 I got to the bar at about 11:40pm.
I went to the basement bar and discovered it to be completely full. No problem, as I don't have any friends.
I found a small area standing around an upturned barrel near the centre of the bar and joined three Sony engineers for a drink.
They were nice guys and didn't mind me taking a shot of my pint: 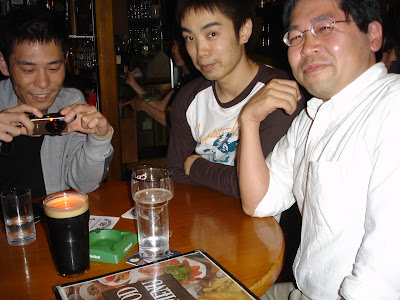 They even took one themselves (but the guy is using a Canon camera! - I used my Sony!).
The beer selection here is not bad.
I had a Swan Lake porter. It was nicely poured, but, as with most bars in Japan, it was just too damn cold. I had to drink slowly and try to warm the beer with my hands.
It got better eventually.
They had the standard Guinness and Kilkenny plus Tokoy black and the other Yonayona pale ale, lowenbrau and leffe on tap. They also had a nice selection of bottles. Not a bad place. Cosy.
Here's another shot of the inside: 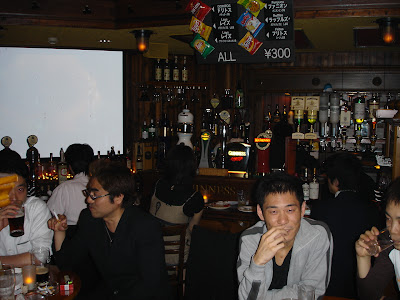