Ratebeer does the Fujinator (almost)

I woke up on sunday morning and just wanted to die. 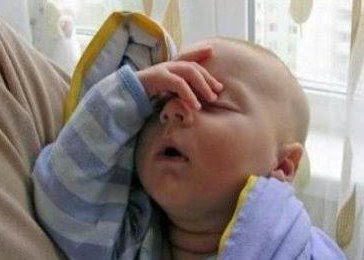 Sat night was a bit wild, beer wise.
I don't want to know how much I must have spent that night.
The beers were 700 a pint so not too bad a price, considering this is Tokyo (some other bars ask for 950 for a half pint!). I was well into double figures. Having a hangover to start with was not such a good start, either. This hangover had it's own hangover, come Sunday morning.

I recieved a call from Tim E, seeing where I was. Apparently, everyone was supposed to meet up in Shibuya at 9am to take the mini van to Gotenba. It was 9:09 when Tim called me.
I was still semi concious when I said I would take the train and meet them at Gotenba.
The plan for those guys was to go to Wind Valley first and try their beers, then head over to Gotenba Kogen beer, then go on to Fujisakura and Bayernmeister.
That was the plan, anyway.

I somehow managed to drag myself onto the trains and was only sick the once, during the long, long journey to Gotenba.

The weather was outstanding but my mood wasn't very appreciative. I just wanted those damned birds to just shut the h*ll up and everyone to stop smiling at me. Didn't they know I was hurting? 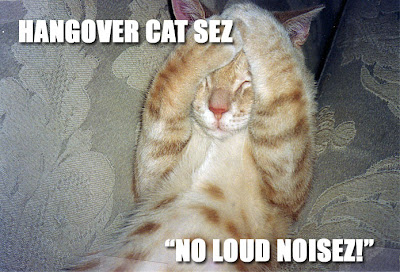 But the time I got to Gotenba, I was feeling a little better. My head was still thumping, my stomach was feeling queasy, but at least I could stand up straight and walk at more or less a normal pace.

I got to Gotenba kogen beer and the guys were already there, inside the main eating banquet hall. . I met Scott outside and we both pondered the hypothetical idea that I could try the old sneaky maneouvre of just walking thru into the main hall without paying (seeing as I didn't really want to drink - or was physically capable of drinking more than half a pint of lemonade at the time).

I allegedly gave it a shot and walked into the place with the confidence of someone who thinks that any moment he's gonna get caught. 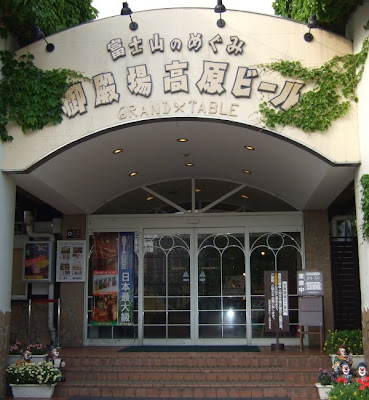 It worked.
Hah! There's two fingers up to the man! 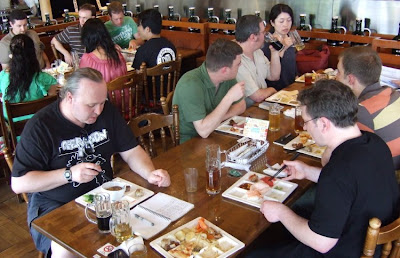 I wasn't feling so good, but as time went on, I got to feeling a little better.
I decided to try just a tiny bit of food. 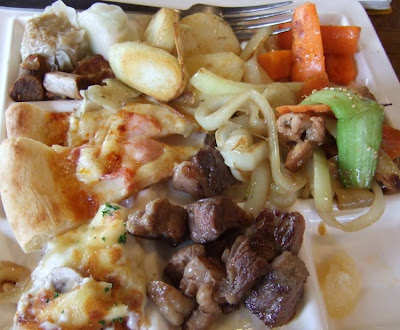 Three or four plates later, I was feeling a little better. I even managed a little beer.

Those beer machines are interesting. Fully automated. You just grab a chilled glass, stick it under the machine, press a button and wait.
The machine brings a nozzle down into your glass and slowly fills it up until just before the top, it adds a nice head of foam.

Here's a short video I took from a few years back, introducing the various beers they had on tap at the time:


The brewer was an American Called Scott Brimmer. He is a great guy who is very kind and also very modest. He used to brew at Sierra Nevada, one of the oldest and most famous breweries in the US. Real quality stuff. He is now working at Gotenba Kogen and pumping out some now even more improved beers, of which possibly the pilsner was the most solid of the bunch. The amber was the seasonal when we got there.
It was ok, just an average amber, perhaps. Nothing very special but also not bad. I don't really go for amber ales but I could drink this one. Like I said, their pilsner was good. The schwarz, too. The weissen was nice but not as good as I know it can be. The weissen bock wasn't too bad. Just a tad astringent but very drinkable.
All in all, the 3000 yen or so for 80 minutes all you can drink and eat is a pretty good deal.
Believe me, when you pig out for 80 minutes, you don't really need much more time as by then even the biggest boozer will feel bloated. If you still want to continue drinking, you can always go for another 80 mins or drink in one of the other beer restaurants downstairs or buy some bottels or cans at the gift shops. You can even drink draft outside, from one of the special stalls they have set up.
Like I said, Scott is agreat guy and he showed the RateBeer guys round the brewery.
Gotenba Kogen is possibly the biggest microbrewery in Japan. It can put out a LOT of beer.
Here's a pic or two of Scott, showing us round: 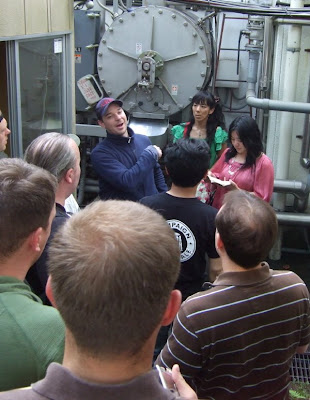 In the malt storage shed. Telling us stories of the good old days. 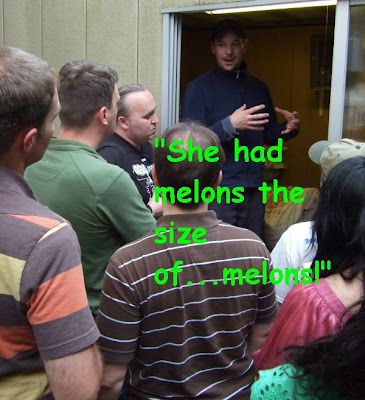 Here's the man himself, standing next to the boiler (the same one I shoved my face in - without losing my eyebrows! A certain someone was supposed to take my photo but was probably laughing so much that he forgot. I didn't shove my face in there a second time.). 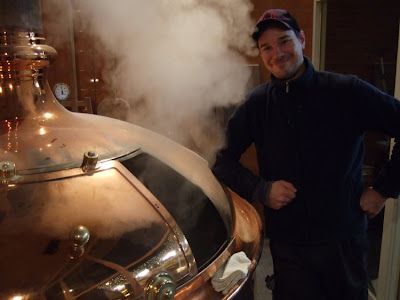 Here are some of the gang, posing next to the tanks: 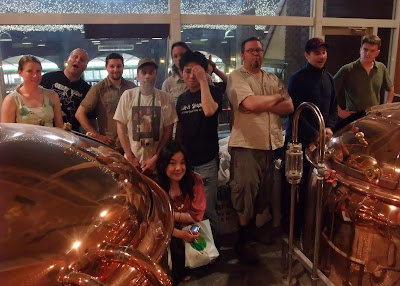 A great bunch of people.
It was getting on, so we headed off, up into the mountains. Well, one mountain. A big mountain. The biggest mountain. Mt.Fuji. We didn't so much go up it, as more traversed the flanks. Still, it was quite a climb (I should know, I've cycled it about half a dozen times). 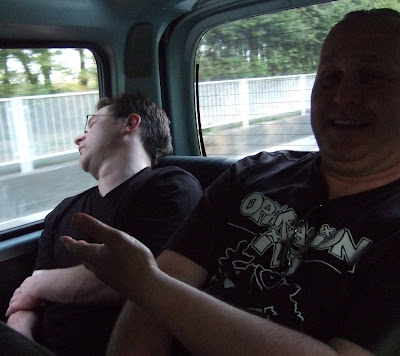 The route takes you past Fujiyama beer, but don't worry about stopping there (unless you'd like to visit the excellent radar dome museum - the radar dome and various instruments from the now unmanned weather station have been moved to here and the museum does a great job in telling the story of Fuji San and the history of the manned weather centre at the highest place in Japan, 3,775m.) as the beer is 'off'.
Nasty stuff, it is.

Just keep on the 138 from Gotenba and turn off on the 701. Then a few km up into the forest, turn right then a little further on, right again and you come to Fujisakura beer's Sylvan's brewery and restaurant (also Doggie park , which is next door).

We arrived eventually, tired and still a little hungover from the night before. 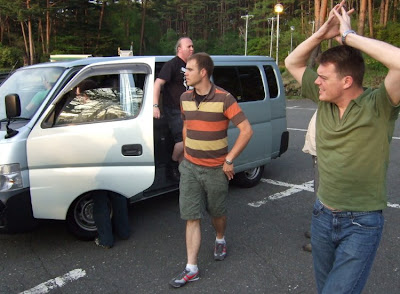 Unfortunately, they had just closed the excellent beer garden to the public. However, we were allowed to take bottles outside and sit down in the corner, amogst the flowers. 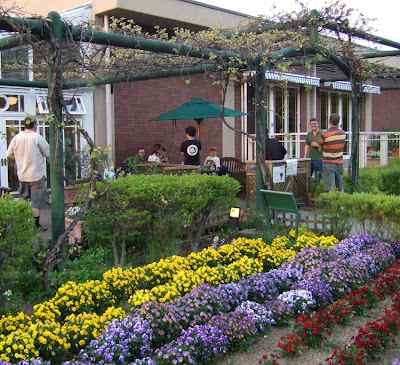 Fujisakura has been around for a few years now and puts out some outstanding German style beers. They have had probably the best weissen in Japan for some time now (recently breweries like Kure and Becken of Hiroshima and possibly Baeren of Iwate have stepped up and provided a challenge). GBCBoys - if you get the chance, seriously, check this place out. Especially if you like a nice fruity hefeweissen. 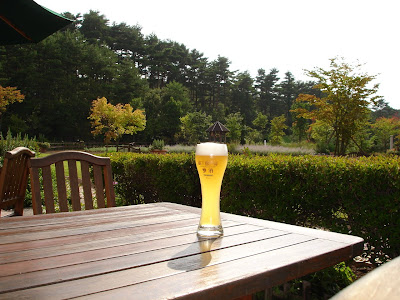 This is a pic of their weissen that I took in their beautiful gardens, one summer.

They also have a lovely rauch, or smoked beer. I'd even go so far as to say that at the moment, it's my favourite Fujisakura beer. 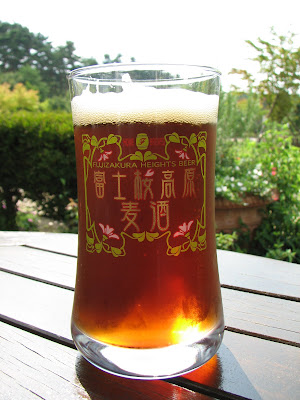 They also do a pils as the thrid of their 3 standard, year round beers. The pils isn't bad, but I think Gotenba pils is better. The Gotenba is drier and more quenching. 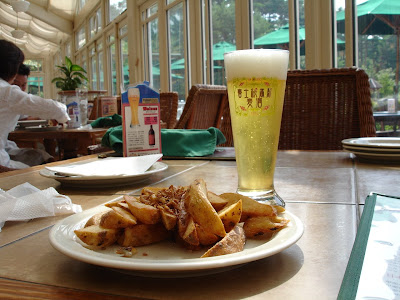 They bring out a few seasonals a year. The one out now is a marzen, which isn't bad but not as good as their Sakura bock, which finished recently. Their rauch bock is alos a favourite among beer fans. TBe beer Advocate guys managed to get a sneak pitcher of the rauch bock and the new marzen and voted the rauch bock as their favourite beer of Fujisakura that ngiht.
Personally, I went with the rauch. The weissen is very good but even the brewer admitted that it wasn't in perfect form at the time (the yeast was a little weak and needed to be strengthened, to bring out the best taste). 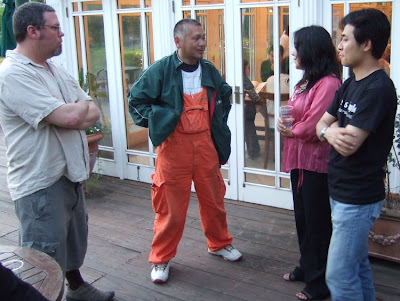 He really is a great guy. Always happy and cheerful. He is very popular amongst the craft beer guys and girls. Great guy, producing great beer. If you see him, say hi and tell him how good his beer is. He is always happy to hear that!
Also, if you get the chance to visit Sylvan's, please say hit to the staff (especially Watanabe san - teh young floor manager who can speak English) from Chris!

As our group was somewhat special and contained beer officionados from across the globe, Mitiyashita san brought out some special treats for us. He treated us all to some pitchers of the yet to be released marzen and his rauch bock. What a great guy! 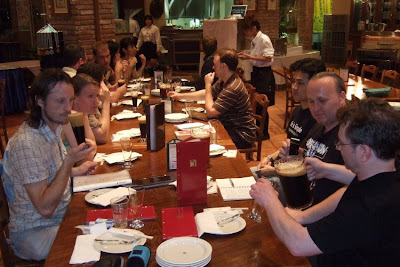 Here are the guys, tucking in to some fine beer.

Of the many beer gurus I met, I probably talked to Gazza the most.
This guy is amazing. He's tasted and recorded notes on well over 19,000beers.
Wow.
AND he is still alive!
He is also very friendly, approachable and happy to give information on beers to drink and places to go, etc. As in fact everyone was. An outstanding bunch of people. 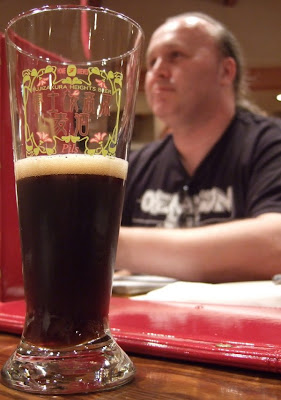 Here's Gazza, with possibly his favourite beer of the evening - the rauch bock.

Here is also a sneak preview of the new Fujisakura beer glass: 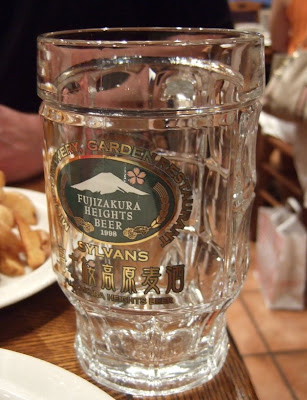 It's a 500ml monster that will be used for the marzen and pilsner that will be sold in the upcoming Hibiya ktoberfest from May 22nd. A nice looking, solid glass. I think it's modelled after the Lowenbrau mug I have in my home, but larger and heavier and so this has added beer 'GRRR!' power to it!

Gazza and his friend (I'm really, really sorry, but I am really useless with names but I am good with faces! We had a few laughs.) were good to talk to but unfortunately for them, they were sat next to me almost every evening. Sorry, guys!
At the end of the evening, his friend decided to show us how to pour a pint: 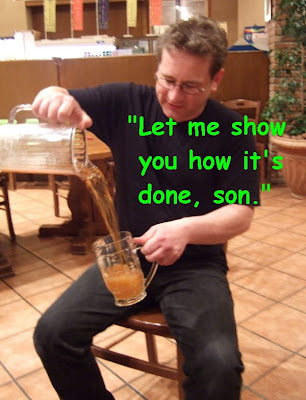 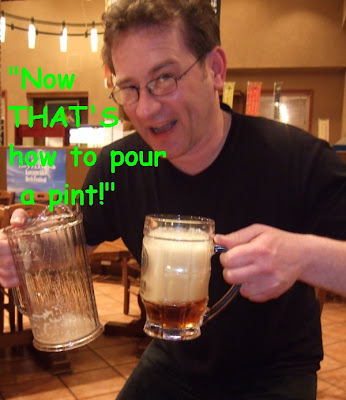 That was fantastic!
We all managed to get together one more time, in the car park outside of Sylvan's (which happened to have the best view of Fuji San!), for a group photo.
Here are two I took. One is a bit dark: 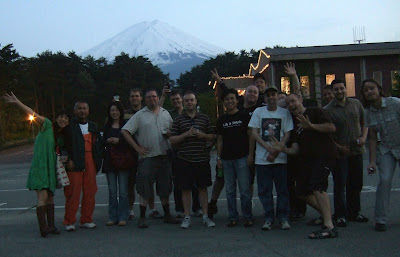 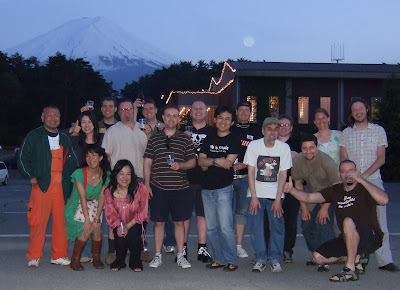 We got back to Shibuya later that night.
The other guys in the van had some great beer to taste on the way home, courtesy of KyotoLefty.
I heard it was bloody good.

Never mind. I consider myself fortunate just to be part of a historic meet up.

Big thanks to Tim E for organising it all.

The guys met in Popeyes the next day. A good place to taste more of what Japan has to offer.

The first RateBeer Japan Gathering was good fun.
I hope there will be many more.