The Full Monty and the Carvery that'll make you go 'BOOM!'

One Sunday, I ventured down Yokohama way to Kannai and the British pub, The Full Monty, for their Sunday carvery.
Some may know this from it's original location in Higashi Kanagawa.
Well, it's not there anymore.
It's now in Kannai, next to the Yokohama Bay Stars Stadium and close to the station.
It's across the road from the YMCA.
Easy to find. 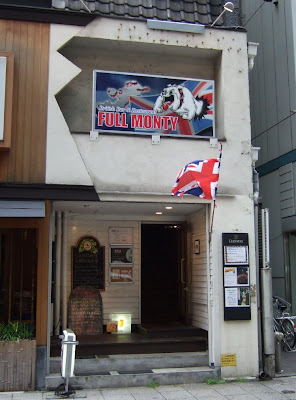 Once inside, you'll be greeted by a big, scary Englishman.
Just kidding.
He's one of the nicest and freindliest bar managers you'll be likely to meet in this fair land.
Here he is, with some of his gangland friends. 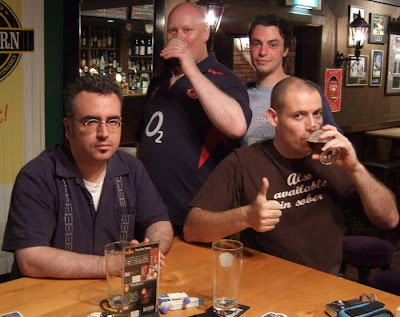 The place itself is quite large and I reckon they can get a fair few people in there. They are sometimes busy but not this lazy Sunday (which suited me just fine).
Here's a view from the back rear corner of the pub, near the toilets (make a note of where they are, as if you go for the carvery, you're gonna need them later - not because the food is that bad, rather that it is that good!): 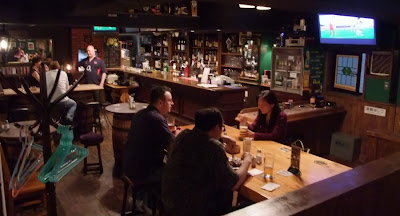 ...and from front back corner: 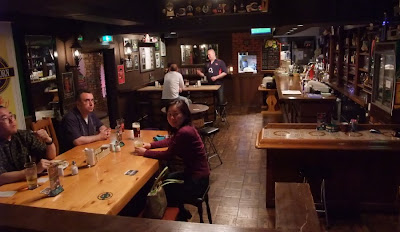 You can see the bar on the right. Here's a view from the front left of the pub. He has a great solid looking bar where he has about 10 beers on tap, including one rotating guest tap and an occasional Japanese craft beer (it was Baird last time round). 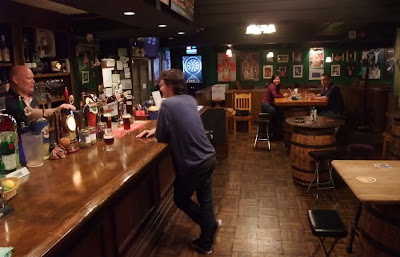 Frist thing first, I needed a pint. Clive recommended the Wychwood Hobgoblin dark ale to me.
Now, I know this beer and wasn't too impressed with it the last time round (at the Hobgoblin in Shibuya) but I decided to give it a go. 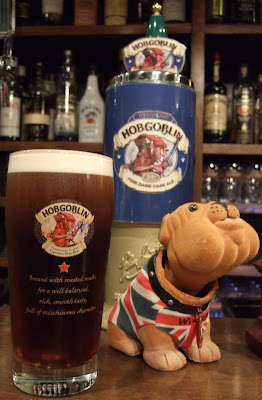 It was good.
And the carvery?
Clive is a great guy and will guide you through the carvery system.
It's really very simple. Eat as much as you like for 1500yen.
It's on offer from 2-6pm, so that's four full hours of all you can eat.
Can't argue with that, can you?
On the menu are beef and lamb and plenty of it.
Well, you could say, it overflowed with flavour! 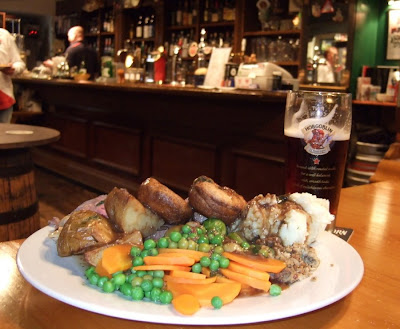 This was my first plate. His wife is the cook and she does a great job.
Needless to say, I went back for more. My second plate ended up the same size as my first! 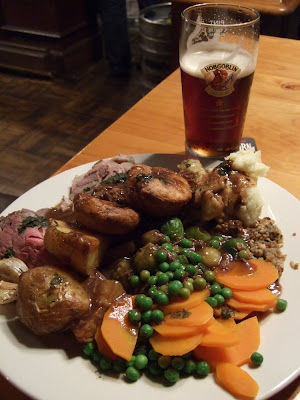 I think this carvery is better than others available in Yokohama station or Meguro, in my opinion. The meat alone is worth the price. It is admittedly a little red (as is often the case in Japan or indeed outside the UK) but still it tastes fine and isn't too chewy and uncooked, like certain other carveries. I thought the lamb was very, very good. The veg is standard (but good), however he does keep the mashed potatoes in a rice cooker, so it's always hot and never dry (great idea). The roasties are fine (cooked with garlic- interesting) and the Yorkshire puddings are very, very good. The gravy is a meal in itself.

It was so good, I just couldn't stop, until I had to. Man, I was fit to burst.
Here's a pic of us all, just before I exploded. 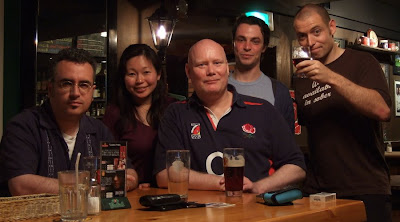 If you haven't been here, I recommend trying it out. Also close by is the craft beer bar, The Craft Beer Bar! 10 craft beers on tap and all Japanese. Also within walking distance is the Pivovar Yokohama (Yokohama beer's small Czech style craft beer bar with 8 beers on tap). However, definitely don't miss checking out the Full Monty. Good value and a knockout Sunday Carvery. 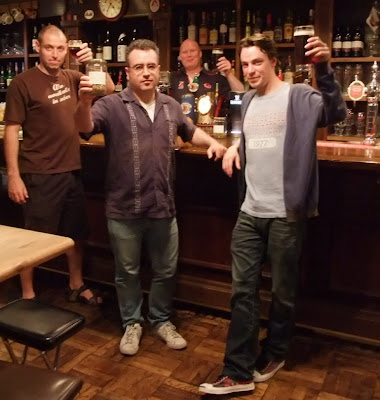 "See you soon at the Full Monty!"