Speakeasy Prohibition amber ale - but I don't like ambers

Speakeasy Prohibition amber ale is imported by a good friend of mine, Andrew Balmuth, of Nagano Trading. They also bring in a load of other high quality American craft beers, including Stone, southern Tier, Greenflash, Great Divide, Maui and many more. 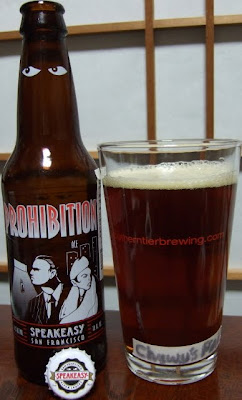 I must admit, I'm no fan of amber ales.
The reason I have it is because I managed to win a prize of 4 assorted beers from a raffle draw on the recent Nagano Trading December to Remember beer party.
I find it nicely made but again it's an amber ale and I don't care for the style.
It has a fair bit of life in it but I just don't like the caramelly taste and flavour. Its not my cup of tea.
I'm liking it less as I drink it but that is not the beer's fault - it's mine.
I can tell this is a good beer. A lot of carbonation and a fair bit of caramel in the flavour.
It's a lively, hoppy beer. A tad bit sour in the taste (yeast at work?). Astringently lemony grapefruit hop zested flavour on the tongue.
I prefer the Big Daddy IPA to this, but then again that is because I don't really like - yes, you've guessed it - amber ales.
Well, I tried it, as it was free.
I also have another amber ale in the assorted 4 pack (sigh).
The Ballast Point Callico Amber ale.
I'll give that one a go tomorrow, perhaps.
Right now, I've had enough amber ales for one night.

Prohibition Amber Ale - 5/10
A bit too sour and I don't care for the style but not a badly made beer.
Hey, if you like ambers and aren't as 'beer racist' as I seem to be, you may well enjoy this!
A gassy, spritzy, zesty, light bodied, full of life amber ale.