'tis the season to pimp your IPA: A Yuzu challenge

Today is the 21st December, Winter Solstice, Darkest Day of the year, Chuwy's Birthday. It's also the time of the year that Japanese put a yuzu in their bathwater.
Yuzu is kind of a strange Japanese citrus fruit that's very lemony, grapefruity, zesty, zingy and looks like this: 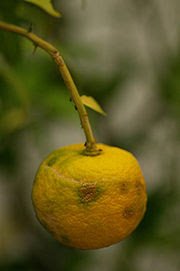 Well, I do like yuzu and remember drinking a yuzu ale, made by Harvest Moon and finding it very nice.
Another time, whilst I was drinking (and being very drunk) Suruga Bay DIPA in the Numazu Taproom, I happened upon some strange fruit. It was a little like yuzu, so I squeezed some into my beer. Wow! It really gave the beer a fresh zing.

I thought why not try dry hopping beer with yuzu?

People do dry hop with fruit, so I decided to do a small, simple, controlled experiment, using my balls.

I had 3 glasses. I used my IPintheA as a control beer. 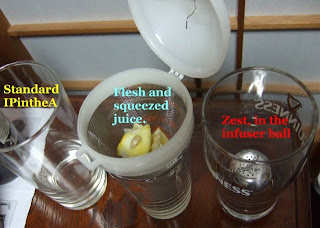 Glass 1 had nothing in it, so was just the beer.
The next glass help a mesh filter that had the yuzu flesh and some squeezed juice in the glass.
The third glass held one of my little balls, with yuzu peel cut up very small, inside.
I tried not to get any white pith in there, as the pith is bitter.


I then poured equal amounts into the 3 glasses.
The results may not be surprising.

The first glass tasted normal (as 'normal' as Chuwy's beer can taste).
The second glass with the flesh and juice was very aromatic but overwhelmingly bitter and sour tasting, from the juice and pith and flesh. This may be why Japanese mostly use the zest, for cooking and flavouring.
The third glass was nicely aromatic and just a tad to bitter.
I was hoping for a fresh zingy taste but just got bitterness, primarily.
One thing I did try next was to take my ball and dip it gently and briefly into my IPintheA.
The aroma was subtle but present.
The flavour bitter but not overly so. 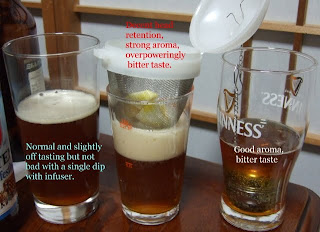 The zest was still smelling fantastic and zingy fresh, hours later after being taken out of the beer.
I think the best thing to do would be to dry hop a beer using just the zest and with as little white pith as possible. Then leave that gently soak for a few days, for the zesty zing to soak into the beer.
I didn't have a few days, so this experiment was quite limited.
Hey, you never know until you try, right?

Has anyone out there tried this, in one of their home brews?
I may try it out soon, seeing as this is the season for it. 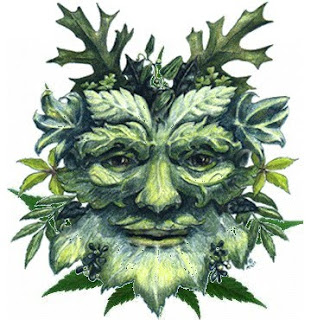