Last night, I eventually managed to escape the evil clutches of my old, slow, demanding computer and headed off to the Thrash Zone, one of my favourite bars.
When I got there, around 9pm, it was already packed. Standing room only, gentlemen. 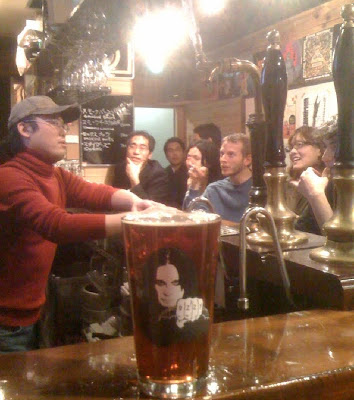 There were a few guys from the Yokosuka base drinking and being merry with their ladies, some Japanese salarymen, an American regular, a new regular from Greece and a few other Japanese regular customers. The usual suspects.
First up was a Simcoe Bloody Simcoe, a brew made as a collaboration between Koichi san of the Thrash zone and Atsugi beer, also in Kanagawa prefecture. At 105 IBUsand 7% alcohol, it's no cute kitten, more a snarling tiger of a brew.
Atsugi have been improving recently, bringing out a very good Belgian triple strong ale at the first Grande Bier beer festival in Roppongi that won itself many new fans. I remember visiting their brewpub a few years ago and not being impressed much by the uninspiring beers. It's good to see them improving. They have also made Yokohama honey ale, the Kanda Schwarz on tap at the JHA bar in Kanda and a collaboration beer for Cheers, in Yokohama - a Belgian yeast beer called The Joker.

This baby was available in a total of 4 combinations:
These were on tap, one at a time.
My favourite was the simcoe dry hopped.
Tonight, the last 20 litres of this lovely brew were on offer.
Thrash was also serving Stone Arrogant Bastard, on tap.
An amazing beer and one of my and many others' favourites. 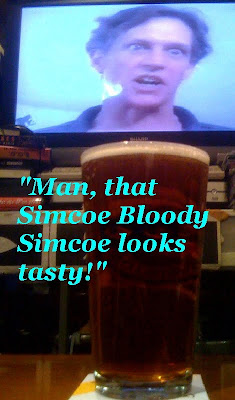 From memory, I knew I was in for something special. I wasn't dissappointed.
Well, maybe a little. 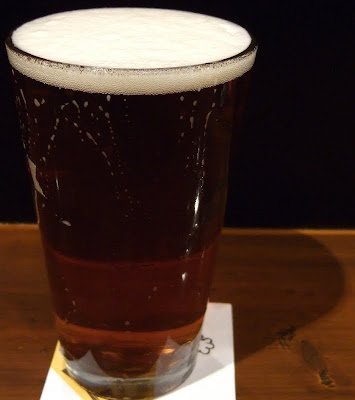 This didn't seem to pack the fresh hop punch that the first one I had did. It still packed quite a whallop, mind you! The balance between dry hopping flavour, aroma and the beer's own flavour seemed a bit out. I think the dry hopping came through too strongly.
Overpowering the original beer's voice a bit too much. They seemed to compete, rather than compliment. I've read that with freshly dry hopped beers, the sooner can sometimes be the better, in terms of getting the max from the dry hopping. It reminds me of a cup of tea, where the tea bag has been left steeping a bit to long. You can taste it. Whilst not being it's best, this beer is still quite nice and very drinkable, bearing in mind it's 7% and 105 IBUs of hops!
I'd give this one 5.6-6/10. It used to be an easy 7-7.5, but the flavour has changed. Not for the better, in my opinion.
Still this is a good beer and a special one. The last 18 litres or so are going fast, so if you want to try it, head to Thrash zone soon.

My second pint for the night was to give Minoh's W-IPA (DIPA) another chance: 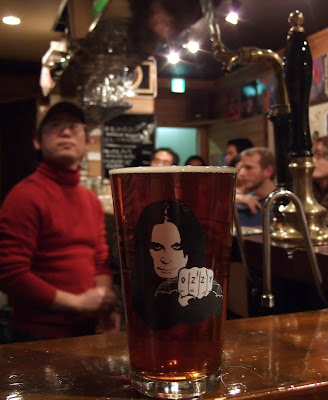 Minoh make some good beer. They are based in Osaka. The father and daughters brew the stuff and have won several awards (including being voted the world's best dry stout in the World Beer Awards 09 - WTF?).
Their most famous brew is their WIPA. 'W ' often being pronounced as 'double' among the Japanese, hence the DIPA being written as WIPA.
Their 9% DIPA used to really kick ass, a few years ago. However, the last couple of years, the flavour has gone from being an outstanding beer, to just a very good one or at times, mediocre and dissappointing. I'm not sure if this is due to a change in recipe or ingredients, but there has been a noticeable change. It's not just me who has noticed this and those beer fans who are not just obsessed Minoh lovers (Most breweries here have them - fans who loyally will stick by their brewery/team/tribe, regardless of whether the beer is still good or not.) will also accept this.
I do hope the W-IPA will regain it's place as possibly the best DIPA in Japan. So far, it hasn't.
Well, I decided to give it another go. The last one I had was just too malty sweet. Their DIPA has always been quite sweet, due to the higher malt profile and possibly more than a little unfermentable/unfermented sugars in the beer.
My first impression was that the colour looked very nice indeed.
The pouring as always in Thrash was first class. Temperature perhaps a little cold for the style but not super chilled and better than a lot of other bars in Japan (places here quite often serve the beer at almost Bud/Heinken/SuperDry serving cold temps, regardless of style).
The aroma was definitely dry hopped.
Way, way over dry hopped, in my opinion.
I smelled and tasted flowers, plain and simple.
My first sip was 'Oh no.'.
Is this now becoming a trend, among craft brewers in Japan?

Beers used to be based on the old German style - the lagers, pilsners, alts, weissens and schwarzes or dunkles.
Then the pale ales came on the scene.
Then the barley wines took off.
Then it was the American IPAs.
Now it seems everything has to be dry hopped and aggressively so.
I think this is going too far.

The Simcoe and Minoh were way too strongly dry hopped.
It was not easy to discern the original beer's flavour profile, the hops were just too strong.
I did not enjoy this beer that much.
It did get better, the more I drank it but maybe that was because my tastes buds were adjusting.
I was really hoping for some nice fresh, not too strong hop flavour and aroma, to balance out the sweetness from the malts.
I was dissapointed. Instead of the malts dominating, the dry hopping overpowered everything.

However, don't get me wrong, I'm not attacking the beer itself as horrbile. It wasn't a horrible beer and was very drinkable. The Americans near me loved it and referred to it as 'nose candy'. They had had quite a few beers before that, though - including a big bottle or the 2006 Double Bastard and a bottle of Rasputin Imperial Stout.

I thought it was too aggressively dry hopped. Too much flower aromas, almost perfume like.
If you like that, then maybe this is the beer for you.
It wasn't the beer for me.
Minoh DIPA still dissappoints.
Maybe I say that not because I think it's bad, just more because I know it can be better.
Minoh DIPA 5.5/10

The Minoh DIPA dry hopped is on tap across Tokyo now. Search it out. Let me know what you think. If you agree or disagree, I'd love to hear from you.

Finally, I went for a tried and tested favourite:
The Stone Arrogant Bastard.

Here again, Koichi san demonstrates the attention he gives to every pint poured - he even pricks the bubbles on the head for you! 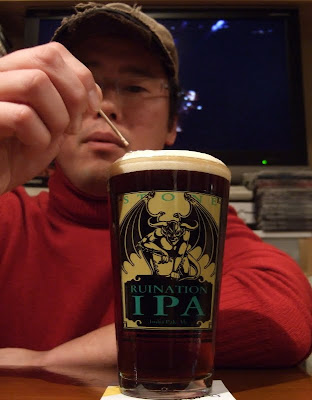 Just kidding. This beer is lovely. One of my all time favourites.
It was served in great condition and poured very well, as always. One thing I thought wasn't perfect was the serving temperature.
Whilst the owner tries his best to serve every beer at the best possible temp, there is only so much he can do, when he has to store them all in the same refridgerator.
This is why the Arrogant bastard comes out a bit too cold. Just give it some time, if you can and as the beer warms, the flavours and aromas will be released and the beer will just get better, with every sip.
My problem is I can't drink slowly. I've tried, but that crafty beer always finds a way to slide down my throat.
Verdict? 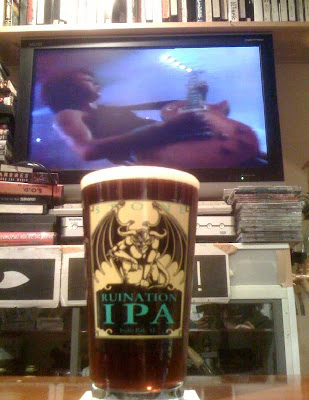 "Bow to your sensei!" 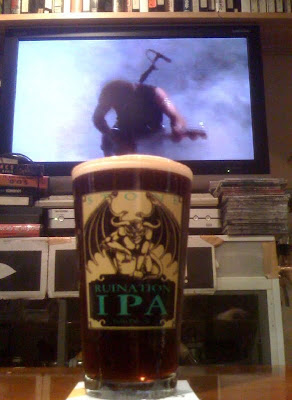 Beer of the night: Arrogant Bastard.