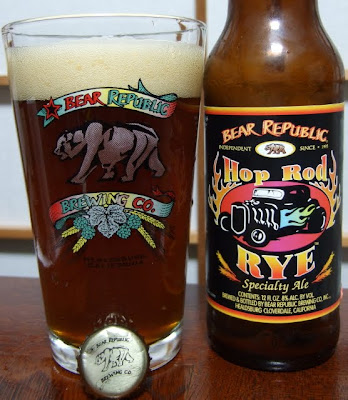 Off (just a tad - or is it?).
What's going on?
Won a 4 pack at a beer event and 3 of them are off.
not badly, but not as good as I KNOW they can be.
There is a chance that I am assuming this is off.
At least I didn't pay for them.
These beers must have been laying around in the summer sun or something.
They are all off in the same weird way( the hop rod being the least affected and best of the bunch, though).
Tart and sour tasting and sharp.

I've had hop rod rye on tap and in bottles before and I like it.
Just check out the ratebeer rating.
This does smell quite like it and tastes ok (better than the prohibition and the calico did) but still, something is wrong with this movie.

I've got a fair bit of sediment floating around in my hop rod.
more than the way I carefully poured it warranted.
however, upon reading reviews of this beer, I find others get this tot and it is from the yeast and the unfiltered nature of the beer in the bottle, so maybe nothing is amiss there.
It is the hop rod and it does taste good but something tastes, well, off.
Just a tad off but it's that which is annoying.
It's so subtly off that many people would assume this is the way the beer tastes.
I know it's better than this.
I thought to save this for last but I'm glad I didn't.
I opened it as I didn't appreciate the taste from my calico and wanted something I knew I would like.
Damn.

It's not far off, though but I do detect a teeny tiny amount of skunk.
Hop Rod Rye - 6/10
To be fair, as I finished the pint, the beer got better but the grapefruit taste - which is normal for this beer, along with the peppery spicy rye still held a tartness to it which matched the previous 2.
Please, don't let my ranting put you off thee otherwise fine brews.
I KNOW them to be good ad well made beers.
Just click on the ratebeer links to see what beer enthusiasts make of them.
Great beers.
Outstanding beers.
Just not the 3 bottles I opened today and yesterday.

Where are the good bottles?
Must I undertake a quest, to seek out the good beer, from the bad?
The good booze shops from the bad?
The ones who look after their beers and the ones (like mylocal - grrr!) who put the Super Dry in the refridgerators and leave the Unibrue, Stone and SChlenkerla in the summer sun or under the boiling hot winter AC?

Well, I shall accept this challenge and undertake this quest.
I shall out the bad and praise the good!
Starting as soon as I can get out of these tights... 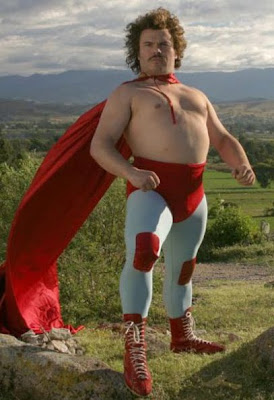