These Bairds are growing on me

After a recent dousing of Baird propoganda from those Good Beer Country Boys, my thirst for Baird Beer was high.
The time was ripe to see if some Bairds would grow on me.
Those boys from Kentucky have a liking for these brews and for good reason. They have to be some of the best beers in Japan (if not anywhere!) at the moment.
They have about 20 of their beers on tap at the NakameguroTaproom and about half a dozen or so at the HQ, the wonderful Numazu Fishmarket Taproom.
I decided to go with their regular brews, and chose 5 that were for sale at a store near my home (lucky!).
I went with the Angry Boy brown ale (a lot of people love this brew), the Rising Sun pale ale (American pale ale - also well loved), Teikoku IPA (British/American IPA), the Shimaguni Stout (Irish dry stout) and the Kurofune porter. 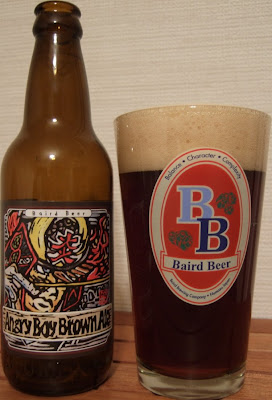 At first it tasted slightly off. It could have been something to do with the bottle or the fact that I poured most of the yeast sediment into the glass (something I sometimes do, as it improves the taste for certain beers - am I weird?). The alcohol is a tad over 6% and tasted like it. Still, very nice. It got better as I drank it.
7/10. 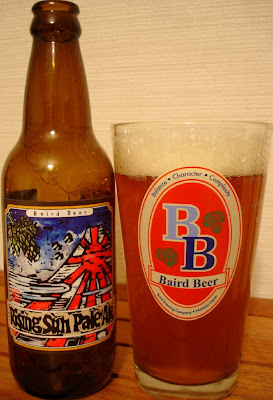 Quite a few people have this as their favourite. Personally, I do like this but I preferred the Celebration Ale, when they had it on tap. That stuff was awesome (as was their imperial pilsner)! Fruity and hoppy and full of life. Very good beer. I often include one of these in my sessions at the taproom, as a wake you up kind of brew. Something to enjoy and bring some sunshine, in between the serious brews. Not to put this beer down at all, it was also very good. But part of the beauty of these beers is that they are different.
Vivre la difference!
7-7.5/10 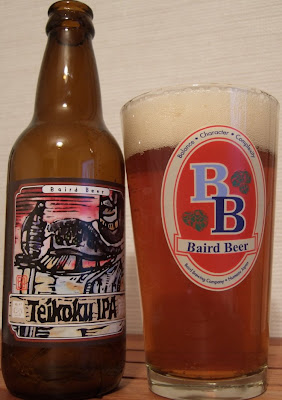 I find this beer to be more serious and mature, as opposed to the younger and more energetic Rising Sun. Very nice beer. Always appreciated. Never turned away. Perhaps more English than Americna, but some may disagree there. Perhaps 'neither', may be the more accurate description. Again, not meaning to sound harsh. This is a very nice beer. Nothing wrong with it. Solid.
7/10 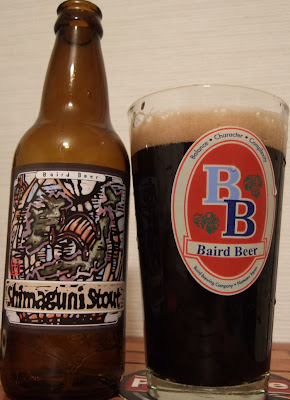 Lovely aroma on this baby. Mmmm...
Goes down a treat.
Nice stout which still retains that quintissential Baird taste - always in a good way.
Easy to put down, again and again. Nice, nice beer.
7.5/10

Last, but not least, the Kurofune Porter: 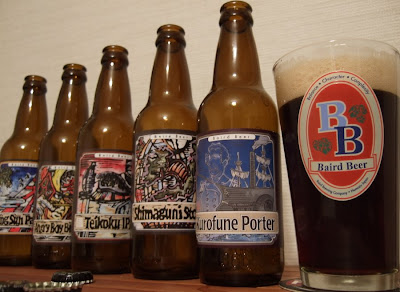 I assume it is named after the black ships, famous for assisting in 'coercing' Japan to open trade negotiations with the US. Well, I'm sure Admiral Perry would've happily swigged away on this stuff for many a fine evening.
This is my favourite for tonight.
7.5-8/10

Nuts. I just drank it.
2 am and time to go beddybyes. If you've met me, you'll understand that I need all the beauty sleep I can get!
Aplogies for the crappy descriptions, but I was doing other stuff whilst drinking.
If you're curious, then why not just grab a bottle and taste test them yourself? Or pop down to the NakaMeguro Taproom and have a few pints, fresh from the tap?
Baird beer is on tap at the Taproom and a few other places around town. Check out which here.
Happy hunting.