Yebisu silk - it's weird but does it taste like worm's ass? 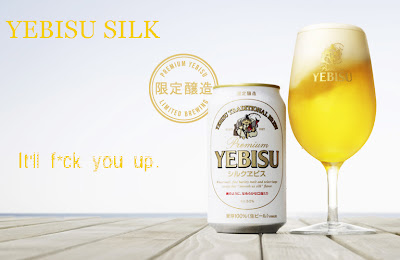 First impression from the picture above is WTF?
Is that head horizontal?
What the...?

How on Earth and according to the laws of physics can a beer have a head that pours at an angle?

This cannot be possible!

Inspired (and with sod all else to do), I decided to check it out.

Being the scientist that I was (It was a long time ago. I was young. I needed the money), I devised an experiment, to prove once and for all if this beer actually does pour at an angle.

I took one of my glasses and poured myself a Yebisu Silk.
Lo and behold, the results speak for themselves: 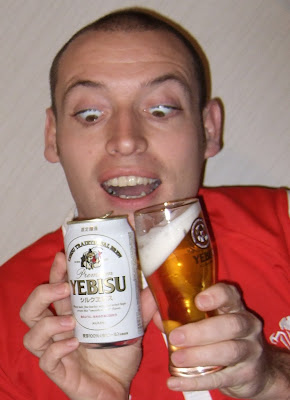 For some strange reason, this beer does not seem to obey the universal laws of physics. It seems to take the Gravitational constant and twist it on it's beerational axis.
Perhaps as the silk worms pump this stuff out, the vortex created by their twisted anuses somehow twists the very fabric of space, time and beer.

I shall write a report and submit my findings to the next edition of El Natural and the Intersensational Journal of Science.

It seems this beer can not only taste strange, it can behave strange also.

My next experiment clearly shows that it's strangeness knows no limits: 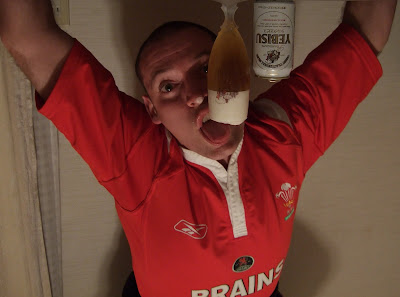 So, how does it taste?
Like it came from a worm's sphincter?
Well, truth be told, I wouldn't know - my limited funding wouldn't allow me to get hold of some silk worms, to find out.
It does, however, taste quite smooth and silky.
To quote Nate, from GBCB:
"This is the least palette offending Yebisu made to date.
The can says it contains wheat malt, which is where the 'smooth' comes from."
Smooth. Unoffensive. Unfeeling. Uninteresting? Perhaps.
Truth be told, I just drank three of the buggers, during the course of my experiments.
Does anyone know how to get beer stains out of flooring?