I was in Yokohama, drinking Baeren bitter in the Craft Beer Bar, 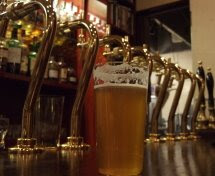 when I recieved word from a source, that a certain bar in Tokyo was serving Dick's!

I've never had Dick's before, so I was curious as to how it may taste.

Well, I just had to have my first experience of American Dick's in a Tokyo bar.
However, before I could get my mouth around the Dick's, I popped into a nice standing bar (Towers), not far from the bar with the Dick's on tap. I need to get all limbered up and ready for action.

In Towers, I enjoyed a nice half pint of 'cock&balls' morning coffee stout (with a nice, thick head full of cream). 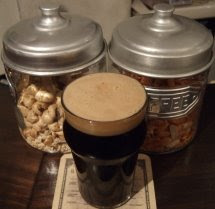 I only had a half serving of this, as I was saving myself for the Dick's, later on.
The coffee stout was very nice, maybe better than on tap at the Taproom, days earlier.

Now, I was ready to take on the Dick's.

I'm not one to mess about, especially when it concerns Dick's, so I got me a large portion of Dick's.

I was worried if I'd bitten off more than I could chew.

But the Dick's were good. Fruity, zesty, cold, bitter, hoppy, slightly tangy creamy - all in all, a nice pair of Dick's.

Here you can see me trying to get my frend and I a pair of large, wet Dick's:


The Dick's were so good, that I managed to find room to squeeze in one more small one. 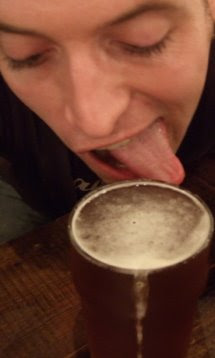 p.s. has anyone tried this beer?

Sounds dodgy to me.