Guy Fawke's Night in Aldgate - it was fireworks! 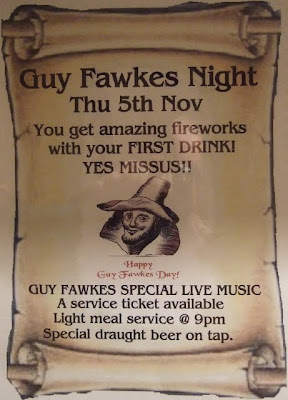 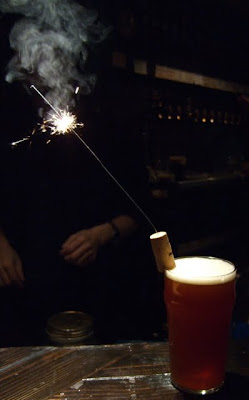 I had a great night.
A GREAT night.

I got there late. Around 9:30 - 10pm. The free food started being served from 9.
I knew big English Tim was there, plus a few other 'hunter gatherers', so I was worried that there would be no food left for little hungry me.
Never mind.
At least no food means nothing in my stomach to compete with my old nemesis, Mr.Al(cohol).

Mr.Al and I go back a long, long way.
Always competing for dominance and overall control of the elusive 'Chuwy mind'.
Some say it exits.
Some say it doesn't.
Some say they've even seen it in action.
Others put it down to a fortunate, otherwise random series of events and lucky choices, made by a deranged lunatic.
Both Mr.Al and myself believe the Chuwymind does indeed exist and we strive to get control of it first, before it's gone.

Who knows who will get there, in the end?
Who knows even if the Chuwymind will still be there, by then?

So, I got to the Aldgate and it was nicely packed full of all kinds of people.
Japanese boys, Japanese girls, English men, Candians, Americans, Scots, Jamaicans, Siberians, Lesser pandas (ok, so I may have made the last 3 up - but they could have been there), anyone who was anyone (and most people are, let's face it).

I made my way through the throngs of thongs and was immediately accosted by a fellow drunk, the Russian looking 'Oblamov'.
I think he had grown a beard and wore his trademark furry sweater, in an attempt to not look like Bruce Springsteen.
Nice try, Oblamov, but you can't fool me.
Here is a photo of Oblamov, taken after he removed his sweater and proceeded to get ready to use the toilet: As you can see, he does look a little bit like Bruce Springsteen. 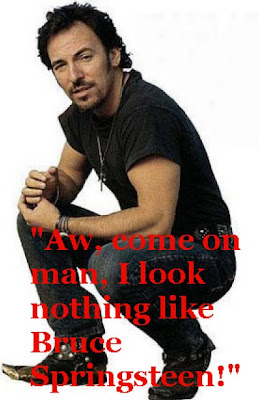 Please do tell him that, if you see him. He so much likes being reminded of that.
I got past the advances of 'The Boss' and made my way to the back of the bar.
I found friends in abundance!
It's awesome, being the last to turn up to a bar when others are drunk and waiting.
Everyone turned and shouted out 'CHUWY!!'
Man, I felt like a rockstar.
Oblamov, it must be awesome to be you.

All my good new friends were there and some older ones. It was so good to see so many familiar faces in one place.

The beers were coming thick and fast. The mian beer of choice for the evening was undoubtedly the Ballast Point Sculpin IPA. It was very, very good.

With your first pint, you got a sparkler stuck on the end of it. It was a nice idea for Guy Fawkes night. 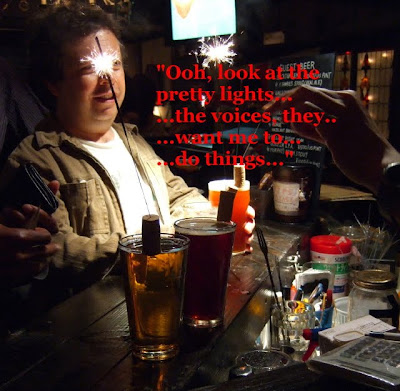 Some of my friends, however were not content to just drink ONE pint at a time!
I think this particular person took his t-shirt too literally! 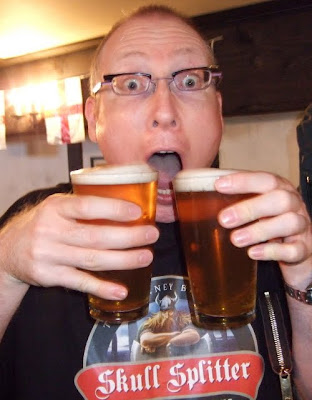 One skull splitter, coming up!
The beer was flowing and the live music was playing. It really was a good night. There had to be at least 50 people in there. It was more or less packed. Good business. With each pint you bought, you got a 150yen off token for the next time you visited The Aldgate.
Business was so good, in fact, that they later ran out of said coupons and had to instead offer 100yen off the price of each pint - not so bad! 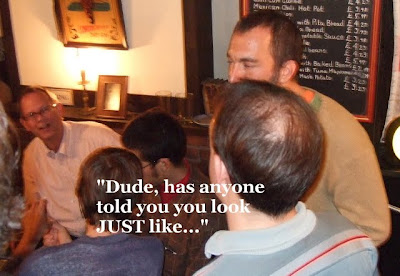 I brought some of my not near ready homebrew to give my friends a taste. A lot of people there were very knowledgeable about beer so I valued their opinion.
I think I brought my first ever beer before it was anywhere near ready. It hadn't even finished fermenting yet! Some friends were brutally honest. Others were very kind in their feedback. 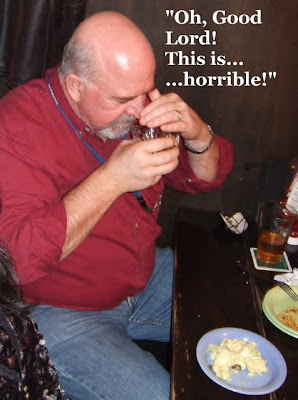 It's my first batch. No worries. It's my first baby and I love it, no matter what.
I've recently bottled the stuff and after 5 days dry hopping and almost 3 weeks in the primary fermentor, it definitely has some alcohol (aproximately 1%! Wink wink), so at the very least, it will get me blotto! 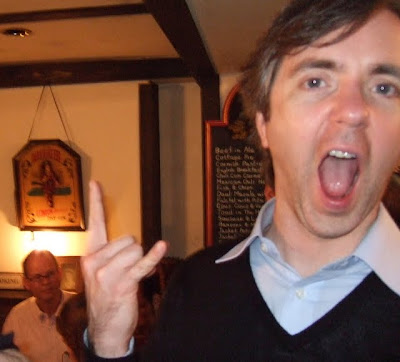 Showing The Boss how to rock and roll!
My first beer was a Gallowsgate IPA (Swan lake IPA). Nice but still too malty sweet. Not very balanced with the hops.
I decided I wanted to try the Murphy's Irish Stout next.
She came out very creamy:

I didn't mind. Something smooth to slow me down. Very nice she was, too.
A nice, happy beer. 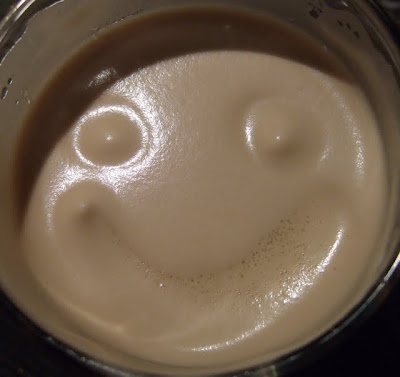 It was around then that I met up with a new friend. Tim.
He told me he read the Boozelist. After that intial shock set in, he thanked me and offered to buy me a pint. It took him a long, long time to finally wear down my resistance to that idea and about 5 seconds later, he ordered me a Rogue Hazelnut Brown ale. 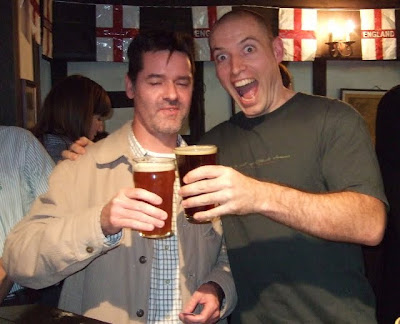 The weird thing was that the first friend who walked by was also called Tim.
I introduced them to each other and then the next guy who walked past was called...

So weird, that the two beer friends I wanted to meet my new friend, Tim, were both Tim!
That weirdness, coupled with the fact that someone had just bought me a pint, led me to believe that I must be in some strange dream.
I wasn't.

I decided I need another pint. I went for the Sankt Gallen stout.
What a weird, freaky stout she was, too! 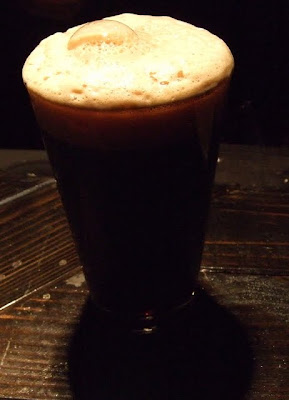 Jeez. Check out that freaky head! She tasted a tad strange. Not horrible, but strange. Sankt Gallen have never been known for their consistency. Occasionally they make great beer, but they also can give you something awful.

After talking, chatting and having a great time with friends my last beer for the night was to be the much talked about Ballast Point Sculpin IPA. 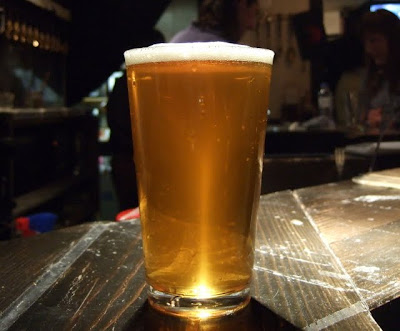 At 1500yen a pint, I could only afford the one and decided to have it last, to savor it.
She was a beauty.
lovely. Big hop flavor and aroma. Tropical fruits and mangos. Good gently malt backbone to it and she goes down nice. As you drink more and more, you like it more and more. Towards the end, you just want another. It was very good.


It was almost time to go. Just time for a quick shot of the 3 Tims, posing after the famous 3 monkeys image: 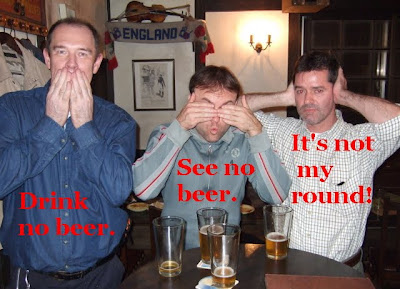 Good drinking with you, Tim, Tim & Tim!
I'm not sure when anyone will see such a congregation of Tims again. Possibly not in our lifetimes. I feel fortunate.

Here's some of the gang, as we left for our last trains: 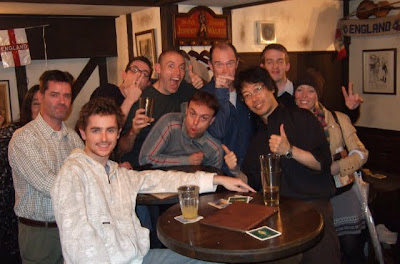 The guy on the right, in glasses is the guvnor. Great guy. Great pub. Great beer.
Great evening.

Until then, have a blast! 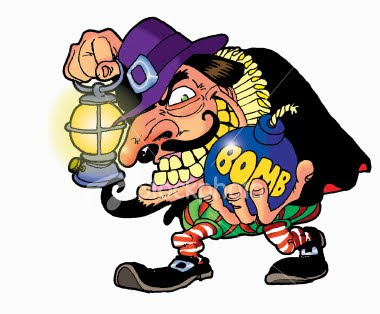