I try to update the boozelist everyday, so I'm sometimes catching some breaking news from the breweries/bars. Well, just a few days ago, Yokohama beer released a few of their newer beers in bottles. These beers were the creations of their offshoot Czech style bar - Pivovar Yokohama, downstairs from the original beer restaurant. They are releasing a number of new beers. I decided to check them out.

I headed down to Yokohama to see if I could grab hold of one or more of the new Yokohama beer Pivovar Yokohama produced beers. 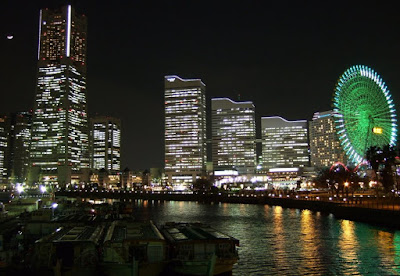 I couldn't find anything at World Porters' nice booze selection, so I made my way over the water to the source of the booze - Pivovar Yokohama!

The new young brewers (and boy, are they young!) have been working hard lately, bringing out some really interesting beers. Crossover is still on tap at Thrashzone. A hop monster of an American IPA and specially made for Thrash Zone, it will kick your taste buds' asses! Their Liberty Ale aint no slouch when it comes to the hop department, either. Their English IPA won gold at last years Yokohama beer festival. Their hefeweissen also won the gold at the same festival. They are also releasing a Bohemian pilsner, a Dusseldorf style alt, a German hefeweissen, a Belgian style white ale and a Bohemian style dark lager (based after the famous Ur Fleku dark beer in Prague).
Here are the boys, in all their shiny glory: 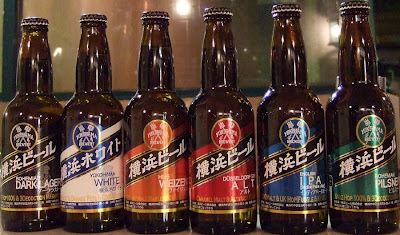 The bar itself is an ingenious use of the bottom of a set of stairs. That's basically all it was!
Here, you can see the actual bar space. It's pretty small. The entrance to the building is on the left and the actual brewery is on the right (you can see one of the tanks through the glass). 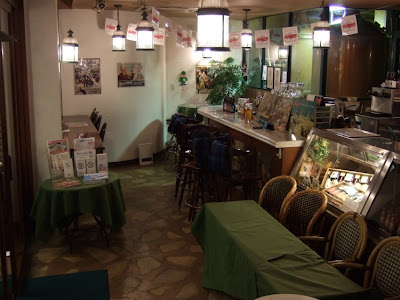 There's a small counter or bar that seats about 5 on high stools. There's a small counter facing the outside window and a table for 4 in the far corner. Not very big but I think they've squeezed in about as much space as they could. I was suprised they could make a bar there at all. The larger, main restaurant is upstairs. Strangely, the upstairs beers are the normal Yokohamma fare and you can only get the interesting new Yokohama beers downstairs, in this bar. I don't go upstairs anymore, unless it's to visit the toilet.
It's all rather strange. What adds to the weirdness is that every now and then they hold functions upstairs and you end up with a large party of people coming down the stairs, right next to you. 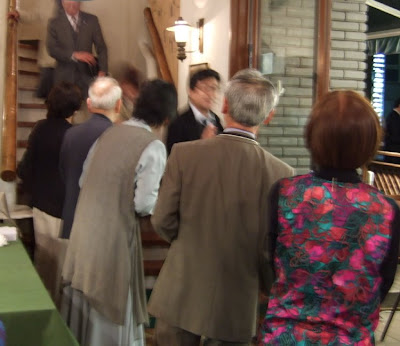 Sometimes they have weddings or retirement functions and you can find yourself in the middle of a group of pensioners all yapping away or catching the odd stray bouquet from the bride, in which case - congratulations!
I always get the pensioners.

Okay, so the beer. How was it?
Cold, but not bad.
First up was the Bohemian dark lager: 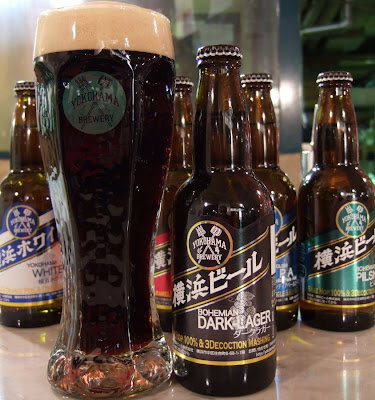 Made with 100% saaz hops and using triple decoction mashing. They say this is styled on the famous Ur Fleku dark beer in Prague. I've been there twice and drank their beer and yes, it's a bit similar, but of course it's not the same. That would be boring, wouldn't it?
Usually, I don't care much for Czech Cerny or dark lagers. This, however, isn't bad. It seems less caramel sweet than a Cerny and has a more solid, silky mouthfeel. I get a little hops and lots of malt. Not much aroma here, but then we are slap bang in a brewery, so it's pretty hard to catch the subtleties of any particular aroma or ingredient or process from withing the glass. It seems quite chocolaty. I taste chocolate, slightly bitter but not really swet. Rather nice, actually. Relaxing. I don't believe this is high aclohol. I'd be suprised if it was over 5.5%. I didn't ask. I could drink this after a dinner and not feel bloated. Not a bad brew.
I'll give it a respectable 5.5/10. It doesn't get a very high mark because, as I mentioned earlier, I just don't really go for the style. I'd be interested to hear what other people think of this beer.
I thought I would like their chocolate stout, as it started to warm and showed promise. However, as it reached what I considered to be optimum temperature, the beer died in my hands. Dissapointing. This dark lager wasn't dissapointing. It was quite nice.
Bohemian dark lager 5.5/10.

Next, I ordered a Liberty Ale.
I'd recently tried the dry hopped (using cascade hops) version, on tap briefly in McCann's bar in Musashi Kosugi. Wow! That was possibly my favourite beer this year. Pity the one barrel is gone now. I only had the three pints of the gorgeous nectar.
I had tried the regular Liberty ale once or twice before and wanted to give it a go again.
Yokohama Liberty Ale: 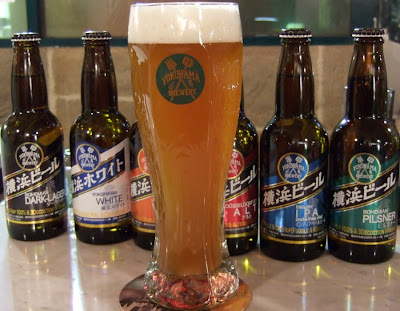 As you can see, it's a lovely, almost tangerine colour. The aroma is very, very nice. Flowers and hops abound. However, the mouthfeel is way too hoppy bitter. Rather like it's brethren, the Crossover, this is a hop monster. I think it's got too much bittering hops in here. It just doesn't taste balanced, but then, like the Crossover, maybe it wasn't meant to.
The dry hopped versions of both the Liberty and the Crossover for me were the better beers. Perhaps the extra aroma hops compensated for the excesive bitterness in the normal versions? I'm not sure. All I know is that at the Crossover event, everyone seemed to prefer the dry hopped version and actually thought the normal was the dry hopped at first!
I know Tim M and I only intended to just taste the dry hopped Liberty ale at McCanns. Three pints each later and we were still ready for more!
This baby is nice but alas, I've had it's sister and it's like comparing Beyonce to Oprah Winfrey. You know which one you enjoyed the most and which one left you feeling bitter and with a strange taste in the mouth. One is way too rich, off it's head, one dimensional, unbalanced and the other has a great ass that just doesn't quit. 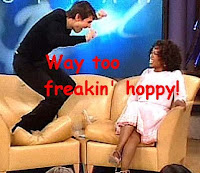 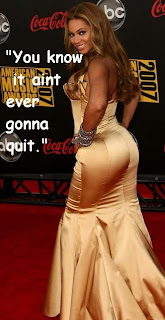 Next, I decided to try their Bohemian pilsner (incidentally, they still have a special on their bottled Czech lagers - Urquel, Gambrinus, Kozel, Radegast 500ml for 800yen) and see if it could match up to the real thing.
Yokohamam Bohemian Pilsner: 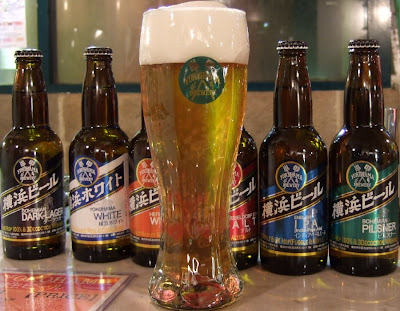 Also 100% saaz and triple decoction mashed. This baby smelled gorrrrgeoussss!!!!
Alas, it tasted jsut way too sweet. Too malty. The hops dissappeared in the malt.
It needs more bitter hops in there. It's not dry enough. The dryness fades fast and the sweet malty taste takes over. Nope. this aint no Urquell.
Pity. Lovely creamy head and fantastic aromas. It really promised something, then after a quick try, I was left with just a handfull of tissue padding. I wouldn't normally care but she certainly didn't prove out to be what she seemed, on first impression. She's not all that she seems to be, fellas.
Still, underneath it all she may be nice enough, but I feel cheated, lied to, decieved.
Bohemian Pilsner 4.5/10.

All in all, I'm glad I got to try these three beers, the vanguard of the new Yokohama Beer initiative. Keep your eyes and ears out for this brewery in the future. Who knows where they will go next?

You can buy their beers in bottels at many locations in the Yokohama area including quite a few bars and the list is growing (even London Pub Towser, you BGCBoys!).
I recommend the IPA (once it warms up) and perhaps the Liberty and dark lager (if you go for that style). I grabbed a bottle of the hefeweisen (had it before on tap but I want to try it from the bottle) and the IPA (also had it on tap a few times) to try in the comforts of my own beer bunker home.

p.s. Little did I know until I'd gone all the way to Yokohama that they were selling their beer in my local Toyku store!
So I guess I'll be trying the rest of them soon! 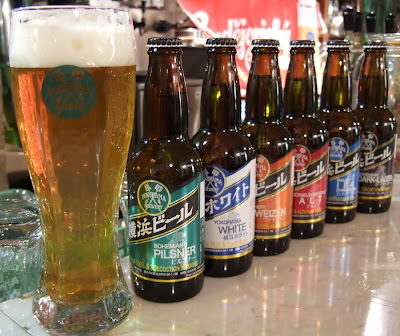 p.p.s. can you guess what I've been drinking, whilst I typed up this blog entry? 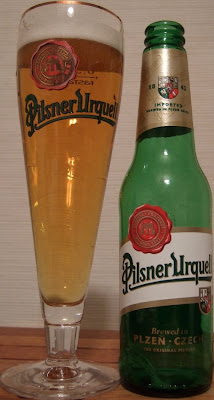 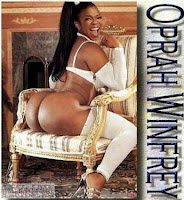