What does green smell like? - The new Suntory Malts! 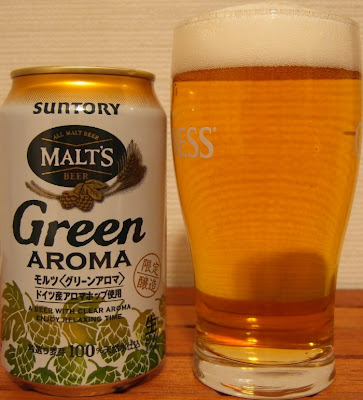 Does it smell green?
I'm not really sure. The can says 50% more aroma hops.
Couldn't really smell much, as I think I'm catching a cold (or am I just being kind to Suntory?).

The bitterness is there. Left a bitter taste on my tongue. Not such a bad product, this one. Could drink a few cans, but only if the alternative was Yebisu silk or almost anything by Asahi.
Tastes a little light bodied but not so offensive as some I could mention.
Suntory sometimes comes out with some ballsy (at least by the big 4 standards) products.
this may be one of them.
Don't think it will replace the Suntory the Premium Malts as many standard big 4 Japanese beer drinkers' favourites.