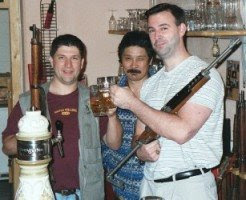 Seeing the good beer and country boys DH sporting twin M16s reminded me of shooting off the huge high calibre air rifles back home, when I was young.
Enormous guns, they were. Capable of ranges reaching about 100m or perhaps a little more, if it was a windy day. We used to shoot coins off pieces of string, by shooting the string. Good fun and no animals were hurt (although I couldn't say the same for the string - or the human shield of little kids we made to stand behind the string, so as to stop any stray pellets from injuring any animals.).
On the farm, we have a few shotguns and a .22 rifle, which has a range of a few miles (pointless where I live, as it's so hilly, you can't even see for a few miles, unless you go up on the top, and then it's best not to carry a gun, as the SAS and commandos train up there all the time (as it's so wild up there, the army use the area as a huge training ground).

Not long ago, I tried my hand at airsoft.
It's actually suprisingly good fun, until you get shot (which is needless to say). I kept getting shot in the arse, which really is no fun at all. Those things really do sting and I was left with several bumps on my forhead and skinnned knuckles.
Here's a montage of us in action, the one time I tried the sport out. Check out Rambo at the start. The guy filming it (we took turns) actually missed this idiot in the camofluaged blue balaclava (it was the only thing I had handy) starting things out by doing a Hollywood style sideways roll whilst shooting blindly with his borrowed submachine gun. Somehow, the bloody fool managed to kill the entire enemy team single handed. My back still hurts from that forward roll I did. Bloody idiot.

I apologise for my silly commentatry later on.
It was fun, though. 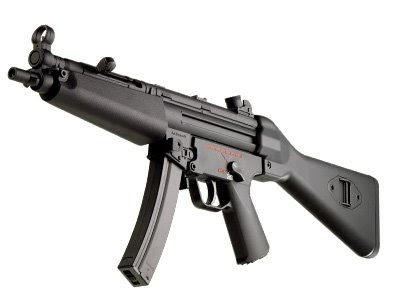 plus another MP5 spring loaded rifle plus a cool H&K gas pistol and holster. Picked them up from an Iranian freind for a song. Sounds so cool and dodgy - buying guns from the Iranians!

I'm gonna have to go try them out some time. The boys sometimes go out at night to a remote park and shoot each other in the ass. Hang on...that sounds dodgy, too.
I meant with their big black guns. Their pistolas. Their manly weapons that shoot out their tiny balls at high velocity.

Perhaps the only thing that goes better with guns than beer has to be gorgeous girls! 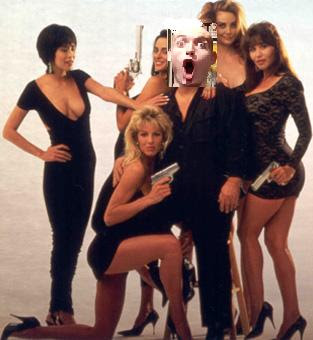 A man simply isn't a man unless he's shooting off his gun or smoking a pipe, naked from the wiast up and dousing himself with the glorious smell of Mandom!
Grrrr!!!!!!!!! 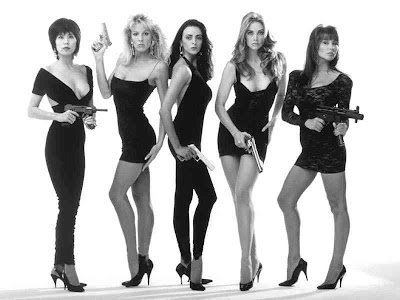