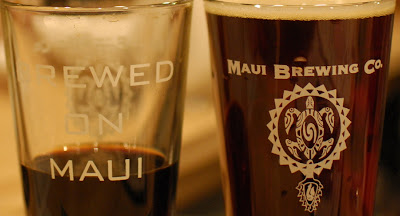 Last night, I popped by the excellent Devilcraft  bar in Kanda. They were having their very special Maui Brewing event.
Maui Brewing of course hails from the Island of Maui, in gorgeous Hawaii. For last night (Saturday) and tongiht only, they are offering about 12 very special craft beers from Maui Brewing. Most, if not all of these have never been in Japan before, so this quite an opportunity to taste the best Hawaii has to offer.

After  a short 2 minute walk from Kanda Station (south exit, JR), I arrived and noticed a few friendly faces already at the bar. 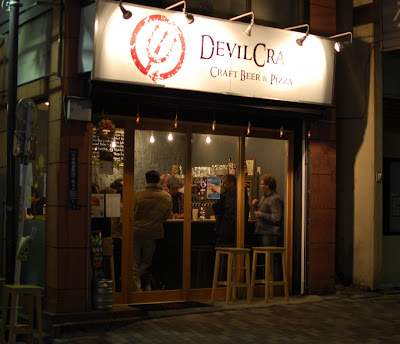 Some of you who regularly hit the craft bars in Tokyo and Yokohama might already recognize 'Irish' Neil on the right and that's Jesse next to him, a very good homebrewer and cool dude - he surfs and brews, so those are two most excellent qualifications!


They are ALSO holding a special offer, for this event. Buy a stamp card for 5,000yen and get 5 pints PLUS a free pint glass to take home (provided they still have some -limited to about 25 or so pint glasses per night).
This is a very good offer, seeing as some of these beers are high strength and normal cost is up to 1200yen a pint.
Not only that, hand in the completed card and you go into a raffle for more Maui prizes. It's a no brainer, really. You can use the card for both days but I knew that was never going to happen.

My first beer for the night was the Island hopper red, an American red ale.
The beer looks good. a nice roasty red color with a decent thick foamy off white head.
Nice aroma, good fruity American hops and a hint of caramel, Just right.
Good hoppy fruity flavor, giving hints of mangoes, pineapple, pine, grapefruits & nice caramel from the crystal malts blending in with it but the body was just so light and thin. Half way through it kind of felt like I was drinking flavoured water, it was so weird. I think this is their 'style' and it could just be I'm used to beers with a bit more body to them. Not a bad pint.

My second beer for the evening was the Black Rock black IPA.
This Black IPA was a nice one. Nothing full on, gentle toasted flavor in there that reminded you it was a black IPA (using black or highly roasted malts to get the color and a little depth of flavor, without adding too much body to the beer) but otherwise felt like a nice hoppy pale or again a light bodied, drinkable IPA, going down. Still a bit thin bodied and light tasting but the speciality dark malts helped add a bit of character to it.

Right, third up and this one was the Shipwreck Stout.
The stout was an oatmeal stout (I think it was labelled as one). Smelled lovely! Nice roasty aroma with cream/tan head. Decent roast flavours mixed with cocoa and dark chocolate in here. Again a bit on the thin side, body wise, going with expectations. Don't mean to be unfair to Maui as they clearly seem to be designing their beers to be like this. Perhaps they think it suits the island way more to have thin bodied beers? I picked up a hint of coconut in this one. As John mentioned, it could be from the oats or possibly maize or other grains that might be used in here. Still not a bad, if a light oatmeal stout.

Only two spaces left on my card. Nuts. time to go large.

Next up and number four was the Imperial coconut Porter.
The imperial coconut porter was pretty nice. Bit of high alcohol flavours in here but thankfully less coconut than the normal coconut porter.
A LOT of people love the coconut porter but I'm not such a big fan of huge flavours in my beer - I mean coconuts, bourbon, oak etc.
This beer certainly has more presence  and 'weight' in the body, thanks to the coconut and dark malts.
You can taste the cocoa in here. The beer uses "cocoa nibs, blended with the toasted coconut during the maturation process to intensify the aroma of coconut and dark chocolate" and you just about notice.
Quite a nice pint and one to take your time with. Let it warm up and appreciate the aromas and flavours as they are released.
7/10

Damn. Just one space left.
Luckily, I'd been granted a taste of Jesse's beer when I arrived and knew what it was that I wanted.

p.s. if you are interested in trying some production Maui beers (these may not be from the brewpub), you can find them in some craft stores, like Sugaya and Tanakaya or you can buy them here. They aren't that cheap though.