Meeting 2 men at night in the park...

Last Saturday, I had planned to meet up with HomebrewJapan and Jonno, somewhere in Yokohama for what was supposed to be a pub crawl and homebrew tasting session. Through various unforseen circumstances, the pub crawl was a non event but the homebrew tasting was definitely, definitely a good event.

As always, I was running late. I was running late before I cycled like the wind to the station, locked my bike then remebered I'd left my phone charging, back at home. I once again arrived back at the station, covered in sweat. So much for the shower.
Poor homebrewJapan was by then making his way down to Yokohama, after cancelling his date with a certain Ruination at DryDock and would wait for me in the Full Monty. Well, he was there and he was still there when I called from Yokohama station, a long time later.
I was running late again.
Jonno was calling me from Yokohama beer's brewpub (Pivovar Yokohama) and Italian restaurant upstairs (Sol Ponte).
HomebrewJapan was calling me, looking for directions to the Craft beer Bar (that notoriously difficult to find hole in the wall) and wondering where I was.
I was between a rock and a hard place.
I walked from Sakuragicho station to Pivovar Yokohama to meet with Jonno, where we would then walk over to Kannai and meet HomebrewJapan in the Craft Beer Bar.
It was not long after I walked into the Pivovar, when I met an old friend.

Here's me, posing for a photo with Pivo, my dear, dear friend. 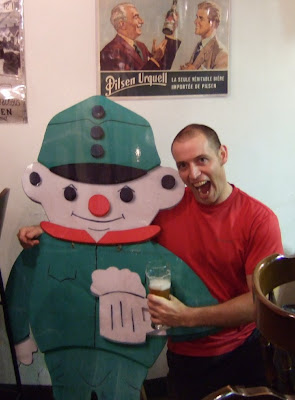 Great guy. always has a pint in his hand, every time I see him. Every time. Amazing guy. Never says anything. Just stands there, smiling. Oh, the late night conversations we would have...

Jonno was upstairs, tasting the tasting set from Yokohama beer's normal beers (the original ones, before this new Czech style section of Yokohama beer opened up). I got us both a quick pint of Green Fresh American IPA for the road. Damn, that is quite anice beer. I'm glad they still have it. Some bars that serve it call it the Yokohama American IPA. Others call it Green Fresh. It was made for the Green Sheep bar in Yokohama, hence the weird name. One bar in Tokyo even advertised it's draught beer as being Green Flesh. Lovely.
We enjoyed a nice quick pint of the Greenfresh and alovely view of the new young lady working on the bottling machine, just behind Jonno in the picture there. Seems like a nice girl. At least I hope that was a girl. 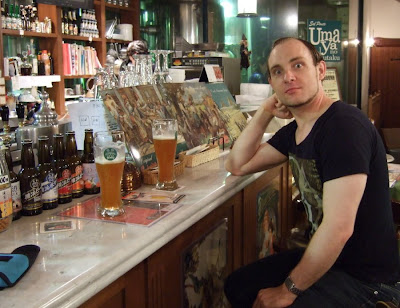 This one was definitely not a girl.
Well, we walked and talked and eventually got to the Craft Beer Bar, just as homebrew and friend were well into their 2nd beer. They tried the Minoh sansho pale ale. The san sho means something like moutnain spices/herbs. It's the same stuff as they sprinkle over the anago (eel) dish. Strange thing toput in a beer. I think Isekadoya also has a sansho pale ale now. Strange. I found it to be too herbal/flowery tasting and smelling. No thanks.
This was when Jonno started to get all generous. He bought me a pint.
Here is the Saison Sauyuri he bought for me. 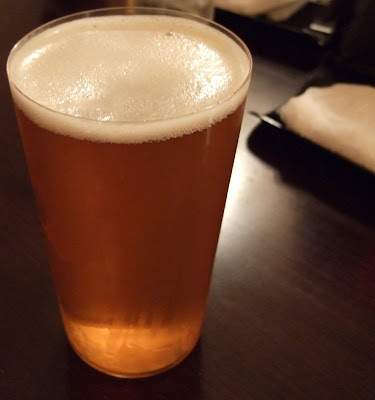 Thanks, Jonno! you're going up on the blog, mate!

Then HomebrewJapan took out his bottles. I was suprised. I'd hoped we'd be lucky enough to sample about 2 beers. I think he must have taken out at least 6 bottles!
Awesome!
Here the next two pictures cleary show the difference between beer brewers and beer drinkers (or Australians): 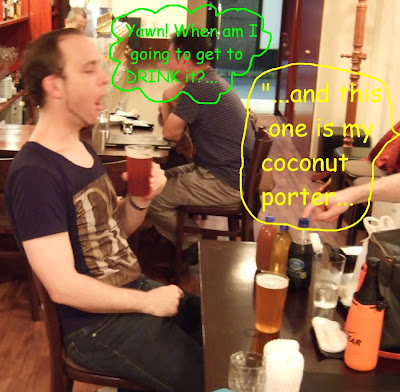 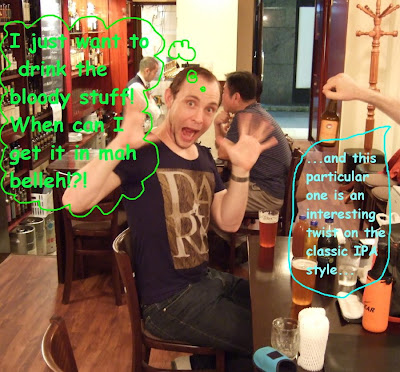 After listening to HomebrewJapans descriptions of his brews, it wasn't just Jonno's mouth that was beginning to water.
I was really looking forward to tasting that stuff.

We walked to near Yamashita park and found a great little spot to sit down and enjoy some imbications.
I brought along my cooler bag and 3 glasses and we got underway.


But first, I opened a special beer to get us warmed up with. It was Ballast Point's Callico amber ale. A very nice amber ale, made in San Diego. HomebrewJapan posted a blog entry about how he had one of these at Cataratas in Shibuya and he thought it so off tasting that he returned it. I wanted him to have a second chance, as I had tried this beer once and though it to be very, very good. 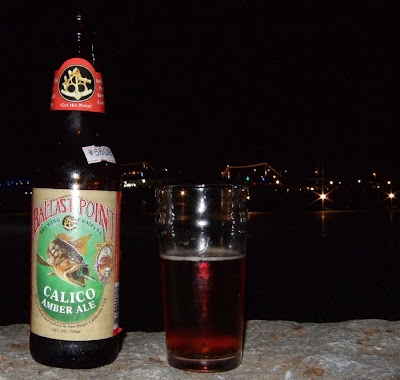 It was.
He agreed that it must have been a strange pint, at Cataratas. It happens. Perhaps thye jsut forgot to flush the pipes after changing barrels. Who knows? I've had dodgy pints in many places. I have had the worst Guinness in my life at Popeyes, once.

After the Callico, it was time for some homebrew! Here is his pilsner. 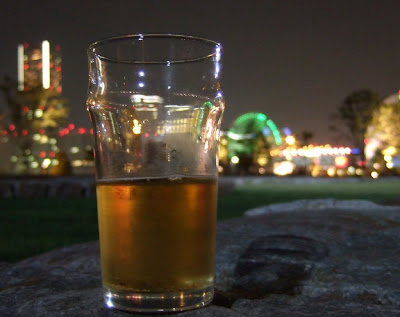 Made using just Saaz hops and boy did it smell and taste good. It just lacked carbonation. He explained that he had force cabonated it (still didn't catch the decription of that as I was taking silly photos) and so it tended to go flat fast. It definitely showed promise and the saaz was coming through lovely. I'd like to try this again, if he makes it again. Quite a good beer.

Next up was I think the 'IPA' he made at Hitachnio nest - was that right, homebrewJapan?
Or was it the English-American IPA? 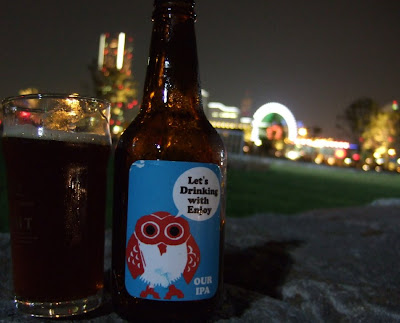 This seemed almost like a pale ale hybrid with rye and wheat involved in there. Interesting.
For some reason, I kept thinking of bananas. Old ripe bananas. Strange. Maybe the wheat/rye mix? Still, again it wasn't bad.

The next one was the coconut porter and boy was that nice. Light taste and very refreshing. Body but gentle to medium mouthfeel. I could knock that stuff back by the pint. If it was in a bar, I'd get a pint. Strong coconuts but not overpowering. They just added to the refreshing value. Good beer!

We also tried his Hitachino Nest white ale.
I must say though, I'm not a big fan of the white ale. Too many herbs and spices in there for me. Too much coriander and ginger, perhaps? This seems like that, so not my favourite style. That's just me. I think Jonno liked it.

Here's the final beer that I brought with me, to say thank you. 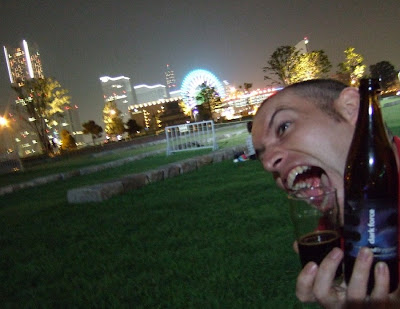 It was Dark Force, an imperial wheat stout by Haandbryggeriet. It wasn't just the beer that was a mouthful! Not abad brew, that one. Quite a nice one to end the eevning's tasting wiht, too. something big, black and strong.
Rather like this guy:


After our foray in the park, we headed off to Yokohama and the Thrash Zone.
However, it wasn't to be, as the Thrash zone had mysetriously closed ofr the evening. It was about 10or11pm, on a Saturday. WTF?
Weird. This isn't the first time Koichi san has 'gone bush' on me.
Don't take that the wrong way. I was referring to how sometimes the native poeples of certain countreis would just get up and walk off, into the bush (forest/undergrowth/desert), on walkabout and not come back for some time.
I've been sat outside his abr before, for 45 bloody minutes, whilst inside his locked entranceway, the lights were on, heavy metal music was playing loudly and there eere 3 unfunished pints on the counter! He later told me he had "popped out to buy food". Uhuh... 45 minutes. music blaring. Beers on counter. Weird.
To be fair, if they were all crouching down behind the bar, hoping I would dissapear soon, then they did well to remain crouched for a full 45 minutes. The buggers.

Well this time there were no lights, no music, no beer, no sign outside, no nothing. Even the shutter were pulled down. Strange.

We then walked off to Cheers, in search of St.Bernardus Aboot 12.

Cheers was open. I learned from some local customers that eprhaps Kiochi san from Thrash was sick. I sent him amail 2 days ago, asking if he was ok. No reply so far. It's all very strange, as I had a mail from him on the very day he was closed. I was telling him we were coming by and he said he would see me soon! Weird.

We all had a St.Bernardus Abbot 12.

Jonno got stuck right in! 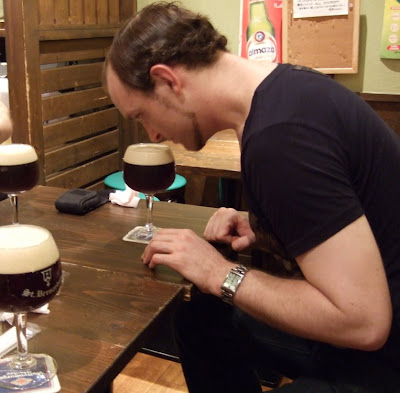 I decided, 'when in Rome...' so shoved my nose into the beer as well. 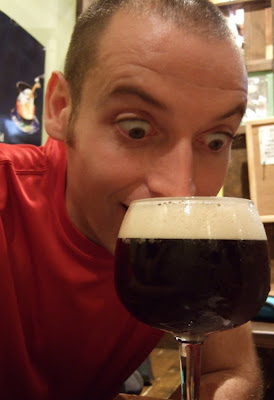 Nice complex aromas. A good beer. I think I read that these guysa ctually made or used the same recipe as that 'best beer in the world' Vestbltrenlebvnenlenefancyfancyteven. i have 2 vestypantycreamers in my fridge, along wiht a St.Bernardfus Aboot 12 and one or two other similar styled beers, to do a nice comparison sometime.
I found the St.Bernardus to be quite nice.
I'm no fan of Belgian beer so I can't really comment on the tastes in high detail (I as also a bit tiddly at the time, you see.).
Stil, a nice beer and I think it was about 1200yen or 1300 yen for the 330ml glass. Not too bad, in a Belgian bar.
St.Bernardus Abbot 12 - 7.5/10. 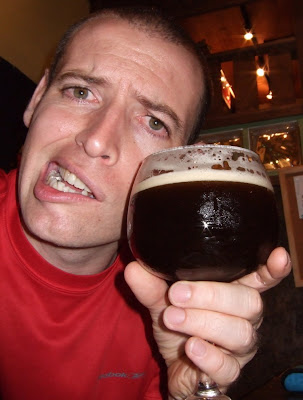 All in all, a very nice evening. Ended wiht everyone rushing to get the train and yours truly left wiht the bill. I also legged it to my last train, got home, then had some weird yuzu ramen.

Strange, unusual and thoroughly enjoyable. Just like that evening. 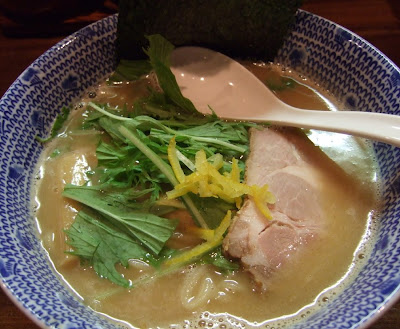