I was cycling around the neighbourhood tonight, when I came across a new beer. I quickly wiped off the can and proceeed to the checkout to purchase said can.

It was the new yebisu.

Yes, they went and made another one.

So, what's the verdict? 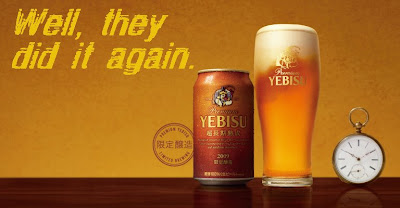 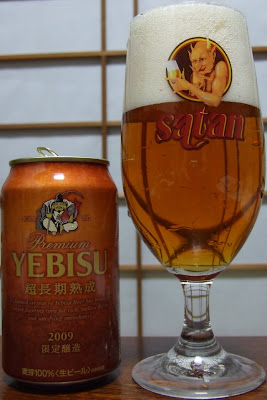 It's supposedly lagered for twice as long, has 100% malt content, uses Bavarian aroma hops and is made using Yebisu yeast. 6% alcohol and tastes it too.
Not a nasty tasting beer but not much of anything, really. Tastes a little tinny, though I'm not sure if that is actually because of the can or not.
Smells like a Yebisu (what a suprise) but the aroma of alcohol is present, not in a nice way.
Not sure how much Bavarian aromoa hops are in there.
I was quite impressed with the head rentention. Easy there, cowboy. I've almost drank the beer as I type this and there is still a faint lacing of head on the surface, though nothing down the glass.

Overall another dissapointment.
Yet still I continue trying the new beers, every time one comes out.