Big beers in the big city

I was at home, determined not to go out on a Thursday night, wehn I got mails and calls from a few friends who couldn't resist the great line up at Bulldog and the nearby Towers.
The sultry alcoholic tremptresses included:
First up was a brief stop off at the excellent whisky bar, the Speyside Way.
They had an Iwate Kura whisky cask conditioned IPA on tap. 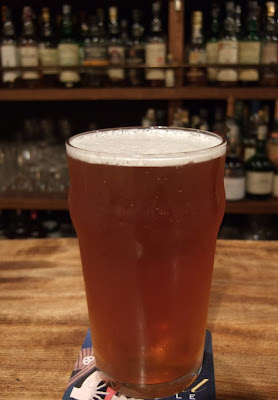 She was served too cold but as she warmed she became very nice indeed. Gentle whisky and wood notes in the flavour and nose. Not a hop monster by any means, this English IPA came across soft and smooth. Gentle yet strong. Medium to thin bodied. Nice to sip. The Speyside Way offer reasonable to very good beer at good prices, considering it is in Tokyo. 1,000yen for a pint is not bad for a craft beer (UK pints!). However, they also offer half pints for 500yen. That is hard to beat.
They say they don't make much money on their craft beers (they have 4 on tap: YonaYona and Tokyo Black on handpump and 2 guests on CO2) as their main business is in the whisky. My friend can attest to that. I left after he had one pint of the Iwate Kura. He called me less than an hour later, saying he'd just spent 6,000yen, tasting whiskies with the bar staff. They do have an impressive sleection - over 900 bottles. The staff told me that in about a week they will have Yaho's Aooni (English IPA) on tap, handpump, cask conditioned. That sounds fantastic. I can't wait. I have only known of one other time that Aooni has been on tap and that was for the Towers IPA festival. Then it was served from a wooden cask. I missed that one. I do like the Aooni and would dearly love to try it from the tap. If they stick to their prices and offer it for 1,000yen a pint, this could be a good deal indeed.
Iwate Kura whisky casked IPA: 6.5/10

Next, I venured off into the big city and Ginza, to meet up with a few friends at Bulldog.

I ordered a Ballast Point sextant oatmeal stout. I was prewarned by my friends that the regular (about 3/4 pint) came in a UK pint glass, because the foamy head was so big and hard to control). Here is the beer, after the head had 2 minutes to calm down.

As you can see, that's quite a head! It also tasted like it looked, full and creamy. The head was almost a dessert in itself. Lovely! The body was a tad thin, withnotes of roasted oats, chocolate and coffee but not too strongly flavoured. I really don't care for the aggressive coffee stouts and porters. I like coffee. I like beer. I don't want to have them both in the same glass - literally. This beer was very nice and easy to drink. However, it perhaps could be a bit heavier bodied and thicker mouthfeel wise.
6.5/10

Next I tried the Bear Republic Apex IPA: 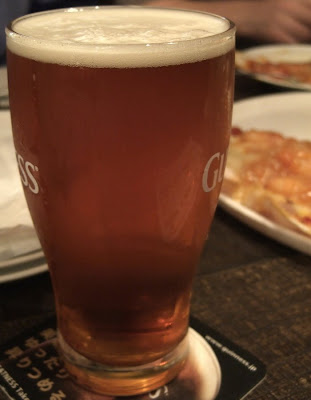 This was quite a strongly flavoured, highly hopped beer. Fruity zesty aroma and taste. I got a slight sourness that I didn't especially care for, perhaps from the combintation of hops. Not my favourite beerbut I think this will apppeal to fans of teh West Coast IPA. A hop head's wet dream? - I wouldn't know. My friend loved this one. It ws good but not my favourite of the night.
6-6.5/10


I then headed off to Towers to get a pint of the elusive Rogue Imperial IPA. I've been trying to get a pint of this beer for a while now, always to miss out by mere hours!
After checking with the owner that it was still available, I decided to start with a very reasonably priced and lovely Ozenoyukidoke IPA. 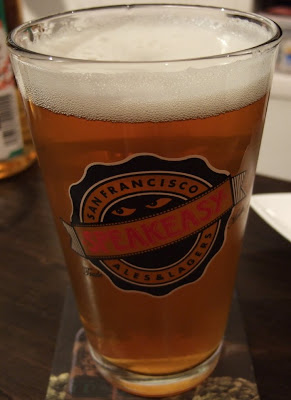 This is perhaps my favourite Japanese IPA (Shiga Kogen and Baird also do some fine examples) and at just 800yen for a pint, I couldn't resist.
The interesting thing I find about drining Ozeno IPA is that each pint at each location at each time is different. You can call that inconsistency or just marketing magic. The brewer often dry hops this beer differently for each bar and each barrel. I've had about 7 different variations, featuring single hop dry hopping with centennial, columbus, horizon, and others to multiple hop combinations. All have been very, very good. This one seemed different again. It was rather dry and bitter tasting and tasted well, smooth, somehow. I'm pretty sure the gas was the same. Interesting. A rather gentle Ozenoyukidoke IPA this time.
6.5/10

Next was the beer I really came to Tokyo for. The Rogue Imperial IPA:

Man, this was nice. The best Rogue I've had yet. Lately, I find the Rogues to be annoyingly sweet, but this one wasn't too bad. She packed apunch but was well made. Hops come through quite a bit. Fruity too, from what I remember. I was just so happy to get a pint of this that I forgot to pay attention to the taste. 1200 a pint is also not a bad price for this wonderful beer.
It's certainly cheaper than the insane price they charge for this from the bottle! Something like 3,000yen!
7.5/10
Lastly. I decided to heed my friend's advice and try the Baird DIPA again. He said it had gotten better since it was released at the Naka Meguro Taproom, about a month ago. I didn't like it much then. Far too sweet and cloying. I decided to give it a go again. 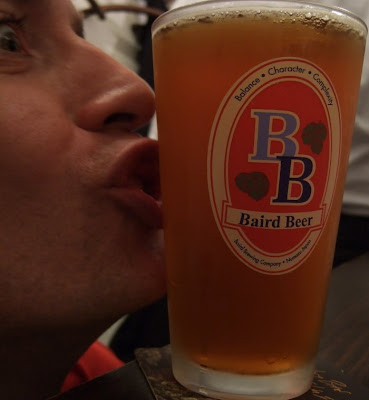 At first, this baby tasted very, very nice. Fruity and hops in the nose and mouth (that makes it sound like I snorted the stuff). But as I got to the half way point and beyond, it began to get overly sweet again. Masbe this needs more time to mature? I'm not sure. It's certainly not my favourite of Baird's beers. A lot of friends concur with that feeling too. Still, it would be interesting to grab a bottle of this and leave it for a 6 months or so. See if it improves.
5.5-6/10

Here's another pic of a beer I had the night before:
Mikkeller Stateside IPA:
Very, very bitter and highyl hopped. A monster. Good stuff. However, I do not recommend mixing this with fresh, ripe biwa from kyushu. It somehow produced a chemical reaction in the back of my throat that burned for over a day. Damn.
Good beer, though. 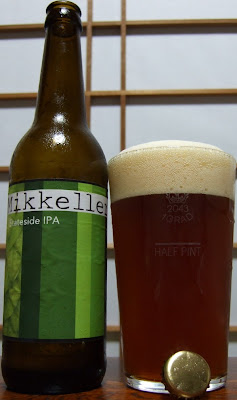