First tonight, I went to The Aldgate in Shibuya, to try the wonderful Ozenoyukidoke IPA back to back with the Ballast Point Big EYE IPA.
Some British guy had just drank the last Ozeno IPA.
What made it worse was that he apparently ordered it at random, from the guest beer list.
Nuts!
Denied!
Damn, if the Chuwy curse hadn't struck again! 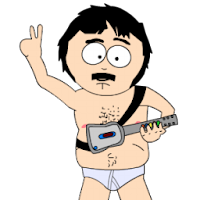 Well, at least I had one of the last Ballast Point IPAs, in a nice quiet, almost empty Aldgate: 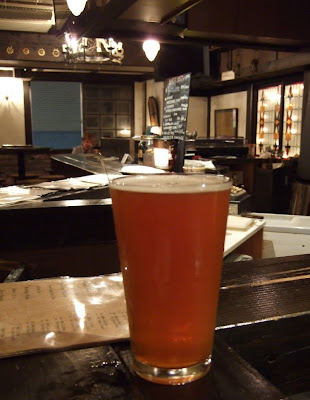 A few friends commented that it seemed more sour than usual.
Well, this pint was from the bottom of the barrel and yes, it was a tad on the sour/sweet side.
Strange, that.

Usually Big Eye is gorgeously fruity and hoppy and not too sour. Perhaps this barrel was a sour one. I had an awesome Big Eye at Thrash zone. It was a while back, probably from a previous shipment from the States. That one was dry hopped and boy, was she good! Best beer of the night for everyone.
Ballast Point Big Eye IPA- 6.5/10 (usually 8) 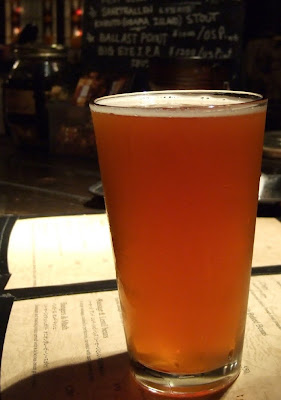 On bottles, Big Eye is possibly my favourite West Coast IPA, along with West Coast IPA (go figure), Stone IPA and Pliny the Elder. Big Eye is just so full of flavour and life. Lovely.
This one wasn't bad, and at 1200yen, was a reasonable if not good price for a Tokyo bar for this premium imported product. I just wish I had Ozenoyukidoke to compare it to.
Here's the list of guest beers (don't forget they always have some seriously good beers on tap - Harly porter, Aldgate ale, etc) that were still on last night: 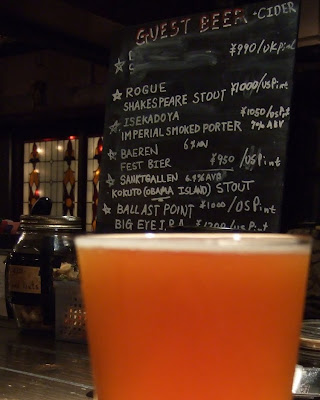 Next up was a new one for me, a smoked imperial porter from Isekadoya, in Mie prefecture. 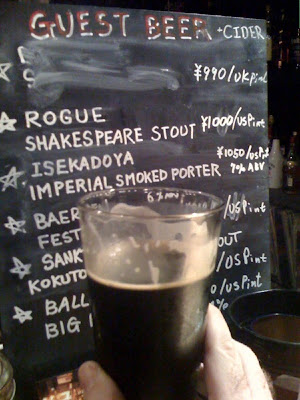 At about 7% , this imperial porter was actually lower in alcohol than the Big Eye IPA (something I often forget is the overall strength of the beers Andrew Balmouth brings over from the States, via his Nagano Trading company).
First thing I noticed was the wonderful smoked aroma. Prefect. Not too strong but definitely there. Bordering towards comfortably medium smoked, from delicate. Just right.
The taste - well, a tad on the sweet, malty side. Probably from the malt level used to bump up the alc (?). I got some lovely chocolate malts shining through. Great chocolatey flavours prevaded, along with the background sweetness (just a touch too sweet) and the smoked flavor blended expertly in the background flavours. Quite a good beer, this one.
Something for after the session, perhaps as a dessert beer with apple pie?
It is however a tad on the sweet side.
Not as chocolatey, I think and deliciously sweet as Young's Double Chocolate stout, though. Now THAT is a great dessert/choc tasting beer!
Still, quite an interesting drink.

As I was finishing my porter, I called my frend Mark who was drinking in Towers.
I checked what they had on tap and how the quality was, seeing as Towers was day 4 into their 5 day 5th anniversary event. Mark told me the Ozenoyukidoke IPA (yes!) that was now on hand pump was not the same barrel as the CO2 one from yesterday. Cool. He also said it was better than yesterdays.
I told him I'd be there ASAP.

I got there to discover that Ruination was wating to go on tap!
They just needed someone to drink the last pint of Red Rocket first.
That was something, curiously, no one seemed willing to do.
I'd had one the day before and though it was in good quality, it wasn't really my cup of tea. Not a huge fan of caramel malts.
So we waited...
In the mean time, I had an Ozenoyukidoke IPA from handpump.
Talking about 'in the meantime', here's the song, from Spacehog:
Spacehog- In the Meantime
Uploaded by Tunashaker. - Watch more music videos, in HD!

The ozeno, she was nice. A tad different from the night before. First thing was that the glass was warmer, the eber too. Not being chilled through the CO2 pump and chiller, it was almost room temperature and perhaps a bit too warm. The head was perfect. The taste very, very nice. It just needed a tad more oomph to it.

It was about then that a Japanese fellow, after listening to our Ruination predicament took pity on us and ordered the last pint of Red Rocket.
Then we spied the master grabbing another barrel of something that looked like... 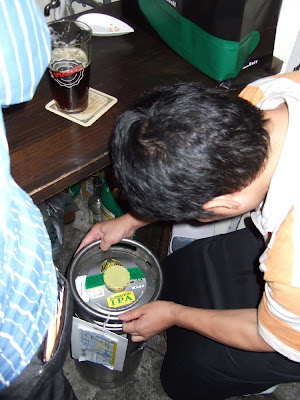 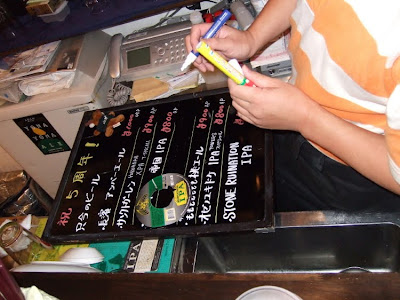 Ruination is going on!

Everyone was grateful to the Red Rocket, for making way for the Ruination: 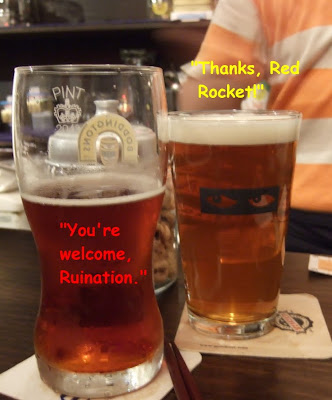 Hang on. That picture above isn't right. That's not Red Rocket! It's an imposter!
This is the red rocket. Apologies. 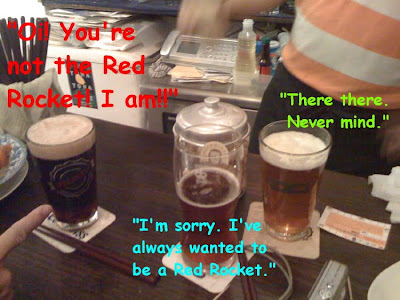 The first lucky person to order a ruination was a ghandi, hari krishna style character, who praised and made blessings to his god upon revieving the first ruination. 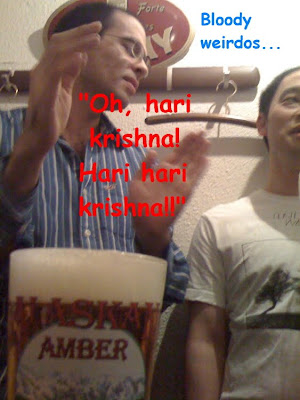 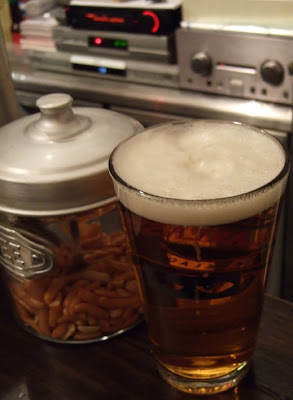 Meanwhile, the ruination was being a tad difficult.
Here you can see how hard it was for the master to pour a good pint. 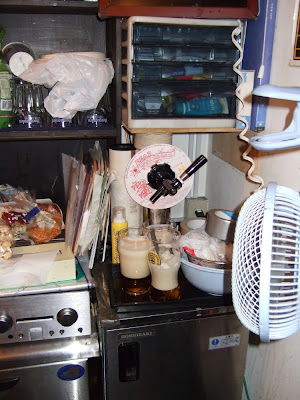 He did a good job.
1200yen for ruination for a US pint is not a bad price for tokyo. The otherwise good bar Bulldog up the road would have charged 1400 or 1500 for the same beer.
Bear in mind the 5th pint is free and you can theoretically drink Ruination for 960yen a pint. Not bad.

Day 2 was good. I left early at 10:30 but intend to go back today.
ruination is on the menu, along wiht a special oak casked Hakusekikan Super vintage.
Stay classy.