The new Baird Beer Taproom opened in Harajuku on Saturday, August 8th.
There was a pre-event opening party, the night before, but 'no friends McChuwy' wasn't invited.
Idecided to check the place out as soon as possible to opening time, at 12pm.

Here is a photo of the taproom, from the outside, taken at about 11:55am: 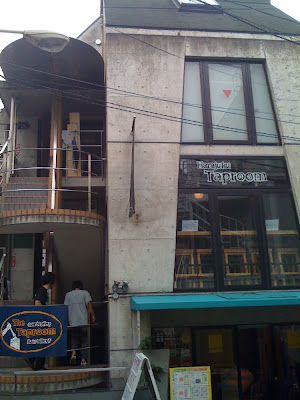 The taproom is very easy to get to, from Harajuku station. Just exit from the station and go down this street: 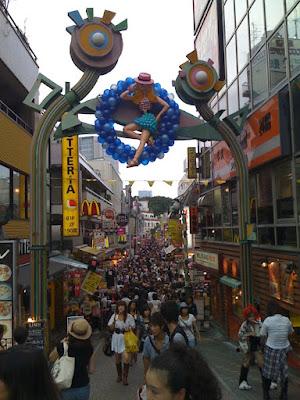 Then walk past Lotteria and McDonalds, taking the first left, after about 100m. Walk down the street and it's at the end, on the right side, 2nd floor.

Here is the door on the 2nd floor and the entrance to the bar. 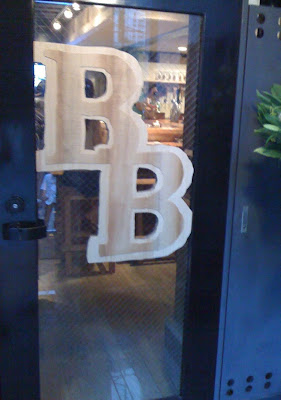 Gotta love that sign. Pretty good craftsmanship by the cool, quiet and highly skilled carpenter that Bryan employs for all the work in the taprooms. The guy makes everything. The chairs, the tables, the bar, even the beer - well, not everything.

I got to the bar at about 11:55 and they weren't quire ready for business yet.
However, they allowed the few of us who had gathered at the door to come in and sit down, while we waited for them to open.
Here's a view of the inside, from the back of the bar: 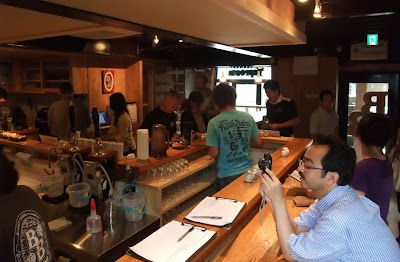 You can see the cool layout of the L shaped bar. This breaks the place up into 3 distinct areas. The mall bar area where I'm taking thie photo from, the large tabled area for groups at the front, enar the windows and the area of the bar that continues round to the left and in front of the taps, next to the the kitchen area.

Here's another view from the front, looking towards the back. 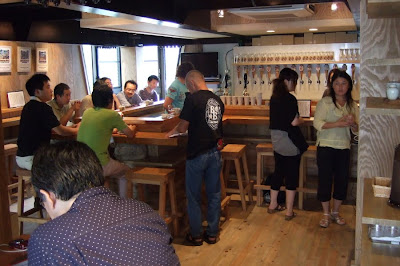 Can you see the taps? They have an impressive 15 taps plus 2 handpumps. 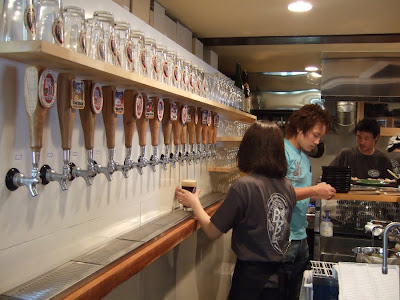 The small kitchen area is large enough to accomodate one grill (which is enough), on which they cook the skewers of meat and vegetables. Here's the new manager (you may recognise him from the Nakameguro Taproom). Great guy. 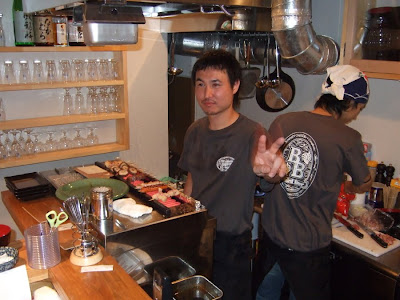 The beer list is as usual for Baird taprooms, extensive, covering a wide range of beer styles and tastes: 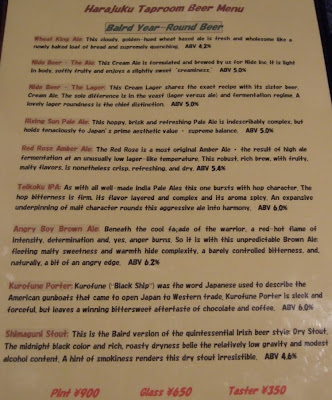 The seasonal menu featured a few new beers that I hadn't seen before, including the Harajuku celebration ale, the Pacific porter & the Bay steam lager 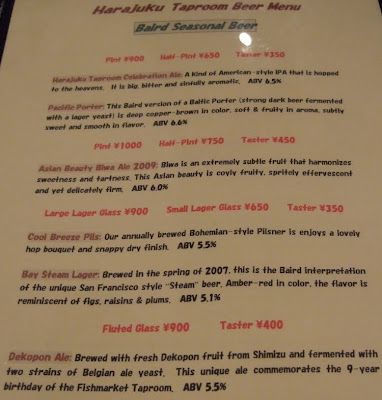 The two handpumped ales are the Harajuku ale (a slight variation on the popular European Summer ale) and the Workingman's dark mild ale.

As you may know or noticed from the menu pictures, a pint costs 900 yen. However, if you buy a nonbei card (a stamp card for pints or half pints - 6,500yen), you can pay for 10 pints (9,000yen) and get 2 extra pints, free. That works out to 750yen a pint. Not bad, especially by Tokyo standards. It makes the value even better, when you consider just a 5-10 minute train ride would add about 300yen to the price of your Baird beer, if you drank it in another craft beer bar in Tokyo! 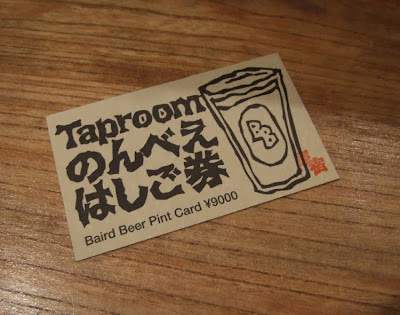 "Right, only 12 pints on this card, so I've gotta pace myself..."
I started things off with a Harajuku ale. The handpumps were working well and all the beer I tried was being served in very good condition. A good sign. 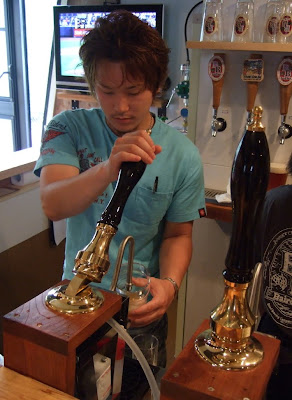 Do you recognise this guy?
Another fellow from a taprooom but this time one of the brewers from Numazu.
The Harajuku ale was lovely. Here is the description from the English menu:

It was indeed refreshing and very, very drinkable. So drinkable that I forgot to take a picture of it. Sorry.
Harajuku ale: 7/10
Not long after I arrived, Marco and his gang came in. He holds regular meet ups through his group of Tokyo Beer Meetup friends. A nice friendly group of people who meet up, through beer events or beer bars. Here's the link, if you are interested in signing up. 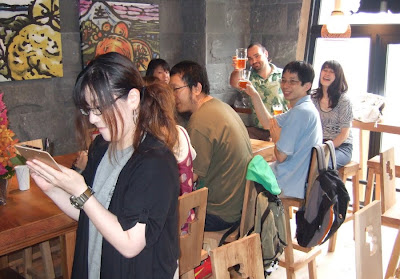 Good people.
Can you see another Baird person?
She was very busy, working the floor on Saturday. You may remember her from the Nakameguro Taproom.

Well, all this talking is making me thirsty - time for beer!
Here are the nicely bitter and hoppy Teikoku IPA and the new Bay Steam lager: 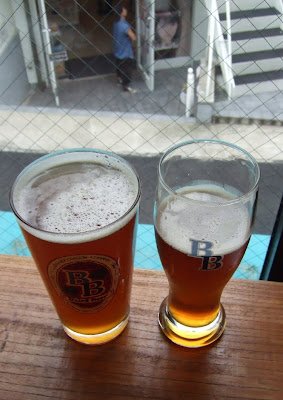 I liked teh Teikoku but then it is one of their falgship ebers, along wiht the fruity hoppy American pale ale, Rising Sun. The Bay Steam though, I didn't care for that much. Freinds I were drinking with did like it, though, so it must have just been me.

The kitchen was by now firing up and the smells were lovely. Unfortunately, I only had money enough for beer and could only watch the plates of delicious looking meats and vegetables pass me by. I could have perhaps asked the midget in the kitchen if I could have a 'little something', off the books. He may not be able to see what he's cooking, but what he cooks turns out pretty good. 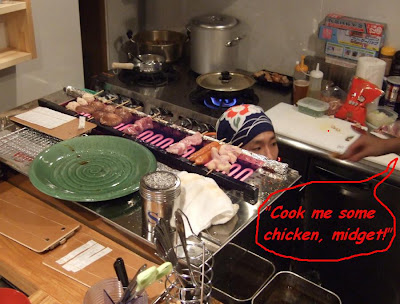 I think it's great that Baird is an equal opportunities employer.

By now I was well into at least my second pint. I think the second pint I had was the celebration ale. The aroma promised wonderful amounts of hoppy flavor. It was indeed as hoppy as I had hoped. However, I felt the hop bitterness dominated, more than the fruity zesty flavor I was expecting. It could have perhaps done with a touch more malt in the base, to balance out the bitterness. I say that only because I was expecting a much more hoppy version of Rising Sun. Instead, what I got was a much more hoppy version of Teikoku IPA. More British and bitter than American and fruity (are we still talking beer, here?).
Still, slight suprise aside, it was a very nice beer. One I know I shall be ordering again (I did, many times). 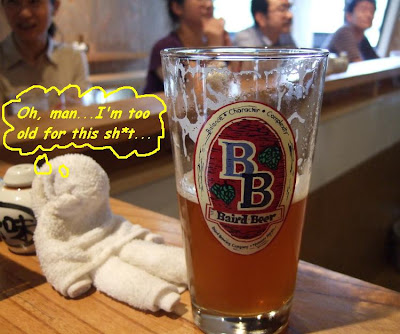 There were moments when I was starting to feel the pace. Not having eaten breakfast (unless you count a strong coffee as breakfast) was starting to feel more and more like a bad idea.
I took Bryan Baird's advice and got myself a nice pair or Workingman's dark mild ales (well he never actually told me to get two.). 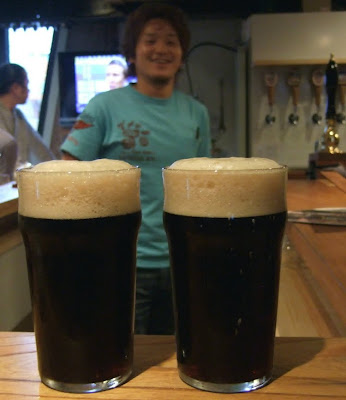 Here's the info, again from the English menu:

I was a bit concerned, as I'd had aBaird mild before and found it, well, very mild. Weak, almost. However, this one, whilst gentle and mild, was delicious. It looked stronger, due to the color. The body though was nice and light. Good taste. I agree with Tim E in that this was a very fine example of the style. Goood beer. A difficult beer to make well and I feel that Baird have made this one quite well.

The taproom also has a nice large screen TV, which shows most sports games in Japan. I'm not sure if they have J SPorts or SkyPerfect, so I'm not sure if the international soccer or rugby game can be shown live. The game that was being shown when I was there had the makings of a classic. Ny Yankees vs Boston Red Sox! 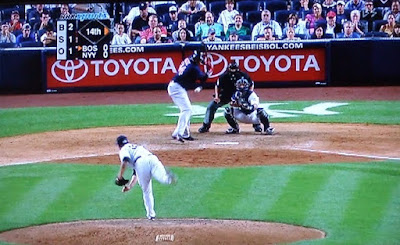 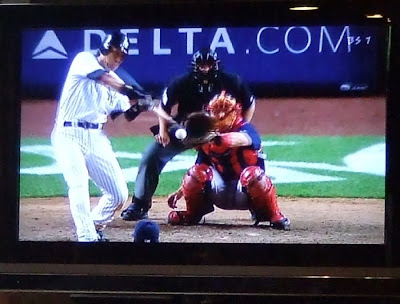 Nice!
(I'm an Ichiro fan, myself.)
Here's a nice side on shot of the handpumps (I'm still talking beer). 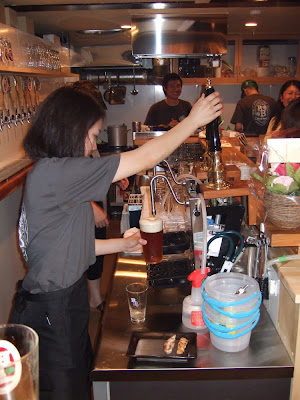 The beers were good all evening. The Harajuku ale was off pump for about 2 hours, as the new barrel needed a little time to breathe. Never mind, a great thing about Baird Beer Taproom is that there are plenty of other good beers to choose from!

Nobody seemed to mind in the slightest. We all had beer, conversation, yakitori and good times!

Marco was working the room, doing his thing: 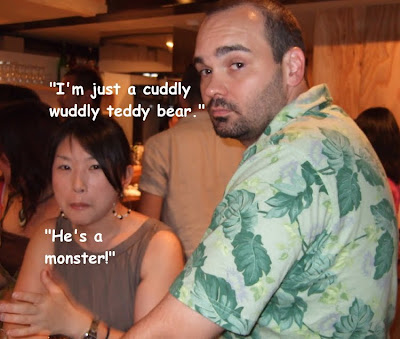 I was in the toilets, doing 'my thing'. I like the toilets - the main door has a section missing, so you can see if someone is washing their hands and avoid opening the door embarrassingly into their face. You can also take sneaky artsy (creepy?) shots of people, from inside the toilets: 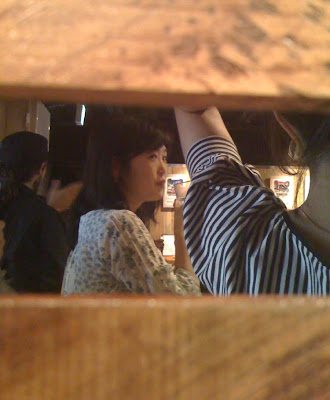 Reminds me of the old joke, with the little boy saying
"Mommy, mommy! Can I play with Grandpa again?"
"Now now, dear, that's the third time you've dug him up this week."

My good friend Glen was also there, 'talking' to some locals.
He is a good boy now.
I can attest to that.
Before, though, is anyone's guess. 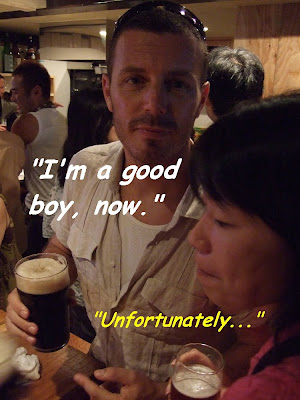 I met quite a few people I knew from before.
Super amazing "shhhhh! - I never said homebrewer!" homebrewer, 'Leve Stacey' turned up, with his son (both great people and a pleasure to meet your son, Leve!).

Here is a shot of the latest brewer at Fujisakura (I think they are getting better looking all the time!) and the young brewer from Canadian Dieu du ciel beer, Luc Lafontaine (Man, that is an amazing name!). 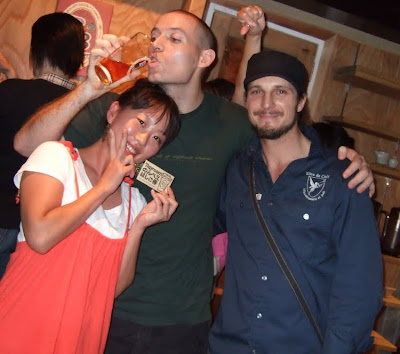 Great guys. Great beer, too! Watch out for this brewery in the near future. I've a feeling they're gonna be bringing some of their stuff over, very soon. 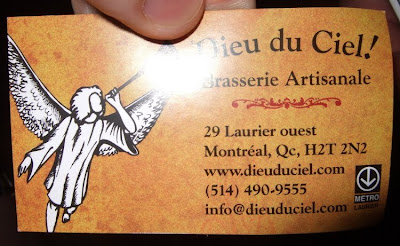 They are having a beer event in Ushi Tora, on the 15th. I think he's brought 10 barrels over with him, so it should be a great event!

By now, the evening was getting longer and people were giving up and heading home.
Not this idiot.
Me and my pal Buck here stayed on and drank through the evening.
Nothing like a pair of silly drunks to complete the pub atmosphere. 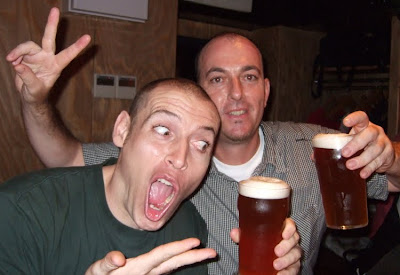 Buck was kind enough to not only buy me one Harajuku ale, but TWO!
"Cheers, Buck!"

I later tried to buy him and myself a pair of celebration ales, but the barrel had been drank. Guilty as charged, your honor.
Instead, we had a Rsising Sun and a Teikoku.
Both were very, very good but I agreed with Buck in tha tthe Teikoku just edged it over the Rising Sun.

I finished the evening off with what could be a Big EYE IPA. 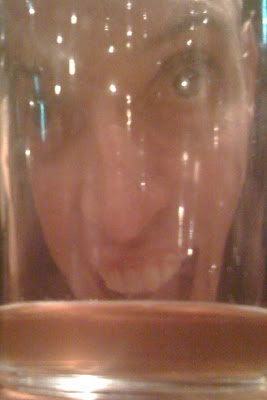 It was then after 12 and the place was closing. I could well have been the first person there and the last one to leave.
It was a good evening.
The Harajuku Taproom. Reccomended. 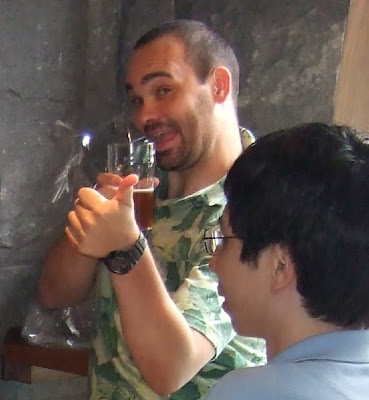