Enjoying my time in 'Tha Zu'!

Numazu, to be more precise.

FINALLY made it there after multiple delays on the Tokkaido line.
Arrived to find DH, his lovely other half (not Nate- not that Nate isn't lovely! Not that I think Nate is lovely. Lord,where am I going here? Not that I'm confused with my sexualiuty. I'm doing it again. not being confused, well ,yes, just not sexually.I'll stop now.), Chris Poel, Bryan Baird and Nevitt Reagan enjoying a few beers.
It was good to finally meet Mr.Reagan.
I'll have to hook up with he and his freind who I know but for the life of me I can't remeber his name (I'm a faces guy - not saying that in a disgusting Japanese adult orientation in terms of where a 'certain act' finishes, rather I remember faces - urgh. Often, I say too much).
Here they are: 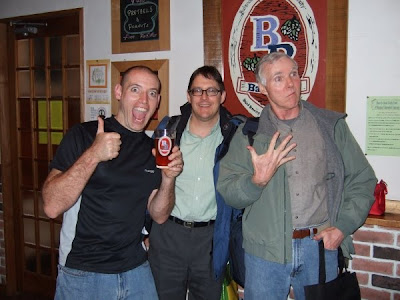 It was good to finally meet the man/men.
The beer last night was nice. Alas, some beers I wanted to drink had been drunk and finished by DH.
Grrrr! The Chuwy curse struck again!
The imperial IPA was nice. The 6x2 was gone, as were the simcoe, centennial and others.
I had the rye, the imperial pils, the imperial IPA, the yabaiyabai scotch ale, the kurofune and some Kentucky ale.
Nice!
I forgot to bring my silver balls, so I did an alternative. I took a small mikan/yuzu/lemon(?) with which I had previously tried to impress the barmaid by juggling and dropping on the floor and squeezed it into my DIPA. 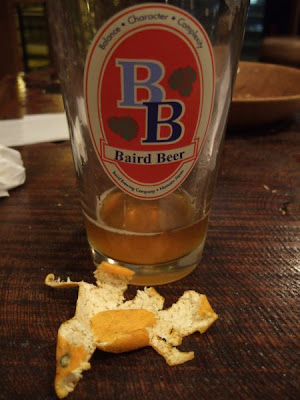 The aroma was nice but the flavor didn't infuse.
Still either way it was a nice beer. Had a few of those last night! DIPAs, not mikans.

Played some kind of game DH brought. Not sure how, but I built up the winning score. 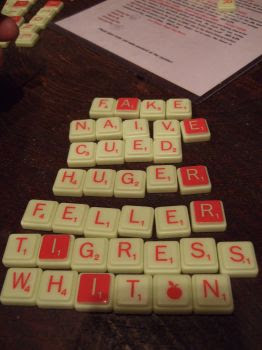 Must have been drunk.

Gotta post now. My time in the internet cafe is up! Out in the sun for breakfast and adventures!
Beers4Books today! 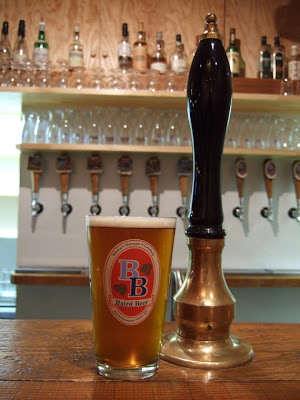