I gotta sickness & the only cure is more pils(ners)!

Hello.
How are you? You okay?
Why don't you just lay back and relax and let me tell you a story about the wonderful beer style known as pilsner.
I might be right, I might be wrong.
I probably will be wrong (most certainly drunk) but I'm gonna tell it anyway...


The year is 1842. The town/city was Plzen, in the kingdom of Bohemia. The city had founded a brewery in  Bürger Brauerei (Citizens' Brewery - now Plzeňský Prazdroj) after angry citizens continuously complained about the changing quality of the beer (in 1938, they dumped whole barrels into the streets in anger!).

The new brewery wanted to brew in the Bavarian tradition and so they brought over a brewer from Munich called Josef Groll, to help them do that. Using his brewing technniques, together with the soft water of Plzen, the saaz hops from neighbouring Saaz (Zatec) and the famous pale coloured moravian malt, he produced a pale coloured, bottom fermented beer (most beers at that time in Bohemia were darker and top fermented, like ales).


So began the world's first Pilsener or pilsner beer.

In 1898, it was named Pilsner Urquell, from the German for "the source of the pislner"
This amazingly clear, golden lager took the world by storm.
It remains today, in one form or another, the most widely made/imitated style of beer - from the first Pilsner Urquell, to the more commonly found Budweiser (the less worthy American version)

Today, I'm gonna talk to you about 3 excellent examples of some of the world's finest pale lagers (I just also happen to be drinking them! Win win!).

So, let's start with the original:
Color:  A wonderful sgolden straw. Very clear. Nice foamy off white to white head.
Aroma: Good aroma of saaz hops in here. Bitter and aromatic with malt tones.
Flavour: Dry, hoppy, crisp. Good beer. These green bottles might be slightly skunked though. Brown would be better but they have their silly image to thnk of (marketing team like the image the green bottle has generated and won't change to brown bottles).
I pick up a little cardboard flavor and it's lacking freshness a bit but still not bad.
I love the malty flavor I get from it on tap. Nowhere near as good as the real orginal, brewed way back in 1842.
Tip: If you ever got o Prague, take the bus/train to Pilsen and take a tour of the brewery. go to the underground cellars and try the real unfiltered, unpasturised Urquel pilsner from the oak barrels. GORGEOUS!!

With the success of Pilsen's golden beer, many others started brewing their own versions of this wonderful pale lager. Dortmund in Germany started brewing pale lager in 1873. They became famous for their  Dortmunder Export.
Soon after, in 1894, pale lager finally came back to it's roots (arguably!). Munich.
Spaaten of Munich made their own pale lager which they called helles. This is German for 'light coloured'.
a helles lager is not as up front hoppy as a pilsner, nor as dry. Instead, it is a much gentler, lighter, maltier tasting beer.
Spaaten made the original helles and their still remains one of the most delicious and easy to find examples of the style. 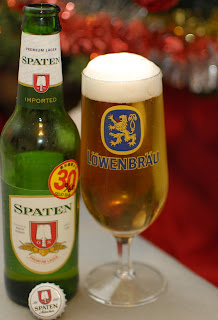 Color: lighter than pilsner, golden. clear and bubbly. Nice foamy, white head.
Aroma: Good malt aroma wiht a hint of hops.
Flavour: Nice crisp, light taste. Malt in the back end ooer! Again green bottle grrrr!
A little dry but nice malt flavor in here. Not as dry or bitter or hop forward as the pislner. A good light alternative. Made for quenching ones thirst with.
Good beer.


Now I'd like to come back to the orignal style concerning this post, the pilsner. I'd also like to handily combine the Czech style of pislner with the country which spawned it's brewer, Germany. Let's talk about German pislner.

Especially true in the north of Germnay, pilsners tend to become drier and quite hoppy. Utilizing the German noble hops, these are actually some of my favourite flavoursome lagers. Jever is probably one of the most famous. Becks might be another one (first German company to use those bloody green bottles).

for my example, I decided to go north, really North!
The most Northelry brewing town in Germany, in fact. Flensberg. 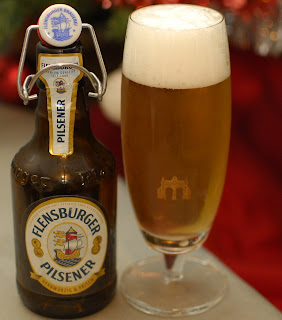 Some of you may have noticed the cool flip top bottles these guys push out. You might also have noticed the slightly hefty pricetag. It's worth it. They make an excellent pilsner, among many other brews. Still a small company (about 120 employees), it remains one of the last nation wide breweries not owned by a larger group (Becks being a great example of the huge scale).

Colour: This one looks great, kind half way between the two previous. Huge, billowy, white head.
Aroma: Malty aroma with hints of sweet paper? Damaged?
Flavour: Tastes not great and may be skunked slightly? Dry but with paper tastes or carboard flavors evident in small amounts. A good dry finish. Lots of malts in here but those hops might be skunked. Not sure. Not as bang on as I know this beer can and should be.
Brown bottle. Oxidised? Getting butter in the back (ooer!) - daicytel?  Weird. Never had a Flensburger this bad. Typibloodycal. Chuwy curse.
I like the dry finish tho. A good dry pilsner. A little thicker bodied than I remember though. Not bad but not my favourite today.

I'll just have to try them again. How about you?
Why not try the variad pilsners out there, Czech, German, Australian, Japanese, American, etc.
See if there is  a particular 'style' within the style that you like.

In Japan, one of the best Czech pilsners is made by Nihonkai Club Ishikawa, by a Czech brewer, no less. Excellent full bodied and hoppy but good pilsner malt flavours to back it all up.
German pilsner, I highly recommend Bayern Meister Bier, brewed by Stefan Lager (yes, his name is Mr.Lager!), a real German Brau Meister (think of it as a beer Professor) from Germany, living and brewing in Fujinomiya. Both great beers.

If you have any recommendations of your own, please comment!
for example, I haven't had a single American pilsner yet that I've liked. Not one.
Do you know of any good ones? Noble pils, no thanks. Doesn't do anything for me.

Thanks for reading. hope this post was of interest.