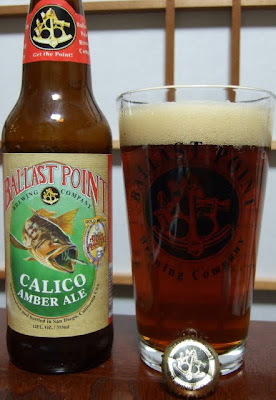 If you read my previous post, you'll know I'm not an amber kind of man.
Never did care much for the style.
Some may say it's because I haven't had the right amber ales. I usually ask them "Which ones should I have? - then I answer that I've tried most of them and haven't been impressed.
I must stress I'm not finding fault with the beers. It's just that I don't really care for the style.
Don't really like the sweet, tart caramel malt flavours. For me it's re@pellant and disgusting.
I'm weird like that.
The only 'amber ale' I can drink and will and indeed do pay for is the Greenflash Hop Head Red, but that is kind of a special beer. Similar to the calico in that it's a kind of amber/red ale hybrid.
I do prefer the hop head red.
Well, Calico is a well made amber ale.
In peak condition, I can drink this.
This calico,however, rather like the prohibition amber I had last night, tastes too tart and little off?
Don't particularly care for it and my first impression was 'urgh'.
Now, I find the glass is almost gone!
I drank it so fast.
Still, the end is so tart.
I have to think this isn't in perfect condition. On-line, I occasionally read references to a tartness.
Maybe it is meant to be there?
If so, I don't care for it. Almost sour, in smell and flavour. Not overwhelmingly but it's there.
I won 4 bottles at a beer event and I dread to open the other 2.
At least I didn't have to pay for them.

Calico Amber Ale 5.5/10.
Maybe this bottle was off, too. I swear the first time I had this, it was 7.5/10.
I think it's better than the prohibition but I wouldn't pay for one unless there was little other option at the bar. In defence of the Calico though, I had a lovely glass of it at one of Andrew Balmouth's functions and Real good. It's what persuaded me to buy a bottle.
The 1st bottle I ever had was really good.
The 2nd was nice.
The 3rd was nasty, really nasty.
A friend also had a bad bottle of this and another friend had a bad pint in a bar but that may well have been to the bar not cleaning their pipes correctly.
I have to assume that the occasional bottle of this goes bad, so be careful when you buy it in bottles.
Check whether the shop keeps them refrigerated.

I think I come across as an anti amber ale kind of guy.
Yes, I don't particularly care for Amber ales but I have nothing against them, personally.