Yes, Stone's 13th Anniversary ale and Ballast Poitn Skulpin IPA are now on sale in Japan.
I picked up a few bottles, tonight for a private danc-tasting in my own home.

The dancer-big boy beers on offer tonight are: 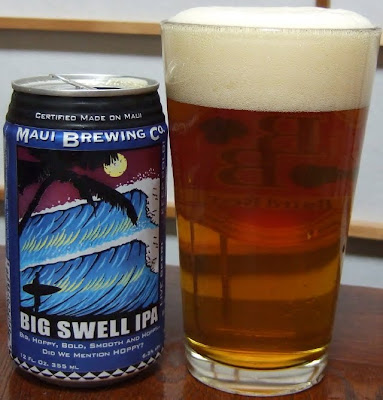 From a can.
Pours gassy and a light, almost cloudy white head. A transluscent, pale colored body. Very clear.
Smell is very nice and hoppy with a generous malt nose.
Tastes quite nicely made.
Not too heavy. Malt dominates then hop bitterness, then hop flavor then malts gain but not overly sweet like some other brews.
Not a bad beer but not my favorite. It just seems to lack real character.
Real oomph factor.
Still, a nice choice to start off on, tonight.
As it goes down, it gets more malty hoppy, if that makes sense.
The body gets heavier and thicker tasting.
What started as crisp and clean is now a tad cloying.
Not my fav IPA but not a terrible job.
It just seems they are trying to hard with this one.
There is a lot of hype around Maui Brewing at the moment .
Nagano Trading (the importers of Stone, Greenflash, Speakeasy, Coronado, Southern Tier, Great Divide, etc.) held a Maui opening event at Drydock recently, for a select few.
I couldn't make it (was homebrewing!). They had on tap a few very, very special beers that would not be available even in the US, so it was a special event indeed.
I must say, this IPA is good but nothing fantastic.
6.5/10
Not bad 'for a can', although there may be argument over whether a can is indeed better than a bottle. I'm not going there.
Where am I going?

I need some music.
I need some more beer.
The Big Swell has now swollen and burst and not I'm just left with some rancid, insepid raw sewage at the bottom of my pint glass. Not even close. It's still very good.
It's also about to be consumed.

Sedimental fool that I am, I bid farewell to the last of the Maui and look forward to the next imbication. 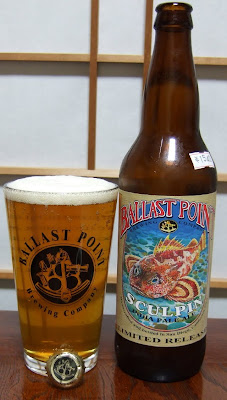 I heard a lot about this beer, most of it from Andrew Balmouth, the guy who imports the stuff over at Nagano Trading.
He's a great guy and a man who apreciates a good beer or seven, rather like myself.
He told me this is the one we need to drink together.
He promised we would go out to the bar where he 'may' have a keg of this limited released beer and get ourselves into a 'happy state'.

Great review in Beer Advocate by BuckeyeNation. I actually agree with almost everything there.
Great beer. Started with a nice pouring, light, almost off white clouds head, with an almost transluscent body. I could easily see thru the other side and the body appears...damn, I just drank my pint - lucky I have the large bottle and can refill... ...the body now re appears and it is - don't take this the wrong way but it appears a light, almost tangerine urine colour. Not such a nice image but an interesting color and suggestively clear body suggestion for this IPA.
The smell is bloody hell!
It's great. Fruits, tropical, sensual, inviting. They seem to scream "Oi!! Stop smelling me and get me down your bloody throat!" It's likely this very beer is made of attractonium (a rare element indeed, only previoulsy found in my big baggy grey sweater, that resulted in numerous ladies being 'attracted' to an otherwise uninteresting specimen - namely myself), as the very moment you go in for a sniff, the beer itself seems to drag you in and you find yourself losing your balance and before you know it, you've downed half the pint! The sneaky bastard!
I'm now on my second glass and it just gets better.
My goodness.
It started out as a simple interest, grew into attraction, now it seems it's developing out of control into pure obsession.
As it warms, it just gets better.
A truly enjoyable session beer here?
Sessionable, perhaps, but not for the faint at heart.
This baby comes at a price. After this, anything you drink just won't be the same. AMAZING flavors smack me across both sets of cheeks.
The lacing left on the glass is perfection and very sexy, almost like a set of lace stockings, inviting, alluring, with no cross dressing hairy legs inside to suddenly send you gagging but instead the promise of riches and pleasures untold. feminine and in control. Complete, hypnotic, undeniable control.
Don't fight it. go with it. Drink some more...

Wow.
This is one of the best IPAs I've ever had.
It didn't start that way, but now I feel a spell has been cast.
Lovely.
Just lovely.

Still, the colour looks a tad light but the flavours are fantastic. I think the low malt profile and perhaps good filtration is the reason why this colour is like it is. Almost thin but not quite.

A very good IPA.
I do like Pliny the Elder and a few others, including Stone IPA.
This is a unique fruity hoppy IPA that isn't as malty as a Big Eye but is just as flavorful.
Lovely.
8.5/10.

The smell could perhaps be too overpowering.
The body too thin and light in appearance.
Initial flavour could lack body but give her time.
She will grow on you.
Damn.
Apologies to religious peole but DAMN! A fine beer.
Now, if only they made the Victory at Sea with less vanilla, then there would be 2 amazing beers.

Andrew, if u have a fresh keg of this stuff, consider ourselves very, very drunk!
- as long as it's not at Craftheads.

Next up is
Stone 13th anniversary ale:
I must admit, I've already tried the 13th, in BrewedinJapan's home, whilst actually helping to brew a batch of beer! Yes, That's right, Chuwy has stepped across the threshold and is now entering the exciting and fantastical world of home brewing! More on that in a future post.
The Japan homebrewing world shudders.
For good reason.
I'll probably poison us all. 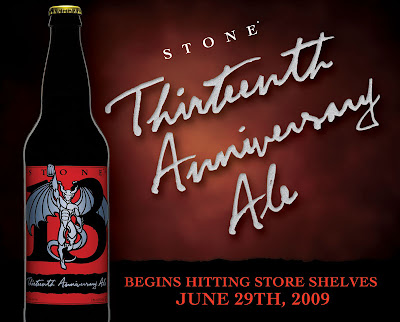 I kind of agree wiht the top reviewer for Beer Advocate.
Yes, very Arrogant Bastard like.
Considering they've 'used more pounds of hops per barrel than any beer' they've ever , made, I too was slightly dissapointed.
Slightly.
It's still a glorious beer. Just not quite as hops dominated as I was lead to expect.
Esxcuse me...gotta pee (this review is typed in real time)... 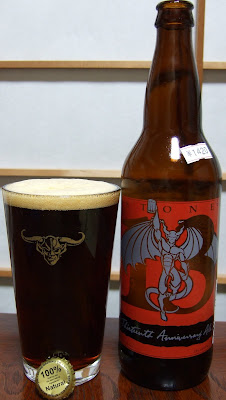 I have now poured the remainder into my (US) pint glass and it is slightly more hoppy. I even turned off the music, in case sensory deprivation played a part in overall sensual sensitivity, in terms of aquiring an overall beer sense.
Slightly more hoppy this time but not as apparently hoppy as the first time I tried this at a friend's home, just a week earlier.
Then it seemed lovely and very hoppy and flavorful. now, it appears to be a younger, more lively version of Arrogant Bastard.
At least I guessed the style right, at being a kind of Imperial Red Pale Ale.
I think it would have been better without the confusing chocolate malts.
Never mind. A good beer but not what I was expecting or Peter Pan/Santa Claus/Disney/nobody gets gang raped and publicly executed in Africa hoping for. 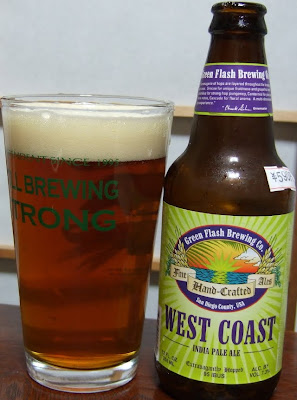 More 'normal' body colour. Slighty darker, slightly more solid head. Slightly less hop head, almost gone but still there. The smell is even crisp and clean hops.
Quite a bit pf grapfruits there.
Tastes clean and brisk. Not as fullfilling as sculpin. Man, now im really addicted to trying more of that stuff
It's weird, Sculpin's malt profile was there but not evident obviously and the taste, West Coast seems not there but its evident in the mouthtaste. It's purer and dryer in hops but denies u the malts balance. Man, its pure hops. Wow! Nice stuff but occasionally I need me sum malts. Great label design matches the hops profile nicely. Very green and fresh
7.5-8/10
Now I gotta pass out. Listening now to Long as I can see the light by CCR. Great song.
It's now 2:01am and it's getting mighty late.