Too drunk to remember much

Yokohama beer fest was a blast.
I wanted to go back today but woke up too late and got Sat and Mondays opening times mixed up. At 3pm, I figured I still had 2 hours or so drinking time left then realised the thing closed at 4 on Monday. Doh!!!
Should've woken up earlier.
Gonna look for a list of winners and post it online.
Don't remember much as I was a bit tipsy.
Met soooooooo many poeple, olod fends and new ones.
Here's a pic from the start. 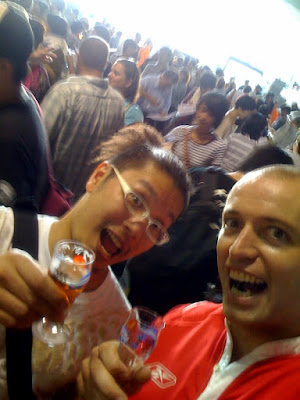 This guy is either a cow or a tiger. One half of the famous UshiTora craft bar in Shimokitawa. Great guy. I always get confused as to which guy is the cow (Ushi) and which guy is the tiger (Tora)!

I do remember Yokohama got gold for their weizen, Nihonkai Ishikawa silver for their pilsner.

I also managed to pick up silver medal for the most annoying person in the festival! 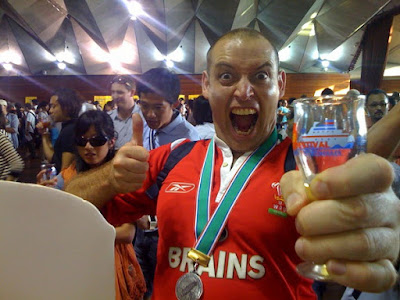 "Woohoo!!!!"
Someone else must have got silver for something because I'm wearing their medal!
I just don't remember who...too smashed.

After the festival, a few people headed to the Nakameguro Taproom to meet up with the New Zealand brewers from Tuatara brewing. Had a great evening drinking, tasting and chatting with them (tasting their beers, not THEM).

This is one of the brews I remembered as being very good: 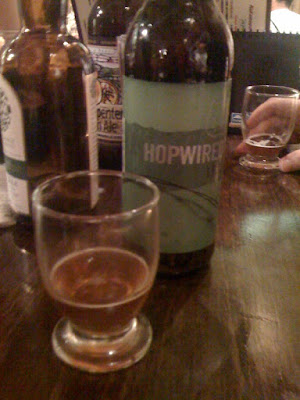 Here's a pic of a few of the guys from last night: 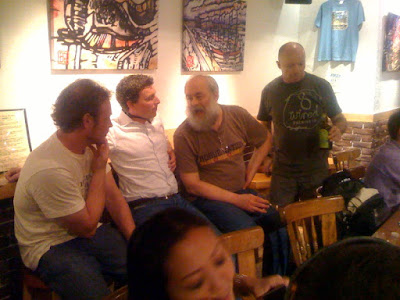 L-R: Ry Beville of Japan Beer Times, possibly the business guy/investor/brewer from one of the New Zealand breweries (sorry, I talked to you but I was very very plastered and can't remember!), Phred Kauffman (importer of Rogue, Mikkeller and many other fine beers as well as owner of Mugishutei craft bar in Sapporo), Dominic Kelly (manager of Hashigozake in Wellington, New Zealand and representative of the New Zealand brewers.
A good crowd turned up to taste and give feedback on the New Zealand beers.
The first time for them to come over here.
Look out for these beers in the near future!